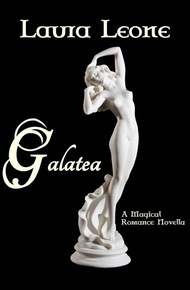 Laura Leone, the recipient of several Romantic Times awards, has published fifteen contemporary romance novels with multiple publishers. Her novel Fallen From Grace was a Rita Award finalist and has been listed by DearAuthor.com as one of the best 100 novels in the romance genre.

Under her real name, Laura Resnick, she writes the popular Esther Diamond urban fantasy series, whose sixth book, The Misfortune Cookie, will be released by DAW Books in Novermber 2013. Featuring the supernatural misadventures of a struggling actress in New York and her bumpy romance with an NYPD detective, the series has received enthusiastic praise from Library Journal and Publishers Weekly. Her epic fantasy novels for Tor Books made several "Year's Best" lists and have been described by Publishers Weekly as "a marvel of storytelling."

You can find her on the Web at LauraLeone.com.

Radley Barrow is a gifted sculptor, totally devoted to his work, but he has no talent for love. Until one day, like the sculptor Pygmalion who loved the statue he named Galatea, Radley’s obsession with his work leads him to fall passionately in love for the first time in his life... with the womanly image he’s creating from a mysterious hunk of marble he’s found hidden in a secret cavern beneath the streets of modern-day New York. Alhough a lonely artist can’t find happiness in the cold embrace of a marble statue, sometimes love can work miracles. Life, however, tends to have a way of complicating miracles...

He tossed and turned half the night, lying naked between hot, damp sheets in the hollow privacy of his bedroom. Mama Strega’s rich, weathered voice haunted him, her words echoing through his mind like a prayer, a promise, a chant.

You have only to kiss the waiting lips of she whom you love, and no matter who she is, she will then give her love to you.

He should have seized one of the pretty, smiling, sloe-eyed women at the party, planted a kiss on her, and gotten this out of his system. But even if the love potion were real, the last thing in the world he needed or wanted was another woman in his life.

As he stirred restlessly in his empty bed, he also recognized that no living woman could take his mind off Galatea, anyhow. Seeking comfort in another woman’s arms wasn’t the answer. But what was? What would free him from this insane, unbearable yearning for a statue?

No matter who she is, your kiss will now awaken her heart.

“No,” he moaned in protest, even as he swung his legs over the side of the bed and reached for his jeans. No. He mustn’t go back down there!

He thought of a dozen good reasons why he must steel himself against the impulses racing through his body and directing his footsteps to the door. He called himself harsh, cruel names as he crept through the restaurant, now quiet and dark. And for the first time in many years, he prayed fervently, begging for help and for strength, as he unlocked the heavy, hidden door that Mama Strega had first revealed to him months ago.

But as he descended the dark winding staircase, finding his way by touch and by instinct, his heart pounded with the eagerness of a lover going to meet his beloved. And whether it was a sixth sense or simply the first flowering of fatal madness, he believed that she awaited him just as eagerly.

She was his beloved, whether that was right or wrong, absurd or pathetic. His final capitulation to the dictates of his heart left him dizzy with relief, because the struggle was over. He approached her in the dim light of the flickering flame, which still burned miraculously after a whole day in this chamber, and let himself worship her without shame.

She was tall, and her pedestal was high, so he wrapped his arms around her thighs and leaned his cheek against the lush mound of her belly. Cold, oh, she was so heartbreakingly cold to the touch. He wanted to warm her. He turned his face into the unyielding hardness of her stomach and kissed her softly.

“Oh, God,” he whispered, but it was no prayer for salvation. He would die before he would leave her again. He had been a fool to run from this last night. There was no escape from something this powerful.

Trembling with passion, he stepped up onto the pedestal, bracing his feet between hers, and buried his face between her marble breasts. Her buttocks were solid and lifeless beneath his questing hands, but so plump and ripely curved that he groaned as he cupped and caressed them. He rubbed his cheek against the chilly globe of one rigid breast, whispering her name, wishing he could give her pleasure. His palms slid up over the smoothly textured length of her back, and his belly pressed against hers in bittersweet, intoxicating longing. He looked into her face, marveling at the beauty of her high cheekbones, her strong jaw, her delicate nose, her wide, sensual mouth.

Your kiss will awaken her heart...

“Galatea.” He murmured her name will all the love that tormented him day and night. “Please. Please...”

Her marble lips were cool and slightly dusty beneath his. He closed his eyes and tightened his arms around her, wishing, yearning, dreaming, believing... Believing that, for a magic moment, he could feel her mouth soften beneath his and return his kiss. Believing that her lips parted slightly to let her breath mingle with his, that her neck relaxed its eternal pose to let her head tilt slightly, that her skin warmed beneath his hands, becoming soft and pliable as a woman’s flesh, that her arms lowered from her own hair to touch his... Her fingers brushed his cheeks and rested on his shoulders, squeezing lightly as she opened her mouth beneath his. He tasted her, delirious with pleasure as she shifted to get closer to him and slid her arm...

Radley’s eyes flew open at the same moment he flung himself away and fell off the pedestal. Sprawled on the hard floor, he propped himself up on his elbows and gaped in shock as she came to life above him.