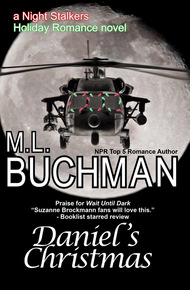 Dr. Alice Thompson discovers a covert strategy to create diplomacy with the most reclusive nation on the planet. She needs all the help she can get.

Daniel survived flying with the Night Stalkers in The Night is Mine.

Alice’s discovery launches him once again into dark and dangerous skies. But on this flight both his life and his heart are at risk.

The only man in our group, M.L. Buchman burst on the scene with his hard-hitting action romances. “Daniel’s Christmas” will make your heart pound.

Daniel Drake Darlington III pushed back further into the armchair and hung on for dear life. Without warning the seat did its best to eject him forcibly onto the floor. Only the heavy seatbelt, that was threatening to cut him in half he’d pulled it so tight, kept him in place.

“You never were the best flier.”

Daniel glared at President Peter Matthews as Marine One jolted sharply left. They occupied the two facing armchairs in the narrow cargo bay of the VH-1N White Hawk helicopter. The small, three-person couch along the side was empty. The two Marine Corps crew chiefs and the two pilots sat in their seats at the front of the craft.

President Peter Matthews sat back casually. Apparently all the turbulence that the early winter storm could hand out had not interfered with his boss’ enjoyment of Daniel’s discomfiture.

“And why would that be?”

The President knew damn well why his Chief of Staff hated these god-forsaken machines. Even if Marine One was probably the single safest and best maintained helicopter on the planet, he hated it from the depths of his soul along with all of its brethren of the rotorcraft category.

“My very first flight. I suffered—” a jaw rattling shake, “a bad concussion. Then we crashed.”

“Yes,” the President stared contemplatively at the ceiling less than foot over their heads.

Daniel kept his head ducked down so that he didn’t bang it there as they flew through the next pocket of winter turbulence.

“That was one of Emily’s finer flights.”

And it had been. If the helicopter had been flown by anyone of lesser skill than Major Emily Beale of the Special Operations Aviation Regiment, Daniel knew he’d have been dead rather than merely bruised and battered. Thankfully the Army trained the pilots of the 160th SOAR exceptionally well, even better than the four Marines flying the President’s personal craft. And Major Beale was the best among them, except for perhaps her husband.

The tape of that flight and the much more fateful flight a bare two weeks later had become mandatory training in the Army’s Special Forces helicopter regiment. To this day he knew his life would have ended if he’d been aboard for that second fiery crash. The crash that had taken the First Lady’s life a year ago.

But that didn’t make him like this machine one whit better.

“There’s home.” President Matthews nodded out the window just like any tourist. Any tourist who was allowed to fly over the intensely restricted airspace surrounding the White House.

Daniel managed to look toward the window as the helicopter banked sharply to the left. Please, just let them land safely and get out of this storm. The White House did look terribly cheery. November 30th, she wasn’t sporting her Christmas décor yet, but she was a majestic building, brilliantly lit, perched in the middle of the most heavily guarded park on the planet. Another jolt and he squeezed his eyes shut.

He did manage to force his eyes open as they settled flawlessly onto the lawn with barely the slightest rocking on the shock absorbers.

In moments the door slid open and a pair of Marines stood at sharp attention in their dress uniforms as if the last day of November were a sunny summer day, and not blowing freezing rain at eleven o’clock at night.

Daniel stumbled out and managed to resist the urge to kneel and kiss the ground. For one thing, it would stain the knees of his suit. For another, the President would laugh at him. Okay, he’d laugh even more than he already was.

Both feet on the ground, Daniel found himself. Managed to pull on his Chief-of-Staff cloak so to speak. He grabbed his briefcase and kept his place beside the President as they headed toward the South Entrance. They each carried umbrellas of only marginal usefulness that the Marines had thoughtfully provided. Now that they were on the ground, Daniel didn’t mind the cold rain in his face. It meant he was alive.

“I’d suggest turning in right away, sir. We have an early start tomorrow.”

The President clapped him on the shoulder, “Yes, Mom.”

“Your mother is over in Georgetown.”

“Well, I’m not going to call you ‘dear’ so don’t get your hopes up there.”

Daniel had come to really like the President. Even at the end of a brutally long day, including a flight to Kansas City, then Chicago, and back, he remained upbeat with that indefatigable energy of his. He was easy to like. There’d now be no oil workers’ strike in Kansas City and his Chicago dinner speech had benefited the new governor immensely.

“Just going to drop off this paperwork,” he held up his briefcase.

The President headed for the Grand Staircase and Daniel turned down the white marble hall and headed over to the West Wing.

Somewhere behind them in the dark, the helicopter roared back to life and lifted into the night.