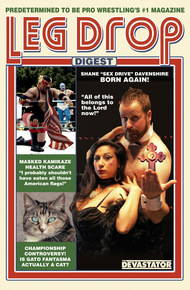 Joe Starr is a comedian and writer for Screen Junkies, Pajiba, and a regular competitor in UCB's Tournament of Nerds.

Asterios Kokkinos is a stand-up comic who's written and performed for FOX, Spike TV, Yahoo! Sports, and The Nerdist.

"A surprising amount of work went into this pitch perfect send-up of pro wrestling, because it was a labor of love for the authors and editors, all fans (marks? smarks?) of 'sports entertainment.' We brought comedians to a real wrestling gym to tangle with a few actual pros in the squared circle, including cruiserweight Brian Kendrick. If you think this zine is too short, think of it this way – at least it isn't three hours long!" – Geoffrey Golden

"I probably shouldn't have eaten all of those American flags."

For years, patriots of the wrestling world have been terrorized by the Masked Kamikaze, whose strength is powered by a love of the Empire of Japan and a burning hatred of all things American. After his recent hospitalization, we caught up with Japan's #1 weapon against the "dishonorable West" at his home in Mobile, Alabama.

"You know how I eat an American ag after I beat every opponent?" asked the Masked Kamikaze, also known as Dale Davis according to his hospital records. "Well, that might not have been a great idea. According to my doctor, eating even one ag is pretty inadvisable. I've eaten two hundred and forty six."

When asked why he had eaten two hundred and forty six American ags, Davis opened a second can of beer, toasted General Robert E. Lee, and con rmed: "I'm just super loyal to the Emperor or whatever, you know man? America sucks and Japan is great. So sometimes you just gotta eat some ags. Now if you'll excuse me, the Auburn/Alabama game is on. Praise the Emperor and Roll Tide!"