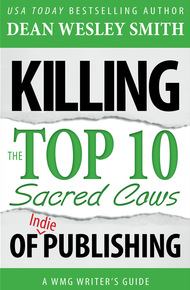 As indie publishing flourishes, many, many myths form around this new booming area of publishing. USA Today bestselling author and major indie blogger Dean Wesley Smith takes a cut at killing some of the myths before they can take root.

From the myth that indie writers can't get books into bookstores (they can) to the idea that indie publishing must be easy (it is and it isn't), Dean knocks ten myths down one after another and might just save you years of wasted time.

Author of the acclaimed Killing the Top Ten Sacred Cows of Publishing, this companion WMG Writer's Guide for indie writers and publishers will become a necessity for your reference shelf.

Kristine Kathryn Rusch and Dean Wesley Smith are like my version of Lewis and Clark in exploring the rugged uncharted wilderness of the publishing world. We began our writing careers at about the same time and have spent decades trying to figure it out, sharing information with each other. I would not have a writing tools bundle without a title from each of them. – Kevin J. Anderson

Both books are about the myths, which I call "Sacred Cows," that infest the publishing industry. I've been writing about these myths, killing one sacred cow after another, on my web site for years now.

Finally, last year, some of the readers convinced me I needed to put the Sacred Cows into a book. So I took what I thought were the top ten myths about publishing in general and created the first book.

So thus this second book.

All the chapters in the two books were blog posts on my website and have some wonderful comments and questions attached. So feel free to go follow the discussions and ask questions.

There is a tab at the top of my website called Killing Sacred Cows that links to all the different chapters in a rougher form.

Why I Can Write About This Stuff

I sold my first short story in 1975, and have been pushing and working at writing ever since. I went through many of the general myths from the first book and survived them and finally started making a living in publishing in 1987, the same year I sold my first novel.

Also that year, Kristine Kathryn Rusch and I started a publishing company called Pulphouse Publishing, which quickly grew to be the fifth largest publisher of science fiction, fantasy, and horror in the nation.

I was the publisher and sometimes editor on some projects.

We shut the business down in 1996, but I kept editing at times, first for a magazine, then for Pocket Books in the Star Trek department. Also, during that time and up until around 2008, I sold over one hundred novels under various names to traditional publishers.

So sitting in the writer desk, the editor desk, and the publisher desk allowed me to see all sides of this business. And working for such a long time writing many, many novels, helped me clear out the last of the myths for myself.

Then the indie revolution started and I loved it right off.

I loved the freedom and the fact that I didn't have to spend so much time dealing with editors and such in New York.

So in 2009, Kris and I once again started up a publishing company called WMG Publishing Inc. to work on our indie titles and get our backlist out.

Now, as I write this in 2014, WMG Publishing Inc. has seven employees and three more coming on in the fall. It has over 400 titles in print and is publishing not only Kris's work and my work, but work by a lot of other writers as well.

So I know the indie side as well as the traditional side.

And both Kris and I have been voices in the indie growth on our blogs since it started.

The Goal of This Book

Writers hold onto myths like lifelines that are keeping them from drowning in a raging river of information. Sometimes sane people in the normal world will follow a publishing myth that makes no sense at all.

And they follow the myth, the sacred cow, without thought.

So this new series is an attempt to help the new world of indie publishing with the growing list of myths that plague it.

My goal is simply to show other sides of myths, to help writers become grounded in good business decisions.

This indie publishing business can be fantastic fun and very profitable if you can make clear business decisions that are right for you.

My goal is to not show you the right way, or the only way, or any other such nonsense.

My goal is to help you push aside the myths that are swirling around publishing and make good decisions for yourself.

Thanks for reading. I hope this book helps your writing and publishing dreams in some fashion or another.