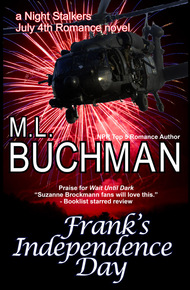 Agent “Beat” Belfour comes under fire when trapped on the wrong side of a coup in the West African country of Guinea-Bissau. A routine diplomatic assignment shifts to place the Ambassador’s life in her hands.

Frank Adams’ only weapons to save her are: the President’s strategic skills, the dedication of the U.S. Army Night Stalkers helicopter regiment, and a past history with “Beat” that changed his life and his heart.

Frank Adams had his boys slide up around the metallic-blue late-model BMW at the stop light on Amsterdam Ave. One stood by the passenger door, one ahead, one behind, and he took the driver’s window himself as usual.

It was only the third time they’d done this, but Frank saw, without really watching, that they made it look smooth. They’d split the thousand that the chop shop had just paid for the Ford they’d jacked and two grand for the Camry. But a new Beemer? That was a serious score. What they were doing so far uptown this late on a hot, New York night was the driver’s own damn fault.

He started it like any standard windshield scam. Spray the windshield to blind the driver, then shake them down for five bucks to clean it so they can see to drive away. The bright bite of ammonia almost reassuring to New Yorkers who had come to expect the scam. He’d long since learned to flick the windshield wiper up so that the driver couldn’t just clean their own damn window. It was when the driver’s window rolled down, and the person at the wheel started griping, that the real action would begin.

A glance to the sides showed not much traffic. Lot of folks gone down by the water to watch the fireworks, or off with family for July 4th picnics at the park, or on their fire escapes in the sweltering summer heat. The acrid sting of burnt cordite hung like a haze over the city from a million firecrackers, bottle rockets, M-80s, cherry bombs, and everything else legal or not. Hell, Chinatown would be sounding like they were tossing around sticks of dynamite.

Night had settled on the roads out of Columbia University and into his end of Manhattan, and as much darkness as could ever be happening beneath the New York City lights had done gone and happened.

Frank’s boys were doing good. At the front and back, they’d leaned casually on the hood and trunk of the car not facing the prize, but instead watching lookout up and down the length of Amsterdam Ave. They’d shout if any cops surfaced.

And no self-respecting BMW driver would run over someone they didn’t know just to get away, especially ones who weren’t even looking at them threateningly.

Other drivers were accelerating sharply and running the red light just so they weren’t a part of whatever was going down at the corner of Amsterdam and midnight.

Three minutes. That meant they had about three minutes until someone nerved down enough to find a pay phone and call the cops and he and his boys had to be gone.

They’d only need about one.

The Beemer jerked back about two feet with little more than a hiss and a throb from that smooth, cool engine.

His boys were on the pavement before Frank could even blink.

Japs had been sitting on the trunk but was now sprawled on his face and Hale sat abruptly on his butt when the car’s hood pulled out from underneath him. It was almost funny, the two of them looked so damn surprised.

Then he was facing the rolled down window, just as he’d planned. He could taste the new-car fine-leather smell as it wafted out.

What he hadn’t planned was to be staring right down the barrel of a .357. Abruptly, all he could taste was the metal sting of adrenaline and the stink of his own sweat.

He’d seen enough guns to know that the Smith & Wesson 66 was not some normal bad-ass revolver.

He was facing death right between the eyes.

His body froze so hard he didn’t even drop the knife nestled out of sight in his palm.

The woman who looked at him, right hand aiming the gun across her body, left hand still on the wheel, had the blackest eyes he’d ever seen. So dark that no light came back from them, like looking down twin barrels of death even more dangerous than the gun’s.

A cop siren sounded in the distance, but his boys were already on the move out of there.

“They’re leaving you behind.”

Her voice was as smooth as her weapon. Calm, not all nervy like someone surprised by a carjacking or unfamiliar with the weapon she held rock steady.

He shrugged a yes.

That siren was getting louder and it was starting to worry him. But even doing a drop and run, well… He was fast, but not faster than a .357. He stayed put. Classy lady in a Beemer and a dead carjacker, she wasn’t risking any real trouble if she gunned him down where he stood.

“Decision point. Go down for it. Spend some time in juvie—”

“I’m twenty, twenty-one next week.” Why’d he been dumb enough to say that? Not that the cops wouldn’t find out, but they didn’t have his prints anywhere in their system… yet. He didn’t carry any ID either, but there was only so long you could play that card.

He looked into the deep well of those dark eyes, allowing himself three heartbeats to decide what the hell she was up to. The sharp squeal of cop tires swerving around some other car too few blocks away won the argument.

Frank moved around the front of the car fast, flicking down the wiper blade as he went, and slid into her passenger seat.

While he circled, she’d shifted the big gun into her left hand. Could shoot with either hand, that took training. Some off duty cop in a Beemer, just his luck.

He was barely in the car when the fuzz rounded the corner, their lights going.

It was only after he buckled in that another thought struck him. A bad one. She just might drive him somewhere, gun him down, and dump his body. Never knew with cops in this town. Then she wouldn’t even have to fill out any damn paperwork. Little bit late to think of that shit, Adams. Dumbass! Once around the passenger side, he should have just kept running, not climbed into the lady’s damn car like a whatever it was that went to the slaughter. Sheep? Calves? Something. Frank Adamses.

She slid the gun under the flap of her leather vest so that it was out of sight, but still aimed at him across her body. She ran the windshield wiper and together they watched the blue-and-white roll up fast. The cops pulled up driver to driver, facing the wrong way on the street to do so.

Frank had the distinct impression that even though the woman was reassuring the cop, if Frank so much as flinched, there’d be a big, bad hole in his chest and that the thing that would really tick her off was the damage to her German-engineered car door where the bullet would punch a good-sized hole after making a real mess of his body on its way through. It took her long enough to talk the cop down that Frank had time to register how the car’s seat fit to his body. It was way more comfortable than any chair or sofa he’d ever slouched in. Damn seat alone probably cost more than everything he owned.

Finally satisfied, only after blinding Frank with a big flashlight a couple of times, the cops rolled away real slow. He’d purposely dressed okay in his best jeans and a loose button-down shirt he’d worn to Levon’s courtroom wedding. That way he wasn’t too scary for the windshield-washing scam to work. It paid off now, he didn’t look too out of place in this classy car. He eyed the woman carefully, as classy looking as her vehicle. Or even more.

She pulled her hand out from under her vest of dark leather even finer than the seat upholstery, leaving the gun behind, and rolled up the window. Shoulder holster. He’d tried to carjack a woman who wore a .357 in a shoulder holster. What were the chances of that kind of bad luck? Well, one in three. Third carjacking ever, woman with large gun. Not exactly high-level math.

Though he’d never heard of anything like it on the street. He’d been told to watch for crazies, diving for glove compartments and purses, so full of nerves that they were more danger to themselves than anyone else. Best advice on those had been to run. Toward the back of the car. Make yourself a hard shot when they’re all buckled in and facing forward. They’d be undertrained, have lousy aim, and probably wouldn’t shoot if they thought they’d won. That’s if they could find the damn safety.

Not this lady. Cool and calm.

He’d bet she could execute his ass without havin’ a bad night’s sleep.

“Let’s go somewhere and talk.” With the window up, the air-con dropped the temperature about twenty degrees from the July heat blast going on out in the real world which was sweet, but left a chill up his spine that started right where his butt was planted in the fine leather seat.

She punched the gas and popped the clutch, in seconds they were hurtling downtown on Amsterdam and Frank knew he better hang on for dear life.