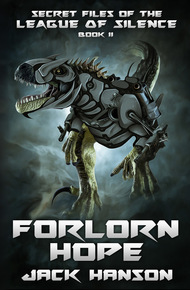 Louder than God's revolver and twice as shiny, Jack Hanson was once told to "write what he knows". After two wars in Afghanistan and Iraq as a paratrooper, he figured he knew a thing or two about what combat was like. He enjoys boxing, firearms, and wearing t shirts in boys' size small. Someone once told him there were rules about not posting bathroom selfies on your Amazon author page, but he didn't care about those rules cause he was too busy making his own and looking jacked!

After the Battle of Ganymede, a vengeful Illurian Dominion is held in check only by the newest Imperial heroes, the psychic super soldiers known as FOSsils. Yet their utility is as much curse as blessing, and they find themselves treated as tools, albeit useful ones.

Jane struggles with battling a faceless bureaucracy in order to preserve her team, while Paris challenges for his position as a member of the Schismatic Khajali. Salem's former identity is blasted away even as she is drawn into Imperial subterfuge from before her birth. Sand attempts to resolve how his killer's instinct affects him emotionally even as he is lauded as a hero for the slaughter in his wake.

Into this storm, their mentor Clay fights to keep history from repeating itself. The machinations of those who hate the FOSsils in the Terran Empire are nothing compared to the vengeance desired by his old comrades: the FOSsil Remnants. The old soldier has weighed the options before him and decides to spend his life eliminating the threat of his one-time friends once and for all.

Against this backdrop, the war becomes vividly personal for the Third Generation, as their families become targets, bringing it home to them and making the Dominion an enemy in the most visceral of ways. Yet they will have allies in the battles they face. The Scytheclaws answer their call, fighting alongside the FOSsils as bonded companions once more.

From the depths of space, one of humanity's fiercest friends and the Empire's terrible foe returns from forgotten history – a rogue force summoned by the Last Reaver, bringing steel and fire, as well as a legacy even the Federation learned to fear.

As the galaxy turns in its feverish dreams of conflict, the only question that remains is if the Third Generation can succeed against all odds, or if it is all a forlorn hope.

The adventure continues, with more bio-engineered dinosaurs enter the fray alongside the most powerful warriors to grace the universe to date. – Cohesion Press

The rumble of engines made everyone look up, and they could see a transport craft descending. It looked like a standard issue shuttle, with wide, variable-sweep wings on a frame that resembled a rounded triangle and loading ramps fore and aft. As it got closer, the group saw that the details were what separated it from what they knew.

The two tone dark-gray on top/light-gray on bottom they had grown up knowing had been replaced by jagged red and black tiger stripe, with the exception of one area on either side of the front loading ramp, which had been painted to resemble a mouth full of jagged teeth. On that ramp, a Naith skeleton had been welded to the ship, its two thighbones, split ribcage, and oblong head making it instantly recognizable.

"Do you smell that?" asked Ripper, and the rest of the Old Bloods nodded after a moment. The FOSsils saw the source of the smell before it hit their noses: two bodies had been strapped to the wings, and even with the protection of the re-entry shield they had been turned into charred corpses, nearly fused to the craft. Smoke still rose from them as the shuttle adjusted its wings and slowly settled to the ground a few hundred yards away from the group.

The forward landing ramp lowered, and armed troops poured out, the only noise their boots against the metal ramp. First off came a surprise: members of the Harvester cult in full armor, waving a smoking censer and holding up a skull totem on a stick, brightly colored feathers blooming from behind it while bone charms clinked against each other. Following them, soldiers began to disembark.

Again, janissary gray was subverted for black and red, and not all the troops were human. Illurian blue was common, and the Bhae Chaw in the group were obvious, the ursine humanoids towering above their smaller comrades.

The FOSsils had not reached for weapons, even as the troops in front of them formed up with rifles that they assumed were loaded. There was no malice radiating off them, no emotional preparation for an attack that any of them could detect. Instead the only emotion they could read was anticipation. However as the final two occupants of the shuttle disembarked and fell into formation, hands twitched toward dreamblades and the Scytheclaws growled low in their throat.

Two Leitani walkers stepped out into the sunlight, their anti-gravity suits bearing the same black and red motif as the others, and like the other soldiers they ignored the FOSsils and Old Bloods while waiting silently. Each Leitani stood behind two square formations of soldiers, while a five-man color guard stood in front and between the two elements, bearing a familiar flag: Clay's red tear drop, which began to flap in the breeze. It showed the marks of the battles it had been in, with the gilt fringe scorched and smoke having stained the lettering, but it was obviously revered, with campaign streamers turning in the wind.

Kio'mal turned to look at Ripper and Brokehorn. "So, what other deals did Clay make when he brought fire and death to the Naith in order to have allies such as those?" the Scytheclaw asked.

There was reproach in Kio'mal's question, and Ripper took his time turning his great head to look at the smaller Old Blood.

"He did what he had to do to win. Do not question what you do not understand," he warned.