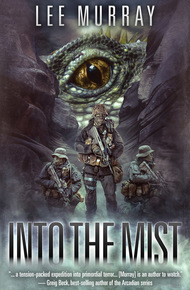 Lee Murray writes fiction for adults and children, for which she has been lucky enough to win some literary prizes. Her novels include A Dash of Reality, Battle of the Birds, and Misplaced. Into the Mist is her first military horror novel, and is heavily reviewed and selling well. Lee lives with her family in New Zealand.

Into the Mist by Lee Murray

When NZDF Sergeant Taine McKenna and his squad are tasked with escorting a bunch of civilian contractors into Te Urewera National Park, it seems a strange job for the army. Militant T hoe separatists are active in the area, and with its cloying mist and steep ravines, the forest is a treacherous place in winter. Yet nothing has prepared Taine for the true danger that awaits them. Death incarnate. They backtrack toward civilisation, stalked by a prehistoric creature intent on picking them off one by one. With their weapons ineffective, the babysitting job has become a race for survival. Desperate to bring his charges out alive, Taine draws on ancient tribal wisdom. Will it be enough to stop the nightmare? And when the mist clears, will anyone be left?

I had to include this, the best-selling release from Cohesion Press to date. Take a group of scientists, add some special forces, then throw into the wilderness with a giant man-eating lizard. A mix made in reader's heaven. – Cohesion Press

Terry woke, aware the space beside him was empty. Fumbling with his watch, he checked the time: 12:23am. Cam must've gone for a leak. Terry heard him stomping around outside the tent. Geez, Cam, how hard is it to find a spot to piss? Lifting himself up on one elbow, Terry gave his pillow – a bag of dirty clothes – a good whump, encouraging it into a more comfortable shape, then shifted his hips to avoid whatever'd been digging into him through the groundsheet. That done, he burrowed into his sleeping bag, pulling the fabric close to his chin. He was almost back in the land of Nod when Cam's yell filled the night.

"Jesus, Cam!" Terry scrambled free of his sleeping bag and charged out of the tent. He pulled up. Outside, the campsite was a patchwork of shadows, the fire long since extinguished.

Nothing. Miles from civilisation, the silence was eerie, as if the forest itself was holding its breath.

"Cam," Terry said. "Quit fooling around, will ya? You're freaking me out."

The air was strangely heavy. At the base of his neck, Terry's skin prickled.

"Cam, you okay mate?" he said, reaching backwards under the flysheet for his boots. He strained his ears, just catching a faint rustle. Not bothering to do up the laces, he slipped his boots on, wincing when the blister touched home. Then, he crossed the campsite in the direction of the noise. He felt his way with caution, checking the stability of the ground before placing his feet. Cam had been making a bit of a racket earlier, stomping around out here. Could he have tripped on a hidden hollow and knocked himself out? Or maybe he'd wandered away from the campsite and couldn't find his way back? Except if that were the case, he would've called out. Terry figured Cam must've hurt himself. What possessed Cam to go off on a Tiki-tour in the dark? Not everything had to be a frickin' cross-country adventure. Why couldn't he just piss into the bushes behind the tent? Terry bashed his knee on a rock.

Hang on. Another sound. Possibly a whimper...

"Cam? Can you hear me?" Terry stopped still, listened for his mate and pushed back the panic that'd gripped his intestines. Dead silence. Cam must be out cold. Terry hoped it wasn't too serious. He increased his pace, trying to navigate his way in the murk, but his thoughts were way ahead. How were they going to get out of the bush if Cam was injured? Nothing else for it, they'd just have to pull their heads in and phone Search and Rescue. That was if they could get a signal. And even if they got through to someone, Terry didn't have a clue where they were. The forest park covered more than two thousand square kilometres. It could take days for anyone to get to them.

Terry shook his head, annoyed his imagination had run away with him. First thing he needed to do was find Cam. As far as getting him out of the bush, they'd deal with that later.

At the edge of the campsite, Terry stumbled on a fallen tree limb, bruising his shin and sprawling headfirst into some spongy bracken. Stunned and gormless, Terry picked himself up, casting around in the dark for the obstacle so as not to trip a second time. His fingers found a boot. Terry felt a rush of relief. Looked like Cam tripped over the same branch.

Cam didn't answer, confirming Terry's suspicions. The duffer'd gone and knocked himself out on a rock or a stump or something. Concussed. Patting his way up Cam's legs to his trunk, Terry was pleased to note that at least there were no broken bones.

Terry shook violently, his body already grasping what his mind hadn't yet understood. Bringing his fingers to his face Terry sniffed at the wetness there. Metallic. It wasn't dew. Terry jerked his hands away in horror. Cam's upper body was missing.

He'd been severed in half. Gulping air, Terry scrambled to his feet, backpedalling, using bloody hands to scrabble away, a low wail welling up from his stomach. How did this happen? He wasn't stopping to find out. He had to get the hell away from here. Turning his back on what was left of Cam, Terry charged toward the tent, plunging headlong through the dark, ignoring the branches that stabbed at his face and arms. He was half way across the clearing when the moon peeked through the forest canopy illuminating the campsite, and Terry knew getting out of the bush was the least of his worries.