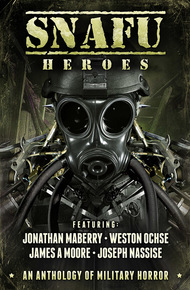 Jonathan Maberry is a "New York Times" bestselling author, multiple Bram Stoker Award winner, and Marvel Comics writer. He s the author of many novels, including "Assassin s Code", "Dead of Night", "Patient Zero", and "Rot & Ruin". His nonfiction books cover topics ranging from martial arts to zombie pop-culture. Jonathan continues to teach the celebrated Experimental Writing for Teens class, which he created. He founded the Writers Coffeehouse and cofounded The Liars Club, and he is a frequent speaker at schools and libraries, as well as a keynote speaker and guest of honor at major writers and genre conferences. Jonathan lives in Del Mar, California, with his wife, Sara, and their son, Sam. Visit him at JonathanMaberry.com and on Twitter (@JonathanMaberry) and Facebook.

WESTON OCHSE (pronounced oaks) has won the Bram Stoker Award and been nominated for the Pushcart Prize. In addition to his previous SEAL Team 666 novels, his work has appeared in comic books and magazines such as "Cemetery Dance" and "Soldier of Fortune". He is a retired U.S. Army intelligence officer and current intelligence officer for the Defense Intelligence Agency. He lives in Arizona within shouting distance of the International Border.

A supplemental volume to SNAFU, this book contains short stories and novellas from four of the best military horror writers in the field.

Heroes takes some well-known protagonists and throws them into the mix, with Jonathan Maberry and others giving us their very best tales for the second SNAFU anthology. It really does show just how great this genre can get. – Cohesion Press

Return to the widely popular SNAFU series with this set of mission-oriented novellas featuring renowned heroes!

For example, in The Hungry Dark by Joseph Nassise, Knight Commander Cade Williams and his team are in Europe, helping train a new group of recruits when reports of strange occurrences at a small village deep in Germany's Black Forest reach the Order's leaders. With the locals tied up on other matters, Echo Team is dispatched to deal with the situation.

No sooner do the men of Echo reach their destination that a terrible winter storm rolls in, stranding them in enemy territory with nothing but their wits and a handful of weapons to get them through the night.