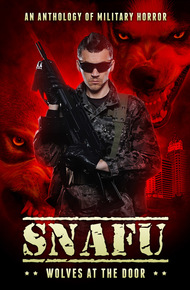 James A. Moore is the award winning author of over twenty novels, thrillers, dark fantasy and horror alike, including the critically acclaimed Fireworks, Under The Overtree, Blood Red, the Serenity Falls trilogy (featuring his recurring anti-hero, Jonathan Crowley) and his most recent novels, Blind Shdows, Homestead and the soon to be released Seven Forges. He has also recently ventured into the realm of Young Adult novels, with his new series Subject Seven. In addition to writing multiple short stories, he has also edited, with Christopher Golden and Tim Lebbon, the British Invasion anthology for Cemetery Dance Publications.

Copywriter by day, horror writer by night and surfer at the weekend, Kirsten Cross is based on the wilds of Exmoor and is surprisingly good natured for a horror writer. She is a serial contributor to the SNAFU military horror series, as well as the 2015 Steampunk tome 'Steamworld'. In between writing web content, getting battered by the Atlantic and practicing martial arts, she is currently exploring the wonders of Steampunk comedy and military vampire stories.

Steve Coate holds a bachelor's degree in communications from Florida International University and has worked at two major metropolitan newspapers in South Florida. He was an English major prior to switching tracks to journalism and has also worked in sales (both door to door and telemarketing), catering, and the dry cleaning industry, providing plenty of material for the speculative fiction he writes. He lives in Lauderhill, Florida, with his cat, Bigby. Steve's short fiction appears in Third Flatiron Anthologies, "Coven: Tales of Masterful Fantasy," and "The Literary Hatchet," among other publications. For a full bibliography, visit his blog at coaterack.blogspot.com. When not writing speculative fiction, Steve works as a copy editor at the Sun Sentinel in Fort Lauderdale.

SNAFU - Wolves at the Door by James A. Moore, Steve Coate and more

SNAFU: Wolves at the Door will bring the bite, with soldiers fighting for their lives against were-animals.

In the blackest night or under the full moon, danger is lurking. It's survival at all costs when you're fighting against an enemy that could tear you apart – or convert you to the other side. Against the backdrop of an untamed wilderness or the dark depths of the city, the ultimate clash between the forces of man and nature rages on. Whether battling the monster within or a war around them – these soldiers may find the cost could prove too great.

A more focused SNAFU than usual, with lycanthropes and shape-shifters giving these soldiers a real run for their money. Wolves took the wolves and other were-animals and forced them to fight for their lives. – Cohesion Press

Taking down the Top Cat

Night fell in the jungle: greens sinking into blacks, shadows growing up from the valley floor like a dark liquid pooling in the deep places of the world.

Sergeant Jared Naylor scanned the compound through his binoculars as he waited for the rest of the team to make their way up the narrow game trail. From above it looked like a holiday resort. The main house nestled into the wooded hillside, its sprawling size artfully hidden by sculpted gardens that led down to the river. A helipad and boathouse on the river completed the picture. It looked more like an eco-retreat for detoxing celebrities than a drug lord's stronghold.

"Man, I am in the wrong business," said Garcia. He gave out a low whistle as he stared down at the luxurious compound.

"Well today's your lucky day, Private," Naylor said. "I hear there are going to be a few vacancies opening up in his operation pretty soon."

Germaine McDowell lumbered past, toting the heavy MG4 as if it was a kid's BB gun. "Of course that would mean you'd have the mighty fightin' Delta Force bearing down on your ass right now," he said.

Garcia shrugged. "I heard they ain't so tough."

Mac gave him a friendly shoulder check as he walked past. "Some of them ain't," he said.

"Zip it," Naylor said. "Save the bull session for the ride home. I want it tight and quiet from here on in."

He checked his watch; they were right on time. Not bad after a ten-mile hike through dense jungle. This hadn't been a usual infiltration. Their target was Hernando Ramirez, head of the infamous Cascajal drug cartel. Ramirez was notoriously paranoid, and his compound was miles away from any road and well off any commercial flight path. They couldn't afford to give him any warning, so they had been dropped two valleys away with the rest of the journey being made on foot. Other squads were hiking in from the south, and under Emcon Alpha, full radio silence, timing was everything.

"I see it," Naylor replied.

The boathouse was their way out. Getting away from the compound had to be as fast as their approach was stealthy. This operation was strictly off the books. The chain of command went from Naylor to his Captain straight to the commander of Delta and then to a D.C. suit. Naylor had been working operations like this for years but still got nervous when he thought about who was ultimately in charge. A Mexican drug lord might kill you, might even torture you first. But those Beltway cats would sign your death warrant with no more thought than swatting a fly if they thought it was in their interests. They couldn't afford to get caught in Mexico. If they did, the unofficial war on drugs could become an international incident.

Fortunately Ramirez's lavish lifestyle extended to a collection of motorboats in his private boathouse. That was Naylor's objective: hold and secure their way out while the other squads took out Ramirez and his key lieutenants.

They made their way down the hill. If anything the undergrowth was even thicker on the south-facing slope and they were forced to hack their way through the bush.

Naylor swung his machete against a particularly tangled knot of vines when the blade struck something hard. He pulled the vines and they came away like a living tapestry, an interwoven blanket of tough, woody tendrils. Behind was a huge boulder of yellowish green rock just like the outcroppings they had seen during their hike. But this wasn't just some slab of bedrock protruding through the topsoil, it was a huge stone head.

"Listen to him," Mac said. "Just 'cus his gran'pappy swam the Rio Grande forty years ago, he thinks he's some kind of expert on Mexican history."

Naylor examined the huge artefact. The features had been smoothed by time but Naylor could still make out the broad, fang-filled mouth of the Olmec jaguar God.

"Well in this case, I think he's right," he said. "This is Olmec country, and they liked their carvings sure enough. I even saw one like this in a museum in Guadalajara one time."

"You know, I heard Ramirez was into all this shit," Lowe said. "Collects artefacts, even makes out like he's some kind of champion for the native Olmec Indians."

"Yeah, I heard something similar," Naylor said. "Seems like being a drug lord with more money than God isn't enough for him. Ramirez likes to pretend he's some kind of mystical badass, Lucifer and Sante Muertacombined. I guess it helps to keep the locals in line: stops the coca farmers from selling the crop to the other cartels. It's all bullshit designed to keep the locals away from his pleasure palace."

"Pleasure palace," Garcia repeated. "I like the sound of that. Like I said, I'm in the wrong business." He patted the giant stone head as they walked past. "I'm going to tell Ramirez about this, he might want to add it to his collection."