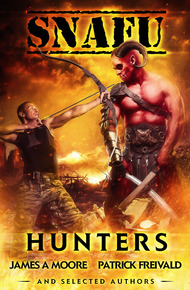 James A. Moore is the award winning author of over twenty novels, thrillers, dark fantasy and horror alike, including the critically acclaimed Fireworks, Under The Overtree, Blood Red, the Serenity Falls trilogy (featuring his recurring anti-hero, Jonathan Crowley) and his most recent novels, Blind Shdows, Homestead and the soon to be released Seven Forges. He has also recently ventured into the realm of Young Adult novels, with his new series Subject Seven. In addition to writing multiple short stories, he has also edited, with Christopher Golden and Tim Lebbon, the British Invasion anthology for Cemetery Dance Publications.

Patrick Freivald is a four-time Bram Stoker Award nominee, a teacher (physics, robotics, American Sign Language), beekeeper, and author, and coach of an award-winning competition robotics team for high school students. He lives in Western New York with his loving wife, birds, dogs, cats, and several million stinging insects. You can find him at http://patrick.freivald.com

Raised in the swamps and pine forests of East Texas, Seth Skorkowsky gravitated to the darker sides of fantasy, preferring horror and pulp heroes over knights in shining armor. His debut novel, DÄMOREN, was published in 2014 as book #1 in the Valducan series; it was followed by HOUNACIER in 2015, and the third book, IBENUS, in 2016. Seth has also released two sword-and-sorcery rogue collections with his Tales of the Black Raven series. When not writing, Seth enjoys cheesy movies, tabletop role-playing games, and traveling the world with his wife.

Tim Marquitz is the author of the Demon Squad series, the Blood War Trilogy, co-author of the Dead West series, as well as several standalone books, and numerous anthology appearances including Triumph Over Tragedy, Corrupts Absolutely?, That Hoodoo Voodoo that You Do, Widowmakers, At Hell's Gates 1&3, Neverland's Library, Blackguards, and the forthcoming SNAFU Survival of the Fittest (Cohesion Press), In the Shadow of the Towers (Night Shade), and Unbound (Grim Oak Press). Tim also collaborated on Memoirs of a MACHINE, the story of MMA pioneer John Machine Lober. Tim is also the co-owner and Editor in Chief of Ragnarok Publications. His website can be found at www.tmarquitz.com

From the darkness of the abyss to the subtle shift of shadows dwell creatures that prey on us all. Be they straight-up monsters or nightmares behind a human mask, they track us and they kill us. Sometimes, they play with their food, where death would be a kindness. But there is hope. There are those who search out the monsters, those who hunt the hunters. These are their stories.

The SNAFU continues with hunters, where predator and prey give us a thrill-ride. Some of the best and most riveting tales yet for this stand-out series. – Cohesion Press

"Taints are, without doubt, the biggest threat facing us today. As a result of our ignorance, our arrogance and our misguided sense of scientific endeavour, we have created a serious threat to the safety and security of this country, and its people. This committee therefore recommends the immediate formation of a specialist Unit made up of elite members of Her Majesty's Armed Forces with the expressed duty of combating this threat above all else. We also recommend that the Unit include experts in the field of science, military tactics, and Vampirism.

And may God help us all."

The trouble with night vision goggles is that the slightest flash of any bright light and you're effectively 'blasted out'. And when you've got some dirty little bastard Taint intent on chowing down on any soft tissue it can find about three feet from your arse then being blind, even for a split second, is not an option.

"Jesus, Mary, Joseph and all the little saints, these sons of bitches are fast!" Robbie Moore, trying to find his bearings in the eerie green glow of a room seen through NVGs, aimed the adapted M4 Benelli pump action shotgun straight at the snarling face of the Taint. He fired. And missed. "Fuck!"

"Seriously? From six feet away? Who taught you to shoot, your grandmother?" Terry Warner screamed abuse at his oppo and fumbled with his own M4. As inanimate objects are wont to do at the most inopportune moment, the damn thing stubbornly refused to co-operate. "Shit! Shit!"

"Okay, ladies. We all knew this was coming. Breathe. Rob, stop panicking. Safety off, Terry. Prime. Squeeze the damn trigger, don't yank on it. You're shooting a Taint, not giving yourself a hand job." The calm voice of Colby Flynn cut through the screaming and mayhem. He wanted the newbies to get their first kill for themselves this time, rather than having to step in for them yet again. And preferably before the rest of the pack of slathering, wild-eyed Taints came barrelling through the door and tore them all to pieces, if you don't mind lads, thank you very much.

An M4 blasted out a cartridge filled with liquid, spraying a fluorescent pale green mist into the air, like someone had shaken a can of soda and pulled the tab. Colby checked the two men. It was Robbie Moore who had finally got his shit together and managed to fire off a second shot. "Adda boy." He melted back into the corner of the room and watched how the two men handled a close quarters confrontation with one of mankind's most terrifying creations, a second generation Taint with an appetite and an attitude. After the initial god-awful fumbling and general fuck-uppery, the two men started to get themselves organised. Their training - if it was ever truly possible to 'train' for your first full-on Taint attack – finally kicked in.