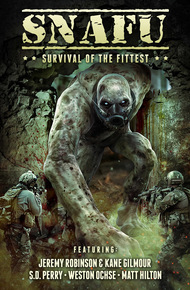 JEREMY ROBINSON is the international bestselling author of fifty novels and novellas including MIRRORWORLD, XOM-B, ISLAND 731, SECONDWORLD, RAGNAROK, PROJECT NEMESIS, THE ANTARKTOS SAGA and the exciting Jack Sigler thriller series. His novel PROJECT NEMESIS, is currently being adapted as a comic book series, and his Jack Sigler thrillers were recently optioned for film. Robinson is also known as the #1 Horror writer, Jeremy Bishop, and the master of post-apocalyptic fiction, Jeremiah Knight. His novels have been translated into twelve languages. He lives in New Hampshire with his wife and three children.

Kane Gilmour is the #1 Amazon Science Fiction and Action/Adventure bestselling co-author with thriller author Jeremy Robinson of RAGNAROK, the fourth novel in the Jack Sigler/Chess Team series. He is also the author of RESURRECT, CALLSIGN: DEEP BLUE, and THE CRYPT OF DRACULA.

In addition to his work in novels, Kane works with artist and creator Scott P. Vaughn on the sci-fi noir webcomic, Warbirds of Mars.

He lives with his family in Vermont. Follow him at kanegilmour.com

SNAFU - Survival of the Fittest by Jeremy Robinson, Kane Gilmour and more

Survival horror says it all.

Straining to make that one clip of rounds last. Making sure not to waste a single bullet.

Lost in the shadows, low on ammo; only edged weapons; wounded, fighting to survive, the last remnants of the mission team trying to make sense of where they had gone wrong, and how to make it out alive with next-to-no resources.

Survival horror, where every bullet counts.

– S.D. Perry (has written extensively in the universes of Star Trek, Aliens, and Resident Evil, among others)

Plus another six established and emerging writers.

Survival horror was the theme for this release, with authors like NY Times-bestselling Robinson, and SD Perry, who has written some of the best Alien/Predator/Resident Evil tie-ins published to date. – Cohesion Press

"Show of force operations are designed to demonstrate resolve.
They involve the appearance of a credible military force in an attempt to defuse a situation."
—Joint Publication 3-0, Joint Operations

The helicopter set down a half mile from the raging storm, which made the desert look as if it were being sucked up into space. A twisting cloud of dust, sand, dirt and snow spiraled into the sky and covered a region that stretched for miles, engulfing most of the so called 'Great Gobi B Strictly Protected Area.' Six bodies slipped from the rotary-winged vehicle and began a fast march toward the howling blizzard.

The region had been set aside as an International Biosphere Reserve in 1991, but in practice, that just meant there was very little there. Mongolia had agreed to the classification of the rarely-used land in exchange for developmental aid. Stretching over 3000 square miles, the place was a combination of drab-colored desert steppe and low, craggy, arid mountains.

The paramilitary team arrived at the leading edge of the storm, and was swallowed by the blinding whiteout conditions. Bursts of sand and ice particles, propelled to 100 mph by roiling winds, blasted across the landscape in thick, nearly solid slabs, buffeting their bodies. Unwavering, the soldiers pressed on. The radio earpieces and speakers inside their helmets, hidden beneath hoods, blocked external audio unless they were switched on. Without that block, they wouldn't have been able to hear each other over the mechanical, high pitched whine of the rampaging weather.

When the gusts of the storm periodically cleared, they could see each other in their full-body, white environment suits, trudging across the patchy scrub-grass-coated ground. The suits looked like the bastard children of environmental hazmat suits and yetis. With full-plate face masks, and tight, fur-coated hoods, they might have easily been mistaken for small polar bears missing their snouts – polar bears with plastic-coated automatic weaponry. The synthetic fur on the exterior of the suits repelled the sand and snow. Each member of the team also wore a tactical climbing harness that covered chest and pelvis, which could be used for rappelling or climbing, but more often was used for attaching equipment to the body. Underneath the outer suits they wore gel-heated full-body wetsuits to help maintain a comfortable internal body temperature.

Outside the environment suits, the mercury would be hovering around -40 degrees Fahrenheit, without the windchill. Scrubbing filters could provide exterior air if their self-contained tanks ran out, but they anticipated being on the ground for less than twenty minutes.

The land was barren rock and jutting hardy grasses – until unexpectedly, it wasn't. The hard ground gave way to treacherous sand dunes, and then just as seamlessly merged back into more crumbly rock and clumps of pale green vegetation.

"Charming. Like New Hampshire in the spring," one of them said, breaking the silence on their internal comms.

"Nah," the burly man in the lead said. "Spring is mud season. It would be like this, but we'd be caked in mud, too."

The slightest of the group groaned and said, "Golf alpha romeo." It was shorthand for 'get a room.' It was a common thing for the man and woman to bicker while in the field, but the other team members all knew how they really felt about each other.

"Hold up here," the slim man in the rear said. He squatted, and the others paused in their march without protest, dropping into similar crouches. They all held specially-designed, plastic-coated FN SCAR rifles, capable of withstanding the grit from extreme sandstorms. Even the weapons' muzzles were covered in a thin layer of plastic that would be ripped away once they opened fire, should it come to that. But they expected it wouldn't. This mission would be a cakewalk compared to what they normally faced.

The slight man, carrying a simple M-21 sniper rifle, also wrapped in white plastic, approached the thin man who had called a halt. He squatted and brought his weapon up in the direction his leader was looking, straight into the thick maelstrom. "King, you see something?"

The team's leader, King, stayed motionless for another full minute, before he replied. "No, Knight. Sorry. Just getting used to the complete lack of visibility and exterior sound. We don't know what's out here, so everyone stay sharp." Jack Sigler, callsign: King, stood up and headed out, into the howling storm.