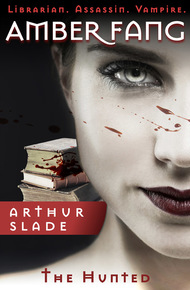 Arthur Slade was raised on a ranch in the Cypress Hills of Saskatchewan. He is the author of nineteen novels including The Hunchback Assignments, Flickers and Dust, winner of the Governor General's Award. He lives in Saskatoon, Canada. Visit him online at www.arthurslade.com.

Amber Fang enjoys life's simple pleasures - a good book, a glass of wine and, of course, a great meal.

Raised to eat ethically, Amber dines only on delicious, cold-blooded killers. But being sure they're actually killers takes time… research… patience.

It's a good thing Amber's a librarian. Her extraordinary skills help her hunt down her prey, seek out other vampires, and stay on the trail of her mother, missing now for two years. One day she stalks a rather tasty-looking murderer and things get messy. Very messy. Amber, the hunter, becomes the hunted.

And then, from out of nowhere, the perfect job offer: Assassin. She'd be paid to eat the world's worst butchers. How ideal.

Amber Fang is the first book in a new action and adventure vampire series by bestselling author Arthur Slade.

Living in the same small city and working in the same genres, Art and I have been colleagues and friends for a number of years. In fact, it was his practice of writing on his treadmill that first inspired me to add one to my own work, but I had to find a way to be different, and thus the IOD Report was born. Unfortunately, since Art usually works with traditional publishers, his books never qualified for my challenge. To my great delight however, he's recently started experimenting with the indie movement, which finally gave me the chance to throw him down and show him the soles of my shoes. And what do you know? He survived! Amber Fang is a smart and funny vampire librarian with a strict ethical code: she only eats murderers. And that, combined with her super-powered vampire physiology, makes her the perfect candidate for an entirely different job: government assassin. Nobody ever suspects the librarian. – Jefferson Smith

My mother always told me never to fall in love with my food.

There was no chance of that today. Jordan Rex was not someone I—nor anyone with half an IQ point—would ever fall in love with. He was food, though. I could smell his blood from fifty feet away, the scent mingling with the alley's stink of dried urine and curdled milk.

I padded along on bare feet, the Bachelorette-style high heels I'd worn to the bar stuffed into my backpack purse. Stilettos were helpful in a waitress interview or on the dance floor, but hunting shoes they're not. I scanned for security cameras. The blurred images of me feeding in Boston had forced the move to Seattle. I was already deathly sick of the constant drizzle.

Mr. Rex was wobble-weaving a path farther and farther down the alley into sketchy territory—buildings with broken windows, a few rusted fire escapes hanging loosely on the walls, no lights in any of the windows. He stood at least six feet four, so he had a good eight inches on me, and he boasted enormous arms. For a forty-five-year-old, he was carrying very little flab. Still, easy pickings. As long as I did everything right, that is.

Slow and steady. Mom had drilled that command into me ad infinitum. Your prey must never suspect your presence. Become the wind.

She actually did say that. Every time. Then she'd giggle and touch the tip of her petite nose to show she was joking. I inherited that same nose, but not the nose-tapping habit. She was an odd bird. And I loved her to bits.

In most vampire movies, the prey suffers long minutes of terror. They scream. They beg. They die. Not so in the real world—my world, that is. It's not efficient hunting. The best kills are silent and over before the food knows it's dead, before their fight-or-flight response kicks in. An overtaxed heart makes the blood spurt with too much force. I'd wrecked a perfectly good white dress that way, a few months back.

Something whirred in the air far above me, but I couldn't see exactly what might be making that sound and was too hungry to care.

My gray eyes provided handy night vision. Rex was a red outline in the alley. Soon, he'd be outlined in chalk, and some poor cop would be trying to write up his case. Those suckers didn't get paid enough.

Choose your food carefully, Mom had taught me. My moral imperative was not to kill innocents. This was the hunting criterion Mom had drilled into my DNA. The food must be a murderer.

Rex hadn't been my first choice this month. At the start of this feeding cycle, I'd been tracking a man named Timothy Huxton and had fully intended to dine on him last Thursday. But the day before feeding day, he'd made the ninety-ninth call to KISW and won a two-week vacation to Mazatlán. My mouth watered as I thought of how much better he'd taste with a tan.

So I'd rushed to uncover Jordan Rex's lethal backstory, flipping through archived newspapers in the glass monstrosity known as the Seattle Public Library (my library science classes were coming in handy). I discovered him in the transcripts of a ten-year-old murder trial. Two wives dead in less than two years. Both judged as death by misadventure. I knew better.

We were getting closer to the docks. Waves crashed, and the occasional mournful foghorn moaned. Rex came to a dead end. He ambled right up to the wire fence blocking the alley—some sort of storage space. He stumbled against it, and the chain links rattled.

I took my first step into the open, and he turned and looked directly at me. "It's about time you showed up," he said. He didn't slur a single word.

I hesitated in mid-crouch. He knew I was following him? I could question him, but mom's voice came into my head: Never play with your food. I leapt forward with more speed than any human was capable of and reached out to grab Rex's shoulder and dip him down for feeding. At that exact microsecond, a puff puff pop came from above. I felt as if I'd been rabbit punched twice in the back and kicked in the leg.

I turned. Darts stuck out of my right shoulder and my lower back. Darts! Who used darts in this day and age? Another quivered in my thigh. The whirring in the sky grew slightly louder…