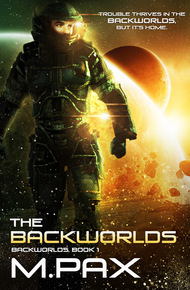 The Backworlds by M. Pax

In the far future, humanity settles the stars, bioengineering its descendants to survive in a harsh universe. This is the first book in the science fiction series, The Backworlds. Try it for free. A space opera adventure.

After the war with the Foreworlders, Backworlders scatter across the remaining planets. Competition is fierce, and pickings are scant. Scant enough that Craze's father decides to improve his fortunes by destroying his son. He tells his only boy their moon isn't big enough for them both and gives Craze a ticket for the next transport leaving the space dock.

Cut off from everyone he knows with little money and no knowledge of the worlds beyond, Craze must find a way to forge a new life and make his father regret this day. First, he must survive.

In the seven novel deep series of The Backworlds, I knew we had to include M. Pax's series starter, both for its crucial backstory and for the simple fact that it is a brilliant piece of science fiction in its own right. – Joseph R. Lallo