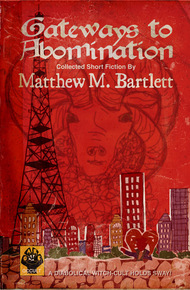 Matthew M. Bartlett is the author of Gateways to Abomination, The Witch-Cult in Western Massachusetts, and Creeping Waves. His short stories have appeared in a variety of anthologies, including Resonator: New Lovecraftian Tales From Beyond, High Strange Horror, Lost Signals, Nightscript 2, and Year's Best Weird Fiction Vol. 3. He lives and writes in a small brick house on a quiet, leafy street somewhere in Northampton, Massachusetts with his wife Katie Saulnier and their cats Phoebe, Peachpie, and Larry.

Bizarre radio broadcasts luring dissolute souls into the dark woods of Western Massachusetts. Sinister old men in topcoats gathered at street corners and the borders of playgrounds. A long-dead sorcerer returning to obscene life in the form of an old buck goat. Welcome to Leeds, Massachusetts, where the drowned walk, where winged leeches blast angry static, where black magic casts a shadow over a cringing populace. You're tuned in to WXXT. The fracture in the stanchion. The drop of blood in your morning milk. The viper in the veins of the Pioneer Valley.

Lovecraft wrote about horrors from beyond the stars, but was also a dedicated regionalist who explored the dark corners of New England. Matthew Bartlett channels Lovecraft the regionalist in this collection of linked stories about the Pioneer Valley he calls home. Local color (mostly black), static bursts, and sudden violence, are the hallmarks of this indie writer to watch. – Nick Mamatas

I was on a stool at the counter of the Look Diner, moving my scrambled eggs around the plate in the coagulating pool of ketchup and staring at my gray coffee, when the man walked in carrying his brain in his cupped hands.

The man wore a wrinkled gray suit over a pristine white Arrow shirt. He was of indeterminate age, with flattened dank hair and skin as white as his shirt. His mouth was agape, his eyes glazed with fear. He dropped down onto the stool next to mine, his legs slackening. Wordlessly, I slid over a bowl empty save a few tenacious flakes of dried oatmeal. Without acknowledging me, the man gingerly placed his brain in the bowl.

And so we sat as people around us ate and chattered and clinked their forks. Outside there was a violent stutter of thunder and the sky darkened as though somewhere a giant shade had suddenly been lowered.

I stole a glance at the man. The top of his head, just over the eyebrow, sat off kilter, like a hat just slightly askew. Blue stitches, inexpertly spaced, formed bridges over a thin wavering river of red bone. Tighter stitches toward the ear had squeezed out bubbles of brown blood, which had since hardened into beads.

A waitress rushing by stopped, and reached for the bowl. "Oh, I'm not quite finished," the man said in a polite purr, almost apologetically, and the waitress hurried on.

A cook with a broad brow reached up and spun the dial of the radio, which had been playing the greatest hits of the seventies, eighties, nineties and today, all the way to the left. The speakers thrummed with a low droning chord. The sky was blue-black. The clock read 8:05 a.m.

The man spun round on his stool to face me. Suddenly afraid, I stared straight ahead at the towering mountain of hashed potatoes. "ARE YOU LOOKING," the man intoned leeringly, "FOR A GOOD TIME?"

I have been asked that question, and variations thereof, as a boy, as a teenager, as a young man, and as a cipher of a man in middle age. I've been asked by a Cairo cab driver, a Panamanian pilot, a half dead priest in Prague, and a woman costumed as a koala bear on an impossible San Francisco incline. My answer has always been the same: No, but thank you.

But in the Look Diner, under a blackened sky, as people around us ate and chatted and clinked their forks, as potatoes piled toward the dingy ceiling, asked by a man who had come in carrying his brain in his cupped hands, as the radio droned with muttering, insinuating voices, as I could smell the spectre of death rising in plumes from my gray coffee, I said Yes, sir, if it will make you go away, if I don't have to look at your blazing eyes, if I could just be crouched under bedsheets a thousand miles from this cove of dark histories, I am...I am...looking...for...a...good...time.

He reached a long fingered hand into the inner pocket of his suit jacket and handed me a white flier folded in fourths. "Prepare for unspeakable pleasures," he cackled, and he plunged his face into the bowl. Slurping and snarling, he chewed and gnawed and gnashed, and his gray matter sprayed like ash, lighting on his browns, onto the counter. One sodden lump landed in my coffee and I slid from the stool and careened out of the diner, bellowing I know not what, the flier tubed up in my left hand, my right covering my eyes.