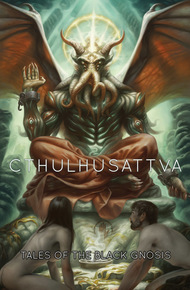 Scott R Jones is a writer, editor, spoken word performer, mostly unintentional comedian, and naturalized sorcerer living in Victoria BC Canada with his wife and two frighteningly intelligent spawn. His fiction and poetry have been published in Innsmouth Magazine, Andromeda Spaceways Inflight Magazine, Great Jones Street, and others, as well as a few anthologies and podcasts. He was once kicked out of England for some very good reasons.

Cthulhusattva: Tales of the Black Gnosis by Scott R Jones

When all is madness… there is no madness.

Is their wisdom in insanity? Enlightenment in blackest despair? Higher awareness in the depth of chaos? These are the stories of the men and women who choose to cast off from the shores of our placid island of ignorance and sail the black seas of infinity beyond. Those who would dive into primeval consciousness in search of dark treasures. Those who would risk the deadly light for one reason: it is still light.

The Lovecraftian enlightenment is here! What When the Stars are Right is for non-fiction, Cthulhusattva is for fiction. Fifteen tales, and some poetry as well, all about Lovecraftian cultists and the infinite awe that accompanies cosmic horror. New fiction by Kristi DeMeester, Jayaprakash Satyamurthy, Ruthanna Emrys, and many more. – Nick Mamatas

In Cthulhusattva: Tales of the Black Gnosis, you will find no dry tales of finely-tuned nervous college types getting on the wrong side of a nasty old book from the special collections. (I lie, a little: the narrator of Vrai Kaiser's Keys in Stranger Deserts starts there, but quickly moves off campus, and she's no nervous wreck.) Neither are there stories here of your standard Lovecraftian cultist: robes and ceremonial daggers are left at the door, as is that very particular crazed mindlessness we're so used to. (Don't worry, there's still a chant here and there.) And the gods (yes, gods, put that in your trilby and smoke it, peanut gallery!), the Great Old Ones themselves, are perhaps more awe-inspiring than ferocious within these pages. But then, as any spiritual seeker knows, deities tend to reflect back upon a supplicant the qualities they already carry to the altar. And the seekers herein are (for the most part) open, thoughtful, willing, and broad-minded. They are ready for the deadly light of revelation. They welcome it, and for one reason alone...

It is still light.

A mother and daughter carry out Nyarlathotep's divine will with reason and humility in the face of ignorant mania in John Linwood Grant's Messages, while two sisters move far beyond their comfortable worlds to hear the final shattering revelation of their curiously long-lived grandfather in Luke Maynard's That Most Foreign of Veils. In Antinomia, by Erica Ruppert, we travel with an unlucky medium and her followers across an apocalyptic landscape toward a meeting with destiny. Love, desire, and the power of lust are stripped back to their bare essences in Kristi DeMeester's heartbreaking The Wicked Shall Come Upon Him and the heady robustness of Gord Sellar's Hieros Gamos, while the temporary and ephemeral nature of the flesh is explored in Rhoads Brazos' Feeding the Abyss and Stefanie Elrick's excellently Barker-esque Mother's Nature.

There are sorcerers here, some wise (Don Raymond's dark nativity play We Three Kings) and some less so, though not for lack of trying (the wūshī who brings upon himself a grisly immortality in Emperor Eternal by Konstantine Paradias), and others for whom magic is a tool to be respected, like the famous Mississippi blues man called to the crossroads to combat the arrogant strivings of a struggling pulp horror writer in Jamie Mason's Mr. Johnson and the Old Ones. Jayaprakash Satyamurthy reveals the true nature of those Old Ones, and their ultimate expression, as deduced by those who wait At the Left Hand of Nothing.

Which brings us to the feature novella, Ruthanna Emrys' The Litany of Earth. This story first saw publication on Tor.com, and has appeared elsewhere since then, but I believe Litany has found its true spiritual home here in the humble pages of Cthulhusattva. This is something I feel confident in saying, and I'm grateful to Ruthanna for working with me so graciously to place it here. When I first read Litany, I knew it immediately for what it was: a perfect jewel of a story, each facet shedding light on some aspect of the Mythos that spoke to me. There is awe here, wonder and glory. There is pain that transforms, and longing, and compassion in the face of unknowable forces in an uncaring universe. In Aphra Marsh, Emrys has given us a character unlike any Lovecraftian protagonist that has gone before: wise, passionate, possessed not only of the strength of her physical heritage, but also that of her culture and history. If this is your first meeting with Ms Marsh, then I am happy it is here, and I envy you the experience.

Listen. Sunken bells toll in the deep. The stars sing of a death that is not death as they turn in their velvet sockets. Sleepers beneath the earth, and in the space between spaces, murmur of strange awakenings; do not mistake that sound for mere wind. Within your chest, between the beats of your mortal heart, the non-Euclidean towers and migraine cathedrals of the First City, the Dreaming City, begin to rise, and there is a burnt ozone taste of eternity in the air. Breathe. Centre yourself. And open your mind to the cosmos. For you are now invited to take the Cthulhusattva Vow, and learn that which only the enlightened can truly know…

When all is madness, there is no madness.