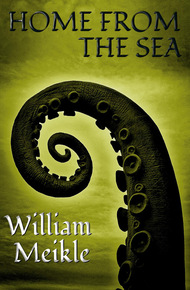 William Meikle is a Scottish writer, now living in Canada, with twenty novels published in the genre press and over 300 short story credits in thirteen countries.

He has books available from a variety of publishers including Dark Regions Press, DarkFuse and Dark Renaissance, and his work has appeared in a number of professional anthologies and magazines.

He lives in Newfoundland with whales, bald eagles and icebergs for company. When he's not writing he drinks beer, plays guitar, and dreams of fortune and glory.

Home From the Sea by William Meikle

In these pages you'll find some glowing fog, some mad scientists, some tentacled things, booze, dreaming gods, cigarettes, some boats of various sizes, a bar or two, some stiff upper lips, a ghosthunter, a great detective and a multitude of universes, among other things.

Home from the Sea contains 14 tales of Lovecraftian Terror.

William Meikle has been creating some of the best post-pulp pulp fiction around for years. Home from the Sea is a collection of his best Lovecraftian tales, created especially for this bundle. If you love the classics, you need this book. – Nick Mamatas

From the journal of Father Fernando. 17th August 1535

I already knew that strapado would not be an option for this particular miscreant. Nor would I be able to utilise the rack or the maiden. But fire would be more than sufficient for my purposes. It took little work to prepare the cell for Inquisition, as matters are already set up amply for the ordeal. I ensured that the lead casket was placed inside concentric circles of oil such that they could be lit immediately in the event of an attempt to escape. I also had a brazier full of coals at hand to my right side and three needle-pokers burning white hot in a small oven to my left.

Even before I opened the casket I felt the tickle in my mind but I pushed it away. My God is stronger than any heathen devil. I mouthed the Pater-Noster as I lifted the lid.

Once again the black ooze surged, and the tickle in my mind turned to an insistent probing. Memories rose unbidden in my thoughts; of summer days in warm meadows, of lessons learned in cold monastery halls, of penance paid for sins.

I was under questioning.

That I could not allow. I am master of this inquisition. Several wet mouths opened in the black ooze. Using a pair of pliers I plucked a hot coal from the brazier and as another mouth formed I let the coal drop inside.

The grip in my mind released immediately, replaced by a formless scream which quickly became a chant that echoed around the cell. I knew the words. I had read them in the captainís journal.

A long tendril reached from the lead box, coming towards me. I took a poker from the oven and with one smooth strike thrust it through the black material. The ooze retreated, shrinking back as far into the corner of the lead casket as it could get.

I leaned forward, a fresh poker in my hand.

ìAre you guilty?î I asked, and stabbed down hard.

The Inquisition proper had begun.