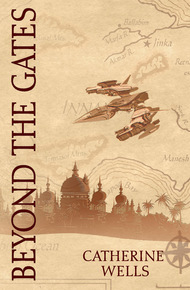 Catherine Wells is the author of numerous novels and short stories of speculative fiction, including the AnLab Award-winning Best Novella of 2015, "Builders of Leaf Houses," a sequel to "Beyond the Gates." Her Coconino trilogy and Mother Grimm are now available from Phoenix Pick, and her historical fiction Macbeatha (previously titled Stones of Destiny) is available from Desert Moon Press For more about her books and short stories, visit http://www.catherine-wells.com.

Beyond the Gates by Catherine Wells

"Dhrusil-matkhashi is a wasteland. The soil is sterile. Why do you suppose we stay on this continent?"

Marta, a graduate student researching indigenous life on isolationist Dray's Planet, discovers an animal that can't be indigenous, but which can't have come from anywhere else. The puzzle convinces the Children of the Second Revelation to bring two Unbelievers into their closed society. As the rival offworld scientists trek into the harsh desert to determine the creature's origins, Marta stumbles onto another mystery: why do folk tales speak of roarings and screechings from the planet's second continent, the uninhabitable Land Beyond the Gates? And why are the Faithful forbidden to set foot there?

Religious leaders will not sanction a trip to the uncharted land they deem uninhabitable. Marta must keep her expedition from coming to their attention, while keeping her difficult offworlders on task. After that, uncovering the secrets of the prohibited place ought to be the easy part. But they still have to live to tell the tale...

It was always a challenge to get information out of one of these nomads. Marta knew that to scratch out a living here in the Western Desert of Innanta, one had to be tough, tenacious and—frankly—a little daft. Or maybe the sun simply scorched their brains. For whatever reason, the young woman with more determination than patience knew it would be tricky getting this man to answer her simple question about sandslithers in Dhin M'Tarkhna.

"I killed a demon there this morning," he volunteered. "It's been pestering my goats for weeks."

Marta and six other students of the College of Indigenous Life had trekked into the desert in search of sandslithers, one of the higher life forms native to Dray's Planet. Their plan was to tag the primitive vertebrates and plot the range of their movements across the continent. She didn't think this statement about the demon was useful, but it was hard to tell.

"What kind of demon was it?" she prodded, knowing the word could refer to anything from a poisonous lachet bush to a bloodsucking maskoi to a foul-smelling breeze.

"An ugly one," replied the nomad, ruling out the breeze. "It flapped around like a chicken with no feathers, screeching its demon-song, for half the morning after I struck it."

That truly puzzled Marta. Of the dozen or so native species known to inhabit the Western Desert, none could screech. A monkey, perhaps, escaped from some rich kukhoosh's menagerie of exotic pets? Her dark eyebrows puckered in a frown. "Why didn't you stop its suffering?" she asked the goatherd severely, for it was forbidden to let an animal suffer cruelly when it was possible to give it a quick death.

The nomad was a full head taller than Marta, but like most of his kind he was intimidated by the dark-eyed young woman's air of authority. "Aii, if you saw its teeth, Sibna, you wouldn't ask that!" he defended.

Teeth! It must be a monkey, or some other Terran animal that had gotten loose and made a home for itself in the nearly unpopulated wasteland. Some Drayan marine species had cartilage protrusions which resembled teeth, but so far nothing like that had been found in a land animal. "Where did you kill the demon?" she asked the man, her curiosity roused.

He directed her over a rise and to a patch of thorny native shrubs, where she found the sun-warmed carcass of a creature she did not recognize. Its side had been bashed in by a sling stone, and the tracks of its dying agony were all over the sandy ground. Ugly as it was, Marta felt sorry for it. Its long, spindly neck was extended in the dirt, with one scrawny broken foreleg bent back at a painful angle and its muscular hind legs drawn up in a final convulsion. Picking up a stick from the desiccated vegetation that littered the ground, she turned the creature over. Dark fluid seeped from the wound and stained the earth beside the carcass.

"Fadnar, come here, look at this," Marta called to her companion. She tucked a strand of dark hair back under the flap of her headgear, resisting the temptation to wipe the perspiration from her neck. The droplets tickled, but they were meant to evaporate and cool her skin, not be brushed away.

Fadnar shouldered his pack with its precious water bottles and trotted over the rock-strewn ground toward her. Fadnar was twenty-one—younger than Marta by a couple of years—but he was fairly sure he knew everything there was worth knowing.

"What is it?" he asked as he peered at the creature over her shoulder.

Marta gave a short laugh. "It's one very nasty chicken," she commented. "Look at the teeth on it."

The goatherd had been right about that. This creature looked as though it could do serious damage to even a full-grown billy goat. It was only half a meter in length, but the single row of short, pointed teeth looked razor sharp, and the spindly front legs boasted a wicked looking set of claws for grasping and tearing. "A predator, no doubt about that," she murmured. "And a very efficient one, from the look of it."

Then Fadnar asked the obvious question. "But where did it come from?"

"Where, indeed?" Marta mused, her smooth olive skin furrowing as she puzzled. Since the Children of the Second Revelation had colonized Dray's Planet two centuries before, they had cataloged a variety of marine life, some of it fairly sophisticated; but nothing on land had yet demonstrated this degree of evolutionary development. Could it be some kind of bizarre cross between a native species and some Terran animal the colonists had brought with them? "Looks almost reptilian, doesn't it?" she observed.

"Can't be reptilian," Fadnar said decisively. "The only reptiles our forebears brought with them were a few tiny lizards. Nothing this big. Looks more like a bird, if you ask me. Without the feathers, of course."

"A dinka-chak, eh?" Marta suggested with a grin. In the local dialect, it meant "chicken lizard."

Fadnar grunted. "A dinka-chak p'trik nagg," he added—a chicken-lizard with nasty teeth. "But it can't be indigenous," he insisted again. "We've cataloged every species on this continent, and there's nothing like it anywhere. Nothing even close to it. It must have come from off-world."

Marta shot him a sharp look. "Nothing comes from off-world," she said flatly. "You know that."

Fadnar shrugged, unimpressed. "It had to come from somewhere. Here. Let's put it in a specimen box and take it back with us."

Yes, it had to come from somewhere, Marta thought as she helped scoop the remains into a small crate. But where? The Children of the Second Revelation had no commerce with Unbelievers. There was exchange of information, conducted at a safe distance, but no exchange of goods or people. The dinka-chak must be native. Yet Fadnar was right—from an evolutionary standpoint, it couldn't be.

Three months later, back in the laboratory of the College of Indigenous Life, Marta still had no answers. The fierce little creature with its mottled skin and yellow eyes was now mounted in a glass display, every organ and joint digitized and stored in the College's electronic files. From its glandular system to its DNA, nothing resembled any known Terran species. It had to come from a separate evolutionary line.

"Then why is there nothing else like you on the continent of Innanta?" Marta puzzled aloud as she studied a series of images on her monitor. "Where are your ancestors, your cousins, your crazy uncles? Do you hide them in a cave, or in the treetops, or under the sand?"

She passed a finger through the 3-D replica of a pelvis formed by three separate elements. "Where, little one," she asked, "did you get these bones?"