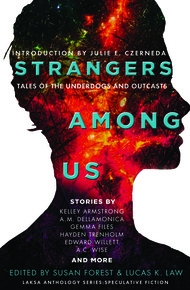 Susan Forest is a three-time Prix Aurora Award finalist and a writer of science fiction, fantasy and horror, and a freelance fiction editor. She co-edited two anthologies from Laksa Media, Strangers Among Us (2016) and The Sum of Us (2017), with Lucas K. Law. They are currently working on their third anthology, Shades Within Us (2018). Her stories have appeared in Asimov's Science Fiction, Analog Science Fiction and Fact, Beneath Ceaseless Skies, Tesseracts, AE Science Fiction Review, OnSPEC Magazine, and The Urban Green Man, among others. Her collection of short fiction, Immunity to Strange Tales, was published by Five Rivers Publishing. Susan is also Secretary for the Science Fiction and Fantasy Writers of America (SFWA). She teaches creative writing at the Alexandra Centre, and has appeared at numerous local and international writing conventions.

Lucas K. Law is a Malaysian-born freelance editor and published author who divides his time and heart between Calgary and Qualicum Beach. He co-edited two anthologies, Strangers Among Us (2016) and The Sum of Us (2017), with Susan Forest. They are currently working on their third anthology, Shades Within Us (2018). With Derwin Mak, Lucas co-edited Where the Stars Rise: Asian Science Fiction and Fantasy (2017). He has been a jury member for a number of fiction competitions including Nebula, RITA and Golden Heart awards. When Lucas is not editing, writing, or reading, he is an engineering consultant and business coach, specializing in mergers and acquisition (M&A) activities, asset evaluations, business planning, and corporate development.

Strangers Among Us edited by Susan Forest and Lucas K. Law

Who are the STRANGERS AMONG US?

We are your fathers and mothers, brothers and sisters, sons and daughters, friends and lovers. We staff your stores, cross your streets, and study in your schools, invisible among you. We are your outcasts and underdogs, and often, your unsung heroes.

Nineteen science fiction and fantasy authors tackle the division between mental health and mental illness; how the interplay between our minds' quirks and the diverse societies and cultures we live in can set us apart, or must be concealed, or become unlikely strengths.

We are taken into the desert at midnight. Taken far from the outer wall, so that no one travelling from the village in the days to come will stumble over our desiccated bodies. When we reached the spot, I see headless corpses stacked like cordwood, undisturbed from previous Cullings because there are no longer predators large enough to drag them away. The very sand around us is stained permanently red. Somewhere in that pile is my aunt. I turn away before I find myself searching for her.

The executioner works methodically. We are bound in a line, and he does not even free us from our ropes. We all kneel, still in that line, and he works his way down it. There are eleven of us. I know their names. Have spoken to them all before. In a village of two hundred, it is impossible not to have crossed paths. But here, we say nothing. We simply wait, resigned.

He limped into the kitchen, channeling his rage into the knurled handle of his cane. His mother had presented him with the device when he'd still believed in the merits of physiotherapy. She'd found it at one of those conventions where people wore elf ears and talked in made-up languages. She declared it "cool." Said it would reduce the embarrassment factor. Wrong.

He grabbed a broken bucket from under the kitchen sink and filled it to just below the crack. Slopping and sloshing with every step, he walked back and heaved the water through his second-story window at the roof of his booth.

How Objects Behave on the Edge of a Black Hole (A.C. Wise)

Maggie wondered whether her sister even believed the words.

"Dad was an asshole." Maggie's jaw clenched, heat behind the words she hadn't expected. "He tried to make mom sick during their divorce. He wanted her to kill herself."

The slap came too quickly for Maggie to avoid it—the crack of palm against cheek—and it left her ears ringing.

"You always take her side." Jan's nostrils flared. "You, and mom, and Gran. You and your little secret club. There was never any room for me. Dad was all I had."

Maggie gaped. Did Jan really think they'd tried to exclude her? A shared history of fucked up brain chemistry was just that, nothing more, nothing less.

The Dog and The Sleepwalker (James Alan Gardner)

To the Dog, the starship's bridge was quiet. He'd been told there was actually a din of chatter in the minutes leading up to a warp jump—members of the crew constantly calling out readings. But

the noise was restricted to the brain-chip connections that linked everybody else. The Dog had no augmentations, so all he heard was the soft shifting of people in their seats on the rare occasions when they had to push buttons with their actual fingers instead of just doing it with their minds.

After a long period of silence, the captain cleared her throat. "Mr. Bok," she said aloud, "are you ready for jump?"

"Very good," she said. She looked to make sure the Dog's hand was hovering above the insultingly large red button that was the one and only feature of the Dog's control console. She nodded

I Count the Lights (Edward Willett)

He sighed. He'd almost taken early retirement from Diplomatic Corps Security three years ago, and if he had, he and Annie would currently be fishing in the mountains of Montana and hoping against hope their daughter would find someone with whom to give them grandchildren. But the opportunity to be head of security at a major new embassy on a newly opened planet had seemed too good to pass up. The pay was very, very good. Though Annie hadn't made the trip out here with him, she'd visited a

couple of times, courtesy of the free-transportation program that had also landed him with the Boynton problem.

I guess we can still go fishing after I'm cashiered out the service, he thought wistfully. In a much smaller boat. Wearing a disguise. Which will also be useful for panhandling for loose change on weekends.

He sent a final note to Simon, updating his secretary on where he was and what he was doing. If he fell off the Tower like the Ambassador . . . well, it would end all hope of a trade agreement, for one thing, but what really concerned him was that he not simply vanish without Annie ever knowing what had happened.

"No!" Ling jumped to her feet, whirling on Jake, seizing one black wing so he couldn't fly off. "You're going to save him."

"No mooncake stone, no miracle. Someone's dying today or the whole blanket shreds." He hopped back, eyes flinty, slipping out of her grip. The handful of feathers in her hand turned to a

crumpled piece of paper. On it was a cartoon doodle Eddie had done: her and Xian, dancing.

"Don't you get it, kid?" His voice was almost fond. "Eddie don't want someone else to die in his place."

Her eyes misted. "You could—"

"I'm letting him choose," he said. "Letting you choose, too."

Another shriek from the hallway. Nothing there, she thought, nobody who can hurt him. It was a

rationalization. Some of the dead kids had fatal seizures; one had hanged herself.

The slug thrower was too rough a tool, but a pistol shot was uncertain at such distance. Marion dumped her pack and bandolier behind a rock and slithered closer, finding cover in the patchy vegetation. She had been sent to kill the commandant. What happened after didn't matter. Everyone else was dead; why not her, too?

Hold on, baby, hold on. Darwin's head lolled against her shoulder,his eyes fixing on her face. Blood bubbled on his lips. "Leave me, I'm done." His hands pawed futilely at the haft of the G'rat'ch spear. "The mission matters more." Marion nodded. HQ needed to know the names of the traitors. Darwin drew a long breath, let it out, and was silent. She let his body slump to the forest floor. She touched his face. Then she ran.