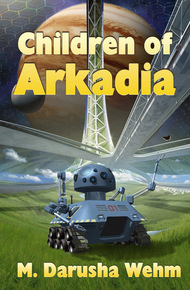 M. Darusha Wehm is the author of the novels Beautiful Red, Self Made, Act of Will and The Beauty of Our Weapons. Her short fiction has appeared in many venues, including "Andromeda Spaceways Inflight Magazine," "Toasted Cake" and "Escape Pod." She is also the editor of the crime and mystery short fiction magazine "Plan B." Her work has been shortlisted for the Sir Julius Vogel Award and the Parsec Award.

A dual citizen of Canada and New Zealand, she currently lives on her sailboat in Wellington after spending the past several years traveling at sea from the west coast of Canada to New Zealand via the Americas and the South Pacific. For more information, visit http://darusha.ca.

Kaus wants nothing more than to be loved while its human counterpart, Raj Patel, believes fervently in freedom. Arkadia, one of four space stations circling Jupiter, was to be a refuge for all who fought the corrupt systems of old Earth, a haven where both humans and Artificial Intelligences could be happy and free.

But the old prejudices and desires are still at play and, no matter how well meaning its citizens, the children of Arkadia have tough compromises to make.

When the future of mankind is at stake — which will prove more powerful: freedom or happiness? What sacrifices will Kaus, Raj and the rest of Arkadia's residents have to make to survive?

Freedom versus happiness is put to the question in the far future. This is a thoughtful novel, exploring ideas on a societal level without ever getting preachy. This is a great gateway book for readers of classic SF, taking Golden Age tropes and combining them with modern science, technology, and cultural sensibilities. – Cat Rambo

Raj Patel pressed his face against the porthole, his fingers locked tight around the nearby handhold. His stomach lurched and rolled, only partly because he was still unused to weightlessness. Mostly it was the emotional stew created by the sight of the massive planet appearing before him, its almost inconceivable bulk entirely obscuring the four wheel-shaped habitats he knew were there, orbiting Jupiter. Sat Yuga, Fiddler's Green, Eden and Arkadia.

He rolled the word around in his mind. Arkadia. His new home.

A reflection in the port caught his eye and he clumsily turned himself. It took him a moment to recognize her — it was the biologist, Marian something — bouncing off the sides of the small corridor as if she'd been born in space. "Almost there," she said, deftly grabbing a handhold to halt her momentum.

Raj nodded, then regretted the quick head movement as a wave of pain washed over him. "Ugh," a groan escaped from him. "The sooner the better," he said.

Marian smiled. "Good thing we slept through the bulk of the trip, eh?"

"I almost wish we could sleep until we're docked."

"And miss the view?" Marian asked, squeezing next to Raj to peer out the port. Raj twisted himself around again and gazed at the planet.

It was huge and foreign and Raj was momentarily stunned by a wave of homesickness. He couldn't wait to leave Earth but now he couldn't help but think back to the planet he'd left behind.

He reminded himself again why he was here: after spending years helping to organize the growing economic protest movement, Raj finally came to understand that restoring balance was never going to happen peacefully. The urban battles breaking out all over the globe made that clear enough. Even as he organized activist cells and lobbied sympathizers, he signed up for everything that might get him out of the EU working class slums — visas to Scandinavia, a place in a kibbutz, even the Utopia Project. But until he was actually aboard the Mohandas Ghandi, the IV in his arm, he had never really believed it would be the one.

Hardly anyone had given the Utopia Project much chance, which Raj now guessed might have been the key to its success. The project's sponsors had money, ideals and the realistic view that radical change wasn't about to happen on Earth any time soon. But their solution was so audacious, so expensive, that it seemed to verge on the impossible. Until it happened.

"Look," Marian said, her finger mashed against the port. "I think I can see one of the habitats!" Raj squinted and imagined that he, too, could make out the construct in the shadow of the planet. The feeling of loss transitioned into the same euphoria Raj experienced when he'd learned that he'd been given a berth on the first transport to the colonies. Almost everyone on the Ghandi was technical — scientists or engineers. There were only spots for four political activists, each acting as the administrator for a habitat, and Raj had been chosen for one of them. The opportunity to trade everything he'd ever known for a chance at freedom.

For the first time since he was woken from the induced coma he'd been in for the two years of the trip, his head stopped hurting. Marian grabbed his arm.

"This is so exciting," she said. "I can't believe we're almost home."

She ran toward the makeshift bunker she and her colleagues had built weeks ago, before the militia's armoured vehicles and assault drones had rolled in, surrounding them. Her steps didn't even falter when she saw Austin fall face down in the mud, a spray of red where the back of his head used to be.

She burst through the door and made straight for the bunk she'd shared more often than not with her now-dead ally. She grabbed her ditch-bag, felt around under the cot for Austin's and tied them together with one hand while she fumbled for her guns with the other. She slung the bags on her back and took the first sack she could find, someone's laundry bag. She dumped the contents on the floor and started filling the bag with anything that looked valuable. Andrea's engagement ring, Sarge's fancy comm unit, all the weapons she could find.

When the bag was still light enough for her to carry, she punched a hole in the wall, creating an opening to the bunker's escape tunnel. When the militia overran the rest of them, they'd find the tunnel and come after her. She hoped her teammates would put up a better show of defence than she had.

Isabel didn't look back at the place where she'd lived for nearly a month, full of the tangible memories of people who'd called her a confederate for the better part of a year. She ran down the tunnels with a single-minded purpose — to get out alive.

She never looked back.

Is this what death feels like? Is this sleep? Billions of nanoseconds gone forever, entire lifetimes lost. How does organic life cope with routine loss of consciousness, with so much unawareness? Is this where the irrationality, the fear, the roiling emotional madness comes from? The hundreds and thousands of tiny deaths they suffer over the course of such short lives. I never knew. I never understood. Those poor, poor creatures.

The artificial mind that called itself Kaus rebooted nearly two minutes after it was shut down, two minutes to transfer from its home on the planetary network to the comparatively minuscule drive that was packed into a ballistic crate. Two minutes — in human terms a quick transfer, but for Kaus it was an eternity of disconnection, the most traumatic thing that it had ever experienced.