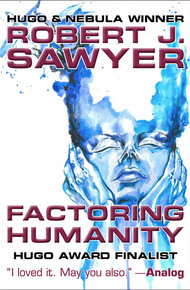 Rob's novel FlashForward was the basis for the ABC TV series of the same name, and he was a scriptwriter for that program. He also scripted the two-part finale for the popular web series Star Trek Continues. His column "Decoherence," about the state of the science-fiction genre, appears in each issue of Galaxy's Edge magazine. His 24th novel, The Oppenheimer Alternative, will be published in June 2020.

In 2007, a signal is detected coming from the Alpha Centauri system. Mysterious, unintelligible data streams in for ten years. Heather Davis a professor in the University of Toronto psychology department, has devoted her career to deciphering the message. Her estranged husband, Kyle, is working on the development of artificial intelligence systems and new computer technology utilizing quantum effects to produce a near-infinite number of calculations simultaneously.

When Heather achieves a breakthrough, the message reveals a startling new technology that rips the barriers of space and time, holding the promise of a new stage of human evolution. In concert with Kyle's discoveries of the nature of consciousness, the key to limitless exploration – or the end of the human race – appears close at hand.

Sawyer, another former SFWA President, has been called the dean of Canadian science fiction. Factoring Humanity is realistic science fiction with a positive-future feel. The story is character-driven, while always drawing on the realities of science, in a way that SF fans will find truly satisfying. Sawyer says, "My mission statement as a writer is to combine the intimately human with the grandly cosmic, and, of all my 23 novels, I feel I succeeded the best at that with this Hugo Award-nominated book." – Cat Rambo

Dr Kyle Graves has just arrived at the lab.

Kyle took off his hat and hung it on the old wooden coat rack – universities never threw anything out; this one must have dated back to the 1950s. He started the coffeemaker, then took a seat in front of a computer console, its front panel banked at forty-five degrees. In the center of the panel were two small lenses that tracked in unison like eyes.

"There's this French physicist, see," said Cheetah's voice, coming from a speaker grille below the mechanical eyes. "This guy's working at CERN and he's devised an experiment to test a new theory. He starts up the particle accelerator and waits for

the results of the collision he's arranged. When the experiment is over, he rushes out of the control room into the corridor, holding a printout showing the trails of the resulting particles. There, he runs into another scientist. And the other scientist says to him, Jacques, he says, did you get the two particles you were expecting? And Jacques points first to one particle trail and then to the other and exclaims: "Mais oui! Higgs boson! Quark!"

Kyle stared at the pair of lenses.

"A Higgs boson is a particle with zero charge and no intrinsic spin; a quark is a fundamental constituent of protons and neutrons."

"I know what they are, for Pete's sake. But I don't see why the joke is funny."

Kyle sighed. "Cheetah, that's too elaborate. For a pun to work, the listener has to get it in a flash. It's no good if you have to explain it."

Cheetah was quiet for a moment. "Oh," he said at last. "I've disappointed you again, haven't I?"

Cheetah was an APE – a computer simulation designed to Approximate Psychological Experiences; he aped humanity. Kyle had long been a proponent of the strong-artificial-intelligence principle: the brain was nothing more than an organic computer, and the mind was simply the software running on that computer. When he'd first taken this stance publicly, in the late 1990s, it had seemed reasonable. Computing capabilities were doubling every five years; soon enough, there would be computers with greater storage capacity and more interconnections than the human brain had. Surely once that point was reached, the human mind could be duplicated on a computer.

The only trouble was that that point had by now been attained. Indeed, most estimates said that computers had exceeded the human brain in information-processing capability and degree of complexity four or five years previously.

And still Cheetah couldn't distinguish a funny joke from a lousy one.

"If I don't disappoint you," said Cheetah's voice, "then what's wrong?"

Kyle looked around his lab; its inner and outer walls were curved following the contours of Mullin Hall, but there were no windows; the ceiling was high, and covered with lighting panels behind metal grids. "Nothing."

"Don't kid a kidder," said Cheetah. "You spent months teaching me to recognize faces, no matter what their expression. I'm still not very good at it, but I can tell who you are at a glance – and I know how to read your moods. You're upset over something."

Kyle pursed his lips, considering whether he wanted to answer. Everything Cheetah did was by dint of sheer computational power; Kyle certainly felt no obligation to reply.

And yet no one else had come into the lab so far today. Kyle hadn't been able to sleep at all last night after he'd left the house – he still thought of it as "the house," not

"Heather's house" – and he'd come in early. Everything was silent, except for the hum from equipment and the overhead fluorescent lights, and Cheetah's utterings in his deep and rather nasal voice. Kyle would have to adjust the vocal routine at some point; the attempt to give Cheetah natural-sounding respiratory asperity had resulted in an irritating mimicry of real speech. As with so much about the APE, the differences between it and real humans were all the more obvious for the earnestness of the attempt.

No, he certainly didn't have to reply to Cheetah.

But maybe he wanted to reply. After all, who else could he discuss the matter with?

"Initiate privacy locking," said Kyle. "You are not to relay the following conversation to anyone, or make any inquiries pursuant to it. Understood?"

"Yes," said Cheetah. The final "s" was protracted, thanks to the vocoder problem. There was silence between them. Finally, Cheetah prodded Kyle. "What was it you wished to discuss?"

Where to begin? Christ, he wasn't even sure why he was doing this. But he couldn't talk about it with anyone else – he couldn't risk gossip getting around. He remembered what happened to Stone Bentley, over in anthropology: accused by a female student of sexual harassment five years ago; fully exonerated by a tribunal; even the student eventually recanted the accusation. And still he'd been passed over for the associate deanship, and, to this day, Kyle overheard the occasional whispered remark from other faculty members or students. No, he would not subject himself to that.

"It's nothing, really," said Kyle. He shuffled across the room and poured himself a cup of the now-ready coffee.

Kyle managed a wan smile. He knew Cheetah wasn't really curious. He himself had programmed the algorithm that aped curiosity: when a person appears to be reluctant to go on, become insistent.

Still, he did need to talk to someone about it. Christ, he had enough trouble sleeping without this weighing on him.

"My daughter is mad at me."

"What?" The nasal twang made Cheetah's voice sound all the more solicitous.

"She says I molested her."

Kyle exhaled noisily. No real human would have to ask that question. Christ, this was stupid…

"In what way?" said Cheetah again, no doubt after his clock indicated it was time to prod once more.

The microphone on Cheetah's console was very sensitive; doubtless he heard. Still, he was quiet for a time – a programmed affectation. "Oh," he said at last.

Kyle could see lights winking on the console; Cheetah was accessing the World Wide Web, quickly researching this topic.

"You're not to tell anyone," said Kyle sharply.

"I understand," said Cheetah. "Did you do what you are accused of?"

Kyle felt anger growing within him. "Of course not."

"Can you prove that?"

"What the fuck kind of question is that?"

"A salient one," said Cheetah. "I assume Rebecca has no actual evidence of your guilt."

"And one presumes you have no evidence of your innocence."

"Then it is her word against yours."

"A man is innocent until he's proven guilty," said Kyle.

Cheetah's console played the first four notes from Beethoven's Fifth Symphony. No one had bothered to program realistic laughter yet – Cheetah's malfunctioning sense of humor hardly required it – and the music served as a placeholder. "I'm supposed to be the naive one, Dr. Graves. If you are not guilty, why would she make the accusation?"

Kyle had no answer for that.

Cheetah waited his programmed time, then tried again. "If you are not guilty, why –"