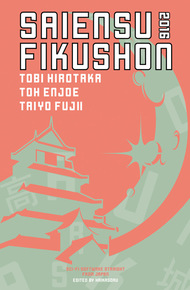 In 2012, Taiyo Fujii burst on the scene by self-publishing the Amazon.co.jp's top seller Gene Mapper serially in a digital format of his own design. Hayakawa Publishing's 2013 version was nominated for the Nihon SF Taisho Award and the Seiun Award. His next book, Orbital Cloud, won the 2014 Nihon SF Taisho Award and first prize in the Best SF of 2014 in SF Magazine. Fujii's short fiction has appeared in Lightspeed Magazine and The Best Science Fiction of the Year.

Toh EnJoe was born in Hokkaido in 1972. After completing a PhD at the University of Tokyo, he became a researcher in theoretical physics. In 2007 he published Self-Reference ENGINE, which caused a sensation in SF circles and which was ranked number two on SF Magazine's list of the best science fiction of the year. Since then, EnJoe has been one of those rare writers comfortable working in both "pure literature" and science fiction, with short fiction appearing in Strange Horizons and Granta.

TOBI Hirotaka was born in 1960. He was the winner of the Sanseido SF Story Contest while a student at Shimane University. From 1983 to 1992 he contributed short stories to SF Magazine. After a ten-year hiatus, he returned in 2002 with his first novel. Grand Vacances: Angel of the Ruined Garden I took second prize in SF Magazine's Best SF 2002. In 2004, his story collection Kaleidoscape took top honors in that year's Best SF in the magazine and won the 2005 Japan SF Award. "Autogenic Dreaming: Interview with the Columns of Clouds" earned Tobi his second Seiun Award for Best Japanese Short Story in 2010.

Three new stories from three of the best science fiction writers in Japan:

"Overdrive" by Toe EnJoe — How fast is the speed of thought?

"Sea Fingers" by TOBI Hirotaka — A small enclave survives after the Deep has consumed the world, but what does the Deep hunger for now?

"A Fair War" by Taiyo Fujii — The future of war, the age of drones—but what comes next?

Saiensu Fikushon is Haikasoru's new e-first mini anthology series, dedicated to bringing you the narrative software of tomorrow, today. Now more than ever, the future is Japanese!

The Science Fiction & Fantasy Writers have members all across the world and Saiensu Fikushon let me showcase how far science fiction can stretch. These three stories each come from one of Japan's best science fiction writers. – Cat Rambo

From "A Fair War"

A killbug was a drone used to indiscriminately kill in the name of ETIS's fight for an independent nation in the Xinjiang territory. Their small frames were fitted with AK-47 stocks and receivers made in small-scale Tibetan factories, and short, unrifled barrels capable of ring 7.62 mm rounds. Like the PLA's Bingfeng MUCAVs, the drones were killing machines equipped with internal AI capable of seeking and destroying targets by their own will.

The cheap gunpowder available to the killbugs wouldn't provide enough velocity for the bullets to penetrate reinforced concrete. If my memory was correct, the drone only carried twenty rounds. Even if it decided to expend it all in one blind volley, as long as we kept our heads below the windowsill, we would be all right.

Diving for the window had been the right course of action.

I signaled with my hands to let Wen, Jinzhu, and Aypasha know that we had a killbug outside. But when I looked across the office, I saw something that left me stunned with disbelief.

Across the office, Bateer stood, his mouth hanging open. He, and the rest of the staff, were staring in bewilderment at us four crouching beneath the windows. I began to shout, "Wodao!"— "Get down!"—but realized that they would be unfamiliar with military speak.

Plainly, I said, "Bateer, everyone, duck your heads! It's coming to the window. A killbug is out there."

A few slowly lowered their heads, but Bateer simply looked out the window with a confused expression. No, duck first, I thought to him, then look.

As I was about to speak up, a breeze came into the room. I heard two sounds: a door opening, and a voice speaking in thick Japanese.

It was Kuma, the head of the company. He picked a hell of a time to show up at work.

His stocky frame draped with a relaxed beige suit, the boss grabbed the brim of his white hat and was making a show of doffing it as his gaze landed on my signaling hand.

Now in gruff, Shanghai-accented Chinese, he said, "Outside the window?" He squinted in that direction. "That's a PLA Bingfeng—no, wait. An ETIS killbug, then? Wouldn't have thought to see one coming here."

From his breast pocket, Kuma withdrew a pink tube roughly the size of a cigar and pointed it at the window.

"You four best move away from the window, just in case. I'm gonna fry that thing."

I didn't understand what he was doing, but he said it so forcefully that we obeyed without a word, moving away from the window and ducking down even lower.

His thick thumb, with hair coming all the way down to the second knuckle, pressed against part of the tube.

The sound of the thing, like a peanut shell bursting open, sent my hair standing on end.

"Ow, ow, ow!" Kuma said with a grimace as he tossed the pink cylinder to the ground.

The tube rolled to a stop near my feet, where it sent out wisps of smoke and the acrid smell of burning plastic.

"You're not supposed to use it without gloves," Kuma explained, walking to the window next to me. He put his hands on the sill.

I picked up the smoldering pink tube. It carried a label marked Ying-xiang (Bug Fumigant) followed by usage instructions that extolled its effectiveness against killbugs.

I couldn't tell if it had broken naturally through use or if it had broken when Kuma dropped it. On one end, a triple-A battery peeked out from the loosened cap. As I was inspecting the device, Kuma spoke.

"It's an EMP. Look for yourself." He gestured out the window with his chin.

I stood and followed his sightline out the window, where the killbug was gradually dropping altitude in search of a place to land.

"Its sensors are all dead," my boss explained. "CPU's probably fried, too."

"This thing, it's called a ying-xiang?" I asked. I pulled two triple-A batteries from the husk. "I never would have thought something with this little power could make an EMP strong enough to fry a killbug."

Kuma's eyes widened. "Well, look at you, soldier. I didn't know you talked. All I ever hear you say is shi."

"What? I mean, maybe three months ago, sure, but I've adjusted."

"I suppose so. No offense," Kuma said with a chuckle. His eyes followed the killbug.

"Those little drones are made with cheap components. Each killbug costs about eighty dollars to make—that's what, five hundred yuan? But even their blind fire will kill people in a crowd. They can shoot through windows, and if they crash, the ammonia in their fuel cells sprays out everywhere and makes quite a stink. As far as cost-performance ratio goes, it doesn't get much better than that."

Before I could respond, someone else spoke up from behind me.

I turned and saw it was Bateer. His face looked ashen and blood-drained, and his eyes were wide.

I don't know if he just didn't hear me, but the next thing he did was duck in a panic. Losing balance, he stumbled over his chair and toppled to the ground on the other side. Likewise, the other staff finally got around to crouching.