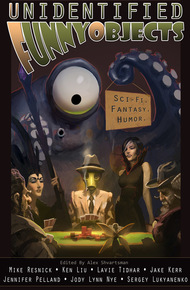 Alex Shvartsman is a writer, translator and game designer from Brooklyn, NY. Over 90 of his short stories have appeared in Nature, Galaxy's Edge, InterGalactic Medicine Show, and many other magazines and anthologies. He won the 2014 WSFA Small Press Award for Short Fiction and was a finalist for the 2015 Canopus Award for Excellence in Interstellar Fiction. He is the editor of the Unidentified Funny Objects annual anthology series of humorous SF/F. His collection, Explaining Cthulhu to Grandma and Other Stories and his steampunk humor novella H. G. Wells, Secret Agent were both published in 2015. His website is www.alexshvartsman.com

Unidentified Funny Objects is the first volume in the ongoing series of anthologies collecting humorous science fiction and fantasy stories. Packed with laughs, it has 29 stories ranging from lighthearted whimsy to the wild and zany.

WARNING: Some stories contain R-rated content and are inappropriate for minors, nuns, and anyone who lacks a sense of humor.

"El and Al vs. Himmler's Horrendous Horde from Hell" by Mike Resnick
"The Alchemist's Children" by Nathaniel Lee
"Moon Landing" by Lavie Tidhar
"Fight Finale from the Near Future" by James Beamon
"Love Thy Neighbors" by Ken Liu
"The Alien Invasion As Seen In The Twitter Stream of @dweebless" by Jake Kerr
"Dreaming Harry" by Stephanie Burgis
"The Last Dragon Slayer" by Chuck Rothman
"The Real Thing" by Don Sakers
"2001 Revisited via 1969″ by Bruce Golden
"The Working Stiff" by Matt Mikalatos
"Temporal Shimmies" by Jennifer Pelland
"One-Hand Tantra" by Ferrett Steinmetz
"Of Mat and Math" by Anatoly Belilovsky
"Timber!" by Scott Almes
"Go Karts of the Gods" by Michael Kurland
"No Silver Lining" by Zach Shephard
"If You Act Now" by Sergey Lukyanenko
"My Kingdom for a Horse" by Stephen D. Rogers
"First Date" by Jamie Lackey
"All I Want for Christmas" by Siobhan Gallagher
"Venus of Willendorf" by Deborah Walker
"An Unchanted Sword" by Jeff Stehman
"The Day They Repossessed my Zombies" by K.G. Jewell
"The Fifty One Suitors of Princess Jamatpie" by Leah Cypess
"The Secret Life of Sleeping Beauty" by Charity Tahmaseb
"The Velveteen Golem" by David Sklar
"The Worm's Eye View" by Jody Lynn Nye
"Cake from Mars" by Marko Kloos

Shvartsman has been making a name for himself with his anthologies, and UFO is full of funny, bright stories that will entertain and delight. Authors include Marko Kloos, Ken Liu, Jody Lynn Nye, Mike Resnick and Lavie Tidhar. – Cat Rambo

I realized I was in trouble when my realm-appointed lawyer showed up drunk and asked for spare coins. He made a valiant effort to defend me in the courtroom, but his lack of judicial knowledge, poor grasp of language, and mispronunciation of my name proved futile against the realm's brilliant case. It didn't help that the prosecutor was an experienced medium. He used my incorporeal, perpetually disappointed mother as a character witness.

I was sentenced to death. The executioner immediately wheeled out a guillotine to a short round of applause.

"They always like this part," the executioner confided. "It's a bit dramatic, but it keeps things flowing."

"That's why I got into this line of work." He tied up my hands and placed my head underneath the blade. "It's a people business, you know?"

I looked up. "This is a rather small guillotine."

"Travel-sized! The brochure says it has the class of a full-sized guillotine, but the portability of an axe." The executioner leaned in. "Honestly, do you think the wheels are too much? They cost extra, but I believe they were worth it."

"Completely worth it. It'd be hell to carry."

"Exactly! If I hurt my back and I'm stuck in bed, how am I supposed to live my life? I might as well be dead."

"Be careful what you wish for."

Then the blade came down.

It was my first beheading, but my gut told me something didn't go right.

I woke up face down on a rug. The rug was in a library, so I guessed I was there too, but I was loopy and didn't trust my logic. I sat up and waited patiently for the room to stop flipping end over end.

"You're supposed to be thanking me," said a voice.

When the world settled, I saw an old man. A shabby wizard's hat hung so crooked on his head that his left eye peered through a hole in the brim. There was a steaming teapot sitting on the table next to him.

"It's not mine?" I suddenly, desperately wanted that tea.

"It is yours," he assured. "But it's essential that you thank me for saving your life. Then you will feel indebted to me and we can work together." He straightened himself. "You see, I enchanted that guillotine to summon you here when the blade came down."

He leaned forward, as if anticipating a treat.

The old man jumped off his stool, circling as he spoke, each word awkwardly punctuated with a tap from his cane. He complimented my many ingenious confidence schemes. He was honored to meet the man that resold the Arduian Queen her own castle, convinced the Farwellian fishermen to drag the Desert of the Dead, and tricked the entire town of Lamden to go without pants for an entire year.

It seemed quite impressive, save for a single problem: I had no idea what he was talking about. However, he clearly went to great lengths to save my life and I didn't want to disappoint him into reversing that decision. I played along, saying "Thank you" and "Honestly, it was child's play" throughout his rant.

"My name is Pinion, grandmaster enchanter," he said at the end of his rant. "I'm sure you've heard of me."

"Why would you do that?"

He blinked. "Isn't that your name?"

"Yes, of course," I lied. "I've had so many names it's hard to keep track. Dunri, Jeremiah, Copernicus, Hansel, Delilah."

Pinion led me to the window. His movements were excited and fast, like a bird walking on hot coals. I looked out the window before his excitement caused him to burst into flames.

Outside was a vast, moving forest. The giant trees swayed back and forth, snoring as they slept in the afternoon sun. A few were awake and picked at some deer carcasses.

"Treants," I said. I had heard of the mystic living trees, but had never seen them with my own eyes. "They're magnificent. Are you studying them?"

"No, nothing of the sort," Pinion replied.

"Seeing as they are such magnificent creatures, I thought you'd help me round them up and cut them down. Tea?"