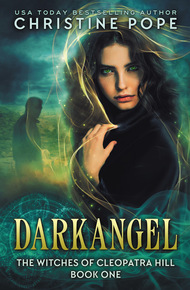 Darkangel - The Witches of Cleopatra Hill Book 1 by Christine Pope

Finding the man of your dreams can be a real nightmare….

As the future prima, or head witch of her clan, Angela McAllister is expected to bond with her consort, her soul mate, during her twenty-first year, thus ensuring that she will come into her full powers at the appointed time. The clock is ticking down, and her consort has yet to make an appearance. Instead, her dreams are haunted by a man she's never seen, the one she believes must be her intended match. But with time running out, and dark forces attempting to seize her powers for their own, Angela is faced with a terrible choice: give up her dreams of the man she may never meet and take the safer path, or risk leaving her clan and everyone in it at the mercy of those who seek their ruin.

His back was to me when I entered the living room. All I saw was someone tall, with dark hair, and for a second my heart leapt. Maybe it's finally him….

But then he turned toward me. Dark eyes met mine, and my heart fell, just as it had every other time the candidate was someone tall and dark-haired, but also definitely not the man who had been haunting my dreams for the past five years.

My aunt smiled at the stranger, then at me. Deep down, I had to admire her for being able to summon a real-looking smile after all these disappointments. "Angela, this is Alex Trujillo."

"Hi," I said, and managed a smile of my own. I had a feeling it wasn't quite as believable as my aunt's.

I could tell he was looking at me but trying not to seem as if he was looking at me. By that point I was more or less used to it, even though I didn't like it very much. These encounters never lasted long enough for me to ask what the young men were looking for, precisely, although I had a feeling most of the time they'd been expecting more from the McAllister clan's prima-in-waiting. My friend Sydney had tried to tell me more than once that I could be beautiful if I just worked at it a little, which made no sense to me. Either you were beautiful, or you weren't.

Judging by the studiously neutral expression on this Alex Trujillo's face, I guessed he thought I fell in the second category.

"Well, I'll leave you two to get acquainted," my aunt said, and disappeared down the hall that led to the kitchen. Some truly amazing smells were drifting through the hallway and into the living room.

Poor Aunt Rachel. Every time we went through this whole song and dance, she had a big meal going, just in case this candidate would turn out to be the one and so would need to stay for dinner. Good thing her "friend" Tobias came by regularly to eat with us, or there would've been a heck of a lot of roasts and chili and tamales piling up in the freezer.

You'd think after doing this forty-three times, I'd be a little better at it. I cleared my throat and said, "So, um, Alex…where are you from?"

The first five or six times I'd tried poking around on Facebook and using Google to dig up as much background information about the candidate as possible, wanting to be forearmed. Then I realized if I already knew everything about the guy, we wouldn't have anything to talk about. So these days I just went in blind and hoped for the best.

Alex shifted his weight from one foot to the other. With the exception of my cowboy boots — he was wearing black Chucks — we were dressed a lot alike, both in jeans and black T-shirts. His skin was warm olive, and Aunt Rachel was right…he was good-looking. If it weren't all so awkward and strange, I wouldn't have minded kissing him, even if he wasn't the man of my dreams.

Which meant, despite his last name, that he was part of the de la Paz clan. Maya de la Paz was the prima of that clan, which counted both Tucson and Phoenix as part of their territory. Compared to that, we McAllisters, with our little corner of northern Arizona, were pretty small potatoes. This was the first time a de la Paz had been offered as a candidate, and I wondered why they'd bothered at this point. Alex had to be a more fringe relation…or maybe not. The McAllister clan was not as powerful as the de la Pazes, but then again, I wasn't just any witch.

I was the next prima.

"So you're one of the de la Pazes?" I asked, even though I already knew the answer. "And Maya de la Paz is your…?"

"Grandmother," he supplied at once.

A direct relation, then. Interesting. Probably I should have known that, but trying to keep track of all the twigs and branches in my own family tree was work enough without delving into those of the other clans. Aunt Rachel reveled in that sort of thing, and kept detailed lists and charts. Handy, I supposed, when so many in a clan were related to one another in some way.

Not that witches and warlocks couldn't marry outside their clans, of course. It was good to bring in fresh blood — or else I wouldn't have Alex Trujillo standing in front of me right now — but there were still a lot of third and fourth cousins married to one another even so. And now that I thought about it, I seemed to recall a McAllister marrying into the de la Paz clan a few generations back, so Alex and I still might be related, if only tangentially.

But I knew I was letting my thoughts wander so I wouldn't have to think about the task at hand. This would be a lot easier if we could both share a drink or two first and get a little tipsy, let our guards down a bit. Custom dictated, however, that we go into this clear-headed and wide-eyed. Otherwise, our reactions could be clouded by the alcohol, and that wouldn't do at all.

"So she's okay with this?" I asked. Probably not all that tactful, but I couldn't think of anything else to say.

A lift of the shoulders. Nice, broad shoulders. Although our conversation was limping along, I couldn't help wishing this encounter might have a different conclusion. He really was awfully good-looking….

"Of course," he said immediately. "It's a big deal, to be the consort of the prima. Even from a clan — " He broke off then, as if he'd just realized he was about to stick one of those size-twelve Converse high-tops right in his mouth.

"Even from a piddly little clan like the McAllisters that lives in the middle of nowhere, right?"

I was pretty sure he did. I let it go, though. Kissing a next-to-perfect stranger was hard enough without getting into an argument beforehand. "It's okay," I said. "I know we're not much compared to the de la Pazes. But we like it that way."

Alex nodded. "It is pretty cool up here. I've never been to Jerome before." His dark eyes fastened on mine, and he moved a few steps closer. A new warmth in his expression made an excited little shiver go down my spine, even though I knew this wasn't going to end the way he wanted it to. "I think I could get used to it here."

Another step, and another, and then he was standing right in front of me. He smelled good, too, of some citrusy aftershave or cologne, something fresh and clean.

"Yes," he replied, then reached up and took my face in his hands, fingers warm and strong against my cheeks. He pressed his lips against mine, and…

I'd known that was what would happen, but even so a sharp wave of disappointment washed over me. It didn't matter that he was gorgeous and smelled good and seemed more or less friendly. Whatever it was — whatever that spark was that should flare into a raging fire once a prima kissed her intended consort — well, it just wasn't there. He wasn't the one.

For a second or two he continued to kiss me, as if he thought I was on a delayed-reaction fuse or something. But he could kiss me for the next ten years, and it wouldn't make a speck of difference.

Gently as I could, I pulled away. I didn't say anything at first. Then, "I'm sorry, Alex."

His dark brows pulled down as he frowned, but then he gave a philosophical lift of the shoulders and stepped back a little. "My abuela warned me that this wasn't a sure thing."

"Angela, you're sort of legendary. Forty-three candidates — forty-four now, I guess — and not one suited you?"

"Oh, I know." To my surprise, he bent down and kissed me again, only this time on the cheek. "It's sort of like buying a lottery ticket for us candidates, I guess. We all know the odds aren't very good, but we all hope that we might be the one." He grinned, a flash of white teeth, and said, "Hasta luego, Angela." Then he went out the door that led to the hall, and from there to the front door.

Well, technically, it was the back door, as our house was a two-story apartment above my aunt's store, and so the private entrance was off the alley and not the main street, but still. Either way, he was gone. Adios, number forty-four.

I had no idea who number forty-five was going to be, but I had a feeling he couldn't possibly be as cute as Alex Trujillo.