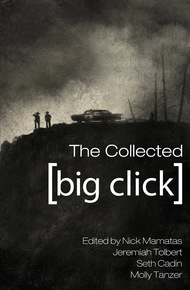 The Big Click was an online magazine of noir fiction, published by Jeremy Tolbert and edited by Nick Mamatas, Molly Tanzer, and Seth Cadin. In its three-year history, it published work by Ken Bruen, Kit Red, Ray Banks, Daphne Gottlieb, Libby Cudmore, and many more of the world's best crime writers.

Spinetingler Award nominee Ken Bruen's "Angel of Hospitality," in which a would-be embezzler chooses the rightest wrongest hotel in Manhattan to use as a safehouse.

"Bluebeard's Ghost" by Ray Banks, which lets us into the mind of a convicted sex offender who discovers that the plans you make in prison don't always work out once you're a free man.

Joe Clifford's "Through the Fish-Eye Lens," a heartwarming tale that asks the hard questions, like is it worse for a kid to have a drug-dealing dad, or a mom who … well, you'll just have to read it to find out.

Gary Philips's "Tobin and Gagarin," a rampaging tale of street brawls and two guys who just can't get enough of one another.

And so much more!

The online magazine that inspired this StoryBundle: for three years Jeremy Tolbert, Molly Tanzer, Seth Cadin, and I worked together to create a bimonthly journal of crime in noir, and in that time we published some of the best and darkest noir fiction around. And we lost a lot of money doing it. So thanks for buying this bundle, and enjoy these thrilling stories and essays! – Nick Mamatas

So I'm thinking of robbing my next door neighbor's house. He's a cop.

By his own admission he's a terrible shot. And he's a jolly cop, with a little paunch and a beaming sweet-guy smile. He's Officer Norman Rockwell who gets cats out of trees. Not an intimidating fucker with a cop mustache and ashen eyes who you know just loves to beat the shit out of cuffed prisoners with telephone books. Combined yellow and white pages, not just those little DEX directories.

He reads comic books, like me. Still subscribes to them even though I can't afford to anymore. I'm envious. I burn with jealousy and greed. He smiles and talks about series titles I can no longer follow. The Avengers, X-Men, Daredevil, Batman. It makes me nostalgic. It makes me think of a time when my father used to read to me. It drives me bugshit. A lot of things do these days.

I'm too fat to be a second-story man. I'm not shinnying up drainpipes or easing into tiny shower windows. But his back sliding glass doors, there's something funky about them. During a barbecue one time his teen daughter accidentally locked everybody outside and the cop just jiggled the pane in its frame until it jumped the track and opened.

There it is. Point of entry.

I know how desperate men think. I'm one of them.

His wife collects silver knick-knacks and tea services. Small lightweight stuff a lazy fatass like me can carry easily in a sack over my shoulder. I can pawn them anyplace. Pawnshops require ID, but I've learned they'll let that kind of thing slide if you just play dumb enough. I can play very dumb. It's not a hard stretch. "My dog ate my wallet." Nobody gives you too much static. Nobody gives you too much money. The only trick, I suspect, is to wear a hat and keep your face hidden from the cameras in the far corners of the shop.

Since he's a bad shot, I'm guessing he doesn't own any guns besides his service pistol. Guns would be where the real money was at. I could sell them on the street to punks of all kinds and really add to the crime rate and downfall of the little town I live in. Everybody else seems to be. Last year a guy dressed as Santa Claus robbed two banks in town. He's never been caught. If you're going to wear a Santa Suit and get away with it, then any asshole can get away with anything. Seriously, it's not even original. Christopher Plummer did it in The Silent Partner. He got shot in the end.

So why have I chosen the cop next door to rob?

Because he's got benefits and insurance. He's got job stability. His house is nicer than mine. He's got central air. I don't have central air. He's got an HDTV and streaming Netflix. I don't think I can climb our fence but I can at least chuck some of his cool shit over into my back yard. Do you think it's time that I reiterate I'm an envious prick? I think it's time.