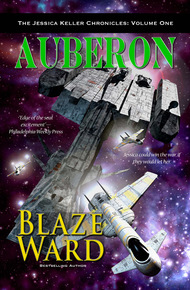 Her actions also prevented a massacre during the latest starship battle between the Republic of Aquitaine Navy (RAN) and the Fribourg Empire.

What does this maverick commander have to do to impress the RAN high command? To get the Fribourg Empire to declare her a threat? And at what cost to herself?

Auberon—the first novel in The Chronicles of Jessica Keller—combines adventuring to distant stars with seat-of-the-pants excitement. A fascinating expansion to the Alexandria Station universe.

Be sure to also read the continuing adventures of Jessica Keller in, "Queen of the Pirates", "Last of the Immortals", "Goddess of War", and "Flight of the Blackbird".

Acclaimed science fiction writer Blaze Ward can write just about anything, and often does. From mystery to high fantasy, his stories grab you and won't let go. But you can tell his true love is for science fiction. And he has this great series of space opera called The Jessica Keller Chronicles. I knew when putting this bundle together that I had to have one of those books. Auberon starts off the series and if you are like the rest of us, you will want to read the entire series. (The second book in the series is set on a moon, but start with this first one.) – Dean Wesley Smith

Jessica waited inside the shuttle's crew bay on Auberon's Flight Deck. Marcelle had already exited with both satchels, leaving her alone in the poorly-lit metal box.

Jessica took a deep breath, glanced down at the scroll of paper she held in one hand, and finished counting to one hundred.

She emerged from the hatch and looked out over the cavernous bay.

Strike Carriers were purpose-built vessels, redesigned up from a heavy cruiser hull. As carriers went, they were considered tiny and cramped. But they still had to be large enough to hold and y three sections of fighters, nine craft, plus the standard three transport shuttles from the cruiser design. In this case, the design had been made even tighter by removing the three shuttles and replacing them with two larger craft, a gunship and an assault shuttle.

Still, it was considered a courtesy to a new commanding officer to be met with an empty flight deck. Jessica had heard stories of carriers where the full wing had been launched in order to leave the entirety of the deck available.

That was extravagance that was normally reserved for Fleet Lords taking command of the big Fleet Carriers, in ceremonies that might last days.

Jessica suppressed a smile as she emerged into the bright lights of her new Flight Deck. Everything had been shifted back into storage cradles to make space, except for one fighter craft that sat to one side, looking as if it was ready to launch. Most of Auberon's officers were lined up across from it, facing it, making an aisle for her to walk down, as if on parade.

So much for the expectation of a cleared deck. The regulations did say clean, but nothing required everything to be packed up and stowed.

Again, within the letter of the regulations, but extremely irregular and possibly bordering on rude.

Jessica had been afraid that three years under a commander she knew to be a sanctimonious and pompous windbag might have damaged the crew's morale.

She was wrong. This was a crew with spirit. She could work with that. They might hate her, but they were all volunteers, and exhibited, even according to Kwok's records, competence that occasionally bordered on excellence.

Jessica stepped down onto the deck and entered the parade aisle they had made for her, radiating grim seriousness.

Inside, she fought not to smile. This crew was looking for a fight with her.

While Jessica was a warrior, she was also a tactician. She began adjusting her plans.

Jessica came to a stop in front of the man at the far end of the line on her right, pivoted, and took a moment to scan him closely. He had two stripes on his arm for a Senior Centurion, and the look of a quietly competent man.

The pictures Marcelle had supplied had not done the man justice. He was average height and average build. Average looking, with red/auburn hair that was stronger than she had expected.

Denis Jež had a record that showed him to be smart but not brilliant. Methodical. Exceptionally competent. He was also, according to the records, a chess player. Jessica could not imagine someone less like her.

But he also had a record of serving under more senior commanders who had a tendency towards political connections. According to the First Lord, Denis had been assigned to make sure Kwok didn't do anything embarrassing.

Jessica assumed he was a babysitter, who was probably quietly distraught that he had not been considered for command. Jessica softened her scowl, watched his own relax. Jež did not have a powerful and important family or patron to advance his career.

But she didn't plan on being out here in the boonies forever. She hoped to find a place for him in her greater schemes.

"Centurion Jež?" she said formally, waiting for him to nod.

She opened the scroll, took a step back, and projected her voice loud enough to be heard by the back ranks.

'By will of the Republic of Aquitaine Navy and First Lord Nils Kasum, the undersigned, Command Centurion Jessica Keller, is hereby ordered to report aboard the RAN Auberon at the earliest opportunity and take command, subject to the normal rules and regulations. She will exercise excellence and demand the same of her crew, that the whole reflect the greatest acclaim in serving the needs of the Republic and the will of the Senate.

Signed on the Date of e Republic June 26, 392 by First Lord Nils Kasum and countersigned October 1, 392 by Jessica Keller.'

Jessica looked up at the crew brie y, watched some of the tension bleed out of Centurion Jež's face, and pulled a pen from a pocket in her tunic. She quickly signed the document, scrolled it, and handed it to her new First Officer.

"I stand relieved," he replied quietly as he took the document. Jessica turned to the other officers before her. This crew tended to be younger than one would expect for a frontier posting, but Kasum had told her that Auberon was the unofficial flagship of the sector, and appeared to be crewed by a higher grade of personnel, competent instead of well-connected.

She allowed herself to smile at them, watching the faces relax somewhat from the apprehension of the unknown.

She fixed Jež with a sharp eye. To his credit, the man did not squirm.

"Jež," she said, loud enough to be heard several rows back. "In one word, what is the status of Auberon for combat operations?"

The man blinked once, a poker player suddenly keeping his cards close to the vest. "Ready."

"Ma'am?" he said, confused enough to break character for the first time. The other officers also began to look less solemn, like perhaps this wasn't going to be an execution, after all. Or maybe it was.

"The correct answer is hungry," she announced loudly. "This is a warship of the Republic of Aquitaine, ladies and gentlemen. We are about to go to war."