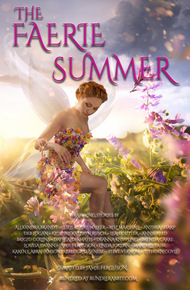 Midwinter Fae is the section volume in the faerie-themed anthology series A Procession of Faeries, which is edited by Jamie Ferguson. Jamie has edited over a dozen anthologies, including both standalone collections, the Ever After Fairy Tales series, and the Amazing Monster Tales series which she co-edits with DeAnna Knippling. She runs Blackbird Publishing, a small, independent press, and is a member of the Uncollected Anthology, an urban and contemporary fantasy author collective. Jamie lives in Colorado, and spends her free time in a futile quest to wear out her two border collies, since she hasn't given in and gotten them their own herd of sheep. Yet.

The summer sun bathes the earth in warmth and light,
Faeries dance under the moon at night.
Cross through the portal into a land ancient, beautiful, and wild.
See the wonders that enticed the stolen child.
Come away, O reader! To the Realm of Faerie.
But if you want to make it back home, you had better be wary…

This collection includes twenty tales of faeries and magic set in our world – and in others.

THE FLAT ABOVE THE WYND by Alexandra Brandt
SILVER DUST by Leslie Claire Walker
UNICORN MAGIC by Roz Marshall
BENEATH THE KNOWE by Anthea Sharp
LEXIE’S CHOICE by Deb Logan
FLOWER FAIRIES by Kristine Kathryn Rusch
PAULALEENA by Leah Cutter
ROLO THE GREAT by Annie Reed
THE FAKE PATH TO TRUE MEMORY by Brigid Collins
PROOF OF DEVOTION by Dayle A. Dermatis
BY DAWN’S BLOODY LIGHT by DeAnna Knippling
ONDINE by Brenda Carre
SNAP A TRAP, INC. by Louisa Swann
THE FAERY’S CHOICE by Jamie Ferguson
THE QUEEN OF MAY by Linda Jordan
SKYWALKERS by Marcelle Dubé
STORMRIDER AND THE LADY OF SOUL by Karen L. Abrahamson
THE BODY PLOT by Rebecca M. Senese
THE WISHING RING OF OLD QUEEN MAAB by Steve Vernon
HAWTHORN & WILLOW by T. Thorn Coyle

The perfect collection for the summer. Great stories about fairie—light, dark, and everything in between. The writers here are many of my favorites, and I suspect they'll be yours once you've finished. You'll find some bylines in common with the Uncollected and Fiction River, because these writers are just that good. – Kristine Kathryn Rusch

Sky glared at the (entirely too long) spiral of chipped red stairs and cursed Ram once more.

Not aloud, mind you, and not with any real intent. Being only half Wyndling meant she wasn't terribly strong in magic, but she'd rather not risk her theoretical cursing becoming a real fairy curse through sheer carelessness. Especially not when her beloved former mentor was enjoying a well-deserved retirement in the Wynd.

But right now, she desperately wished him here by Lady Stairs. Because she wanted his counsel, especially now as she was trying to pick up where he left off. Because she missed Ramsay "Old White" Whitebridge more than her own long-absent father.

And, most importantly, because she really wanted to give Ram a piece of her mind.

He could have had a flat anywhere in Edinburgh's Old Town, as long as there was an active human close or wynd nearby. By the end of his 300-year tenure as Protector of all the Sideways along the Royal Mile, he had a very comfortable living from his long-term investments.

Sky knew this, because it was all hers now.

So, when he could have had any flat he chose, why had he chosen Lady Stairs Close?

Her ire wasn't about the long flight of stairs, not really. Any location along the Royal Mile would have that problem, since there would always be shops below. (Although he could have chosen something other than the very, very top.)

It was just that this spot was so…central.

So full of people. All the time.

People always trying to climb these bloody stairs. Because someone had helpfully labeled them and now the damn tourists thought they were part of the Lady Stairs Close experience. Lovely green James Court, even more picturesque honey-and-smoke-colored Makar's Court, the Writers' Museum…and the red stairs that clearly must be the famed Lady Stairs the close was named for.

Sky liked people. She liked the noise and color and bustle of Old Town, from the nigh-constant drone of the bagpipes to the crack of the street performer's whips to the sidewalks cluttered with displays of tartans and kilts from the dozen wool-and-cashmere shops that populated her block alone. Unlike many of her former (human) coworkers from the banking job, she even liked these late-summer crowds of tourists.

But she didn't like them climbing the stairs to her flat. Every day. All day.

So why here, Ram? Sky would never in a million years try to use Lady Stairs to cross over into the Wynd—it was far too popular, although its popularity certainly gave it more power than some of the other Sideways. And now she would have to be extra careful about her appearance in her own home, with the risk of random folk coming up the stairs…and possibly seeing a silhouette that didn't look…human.

Not to mention the inconvenience right at this very moment, waiting for the most recent tourist—English, she thought—to realize he was blocking the way to her flat. Walloper. No clue he was keeping her from her job, of course.

Which was not to be standing at the foot of the stairs and wishing she was elsewhere.

Her job was to go upstairs, look into the Eye, read a few more pages of the stacks and stacks of notes Ram left her…and then don her amulets and be ready to start her patrol by late afternoon.

Before the dusk and the twilight.

When anything could happen.