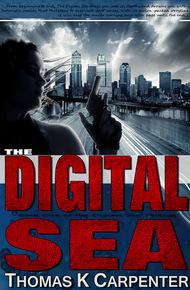 The digital sea is an immersive reality that's always on, seen through eye-screens and controlled by the mind. Zel Aurora, a skilled reality-hacker, can change the digital sea with a thought, but all that power can't cure her daughter's fatal disease, so she makes a deal with a powerful crime lord to save her. This one choice leads to a road of ruin and redemption as sea levels rise and civilization falls. In the end, she can't save the world, but she must learn how to save herself.

Tom Carpenter writes breathless fiction. Action, adventure, excitement seem to be in his writer's DNA. He jumps from subgenre to subgenre with aplomb. The Digital Sea books have been compared to the Matrix and Neuromancer, but they provide a reality all their own—or rather a new reality. Prepare to binge on these. – Kristine Kathryn Rusch

The words of the seller drifted back to her. "Can you use it when you must, little one? When the fear is all up in you like a dirty old man, are you just going to hand it over?"

He hadn't scared her then. But she was never scared out there.

She turned off the screen on the outer layer of her cornea to make sure nothing lurked as she stalked down the street. Her black gloves disappeared, but nothing else. The Digital Sea was thin here. No one cared enough to augment it. Back in the populated part of Belgrade, the change to the people and buildings would have been dramatic. Using the neural actuator sown into her hair, she resumed her access to the Digital Sea back on with a thought.

She passed an outworlder, the grin slapped onto his face while his eyes vacantly absorbed a world only he could see. The bum hadn't even bothered to hide his shabby clothes with digital ones or modify his emaciated form.

He lurched toward her. "Evening Milady. Fancy an evening stroll?"

The stench of his fetid teeth assaulted her. "Go fuck yourself," she said.

"Another time." He tipped his non-existent hat before he stumbled back into the darkness.

The reception she'd given the man hadn't been as cathartic as she'd hoped, because she knew his program would change whatever she'd said to something fitting with his personal reality. If she went back that way afterwards, she'd probably find him talking to a lamp post, thinking it a fellow gentlemen.

Zel cut through an alley to a broken section of the wall and ducked under the twisted metal struts. Two massive stacks jutting into the cloud layer like the legs of a concrete giant came into view. She couldn't see them before because of her proximity to the wall and the ever-present fog that smothered Belgrade daily.

She'd never seen them this close. The view from her apartment faced the wrong way and the visibility in the city barely allowed her to see two streets over. They were dead giants now anyway. Their innards filled with concrete so they couldn't wheeze out their reflective dust, geoengineered to reflect the sun's light.

"Come to get a closer look?" a ragged voice cackled from a pile of boxes.

A man's head popped from the middle of them. "The devil's lungs can't breath no more. So don't you worry about them."

"I wasn't." Zel wanted to move on and find the seller, but she'd forgotten about the stacks and wanted to stay a little longer to gaze upon them. At one time they'd been a symbol of hope.

"We got the bastards that did it too. I was there. Bashed one of their heads in when I caught him. Kept saying he wasn't no engineer. Only a maintenance man. But I learned him when I checked his fingernails. Not a speck of dirt under 'em."

The vagrant cackled again, which broke into a cough.

"Don't worry, young lady. They don't work no longer. Probably been that way since before you been born. They won't belch out their foul dust any longer. Caused more problems than they fixed."

Zel slipped away while the vagrant lectured about how he was making sure no one came back to fix them. He'd bash their heads in just like he did the engineers that made them. But she'd moved on, focused on getting what she needed so she could get back to Liala. Back to what she needed to do.

She found him easily enough. The dealers lived by a dual edged sword—be known enough to sell your product, but not enough to be known by the authorities. His warehouse still stood strong, he'd picked a good spot.

She sensed him inside, then dipped into his system to figure out the layout and the defenses. Breaking in was like walking through smoke. She projected herself inside, startling the seller as he chopped vegetables.

"Gah! Who are you, why do you invade my space? You have no right."

He was a small man with a head full of black salty stubble. He kept his hair and beard shorn close. She knew he was Moroccan from the information she lifted from his ARNet, but that detail was unimportant now.

"You're the seller. I need something from you."

"Back in the maghreb, no one would be so rude. I'm making a delicious tagine. Go away and come back later, little one."

He gave her a disapproving look and dumped some spices into his pot. He made shooing motions at her projection.

"Come by in a few hours when I'm ready. I am hungry. It will take you a while to get here anyway."

"I'm here now," she said as she walked into the room through the kitchen door. Zel dismissed her projection.

The seller eyed the large butcher knife in his hand, then shrugged his shoulders and set it down. No matter how rude she had been he was still a businessman.

"This unexpected intrusion will cost you in your price."

He picked up the pot and set it on the stove. The kitchen was humble enough. Sparsely decorated. Pots and other utensils hung from a cast iron structure in the middle of the ceiling. He saw something completely different. A fake reality drawn over the real one. She'd long ago given up such illusions. The only ones she kept were the ones to protect her and Liala.

She shook her head.

"You're in over your head, little one. You shouldn't play with toys Mommy and Daddy bought you. These are dangerous games you play."

He stared at her, detached. The wrinkle lines around his eyes creased. The vein in his neck throbbed with excitement, and his hands itched. He acted relaxed and in control, but Pandora told her otherwise. She whispered in her ear that he wanted something from behind the spice rack.

She couldn't see these things for herself. People had always been a mystery to her, the downside to her condition. She hated the way the doctors had talked about her as if she wasn't in the room. Zel and her condition. So she had programmed Pandora to read what she couldn't.

"My stew needs more cumin," he said as he moved toward the spice rack.

Her mind reached out, creating a burst of bright lights before his eyes, just to slow him down. The white pattern erupted across his pupils as he threw his hands up. Then she lunged over to the spice rack and reached around it. Her hands slid around cool metal—a pistol that fit in the palm of her hand. A TT-30 Russian model from the previous century, Pandora told her.

"You don't know how to use that, little girl. Hand it over to me," he said.

Pandora sensed his fear, but he kept walking toward her.

A guide popped up, hovering two feet in front of her, showing her where to undo the safety, and how to hold it. The seller stopped when she slipped the safety.

"Are you wanting to buy from me or kill me?" He laughed.

He relaxed. Finally, she was speaking his language.

"I can sell you one, but again, all this sneaking and sorcery nonsense. It will cost you." He grinned, showing brownish teeth.

He was afraid, but he still searched for an angle. He wouldn't have such a nice little home if he didn't squeeze the most out of everything. It was one reason why she had picked him. He had a comfortable enough life not to jeopardize it. Those with nothing to lose were cheaper, but more dangerous. Even this one had its risks. A young girl using mods well beyond her means could attract attention, but at this point he just wanted to make the sale and get rid of her.

He found what she wanted quick enough. It was big and black. It had to do the job the first time. The coldness smothered her as soon as it was in her possession. Zel slipped out as she had come in, leaving the seller with valuable information about his rivals. Not because she liked him. He would have done her in, and in a nasty way if he'd had a chance. She did it so he'd be focused on the next opportunity, and not the sweet little girl that had slipped through his defenses.