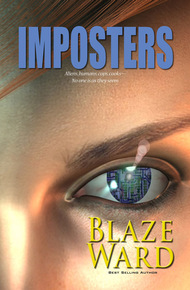 Rick Pine—veteran, ex-convict, and now, chef and part owner of a French bistro—needs a cigarette and about twenty hours of sleep after working all day at the restaurant.

He does not need this cute Japanese-American woman coming into the bistro and asking for him by name. Particularly not returning his coffee mug.

The one he lent the alien. Just before she blasted off in her spaceship.

And he really does not want to know what sort of trouble this woman has gotten herself into. However, like the last time, he has no choice.

Imposters introduces us to Rick Pine and the fascinating universe of The Collective in this fast-paced near-future science fiction novel.

Blaze Ward, one of the top up-and-coming science fiction writers in the field, chips in with Imposters, a griping and fun ride through the fascinating universe of the Collective. Near-future science fiction done as it should be done. This book will give you a great introduction to Blaze's wonderful science fiction novels. – Dean Wesley Smith

Detective Eleanora Hall climbed out of the passenger side of the sedan and looked down the long alley.

A typical Seattle rain fell, just enough to wash away most of the evidence, not enough to actually clean anything up. Great waste of a Friday night. Story of her life.

She pulled up her hood and made sure her badge was visible outside her rain shell, on a cute little necklace her husband had bought her, as she made her way through the small crowd that had gathered on the street.

"What have you got, Kowolski?" Detective Hall said as she stepped up to the police tape the enterprising officer had already hung across the alleyway.

The officer nodded to her and pointed back behind him. "Got a bad one, ma'am," he said. He glanced at his watch. "Shop keeper found him about twenty minutes ago, already cold. Called. I was a few blocks away. Took a look. Haven't done much but block it off and call for help."

Detective Hall felt her partner come up beside her. Detective Henderson Murray was as old school as the department got. She watched him light a cigarette and take a drag as he listened. He liked to listen a lot. Didn't speak until he had mulled it all over for a while. People liked to talk. They usually said too much around him.

She nodded at the officer. "So time of death prior to 2AM?" She waited for him to nod back before she slid under the tape.

It was a good thing she was wearing her practical boots tonight instead of something more dressy. Blood splattered on the walls, the dumpster, the concrete. It dripped from the rain and ran in the gutter.

It was going to be one of those nights.

"That's one from the history books," Detective Murray said with an intrigued voice.

The victim was even worse than the reports had suggested. The body was in at least three major pieces.

"What's your take, Murray?" Detective Hall asked her partner as he squatted down and poked at something with a pen. He was Murray. Never Henderson, or Hend, or anything. Just Murray.

She watched him work for a moment. "Somebody, something, literally tore this poor bastard to pieces," he said, standing. "That's a leg. The other one's over there and, wow…"

Detective Hall followed Detective Murray as he stood and stepped around the dumpster. Whatever it was that had killed the man had decapitated him afterwards and carefully jammed his head onto a rusty iron bar wedged into a manhole cover.

"So much for Pookie," she said to herself.

The neck was torn like a piece of newspaper, rather than chopped cleanly like a knife would do. The head had belonged a young black man.

"Yeah," she replied. "Small time punk. Occasional dealer, part-time pimp, guaranteed to snitch when we caught him. Used to run into him when I worked Central District and Rainier Beach. Wonder what brought him up to Belltown?"

"I'm more interested in what killed him," Detective Murray said, squatting down again to look Pookie in the eye. "That's some serious shit, Hall."

She started taking notes and looking for interesting clues. "How's that, Henderson?" she asked, not really listening.

"You ever kill a chicken, Eleanora?" he looked back over a shoulder at her.

"I'm from Juanita, you silly-ass redneck," she made a face at him. "Would have ruined my nails."

"So, to do the job, you grab a chicken by the head and pull really hard, El," he said. "Comes right off. Heart still pumps for a bit, so you get blood everywhere. Kinda like this."

"So you're telling me," she said with heavy irony, "that somebody ripped his head off? How?"

Murray shrugged. "I have no idea. Couldn't have been a person," he said. "Nobody's that strong."

Hall shrugged back at him. She knew better than to ask where he came up with some of his crazier ideas. "Well, at least he cleaned up the streets a little, killing this piece of shit," she said. "Now if we can just get enough rain to wash it all off."