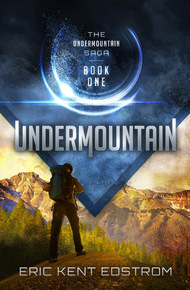 A backcountry hiking expedition in the Canadian Rockies becomes a galaxy-wide adventure for six troubled teens.

On the sixth day of the hike, fifteen-year-old Danny Michaelson and his friends encounter a creature of legend. Bigfoot. And when the mysterious creature lures the hikers to a hidden underground city, they become embroiled in an alien civil war that puts more than their own survival at stake.

Undermountain is the first book in the YA adventure series The Undermountain Saga. Science fiction and fantasy fans adore Eric Kent Edstrom's enthralling and thought provoking tale about an entire world coming of age.

Eric Kent Edstrom changes up the pace some with Undermountain, a YA adventure about aliens roaming right here on this planet and how an entire world must come of age. An enthralling and thought-provoking read that will make you want to get more of his books. – Dean Wesley Smith

An inhuman shriek, high and piercing, drifted to Harvin McTavish's ears. It came from somewhere north of them.

An answering cry followed a moment later, this one from the south.

It confirmed what Harvin already knew. They were being hunted.

Harvin swiped a calloused hand across his face and glanced at the sun. It stood high above the mountains to the west, an angry ball of orange in a pure blue sky. Even this deep into summer snow still capped the highest peaks in white.

The kids were struggling now. He'd pushed them hard to get to this far, but he hadn't told them about the danger. The last thing he needed was a group of city kids panicking fifty miles from civilization.

Kids. Teenagers, actually. Six of them in this outing, all from the States. Not a bad group. All of them were in desperate need of fresh air, exercise, and ten days away from their damn screens.

Kids. He let out a slight laugh. Harvin couldn't think of anyone under 40 as anything but a kid. This bunch was all fifteen through eighteen. And they were strung out on the path behind Harvin, bent forward under the weight of their backpacks.

Six days of back country hiking had sucked the sass right out of them. It made for quieter days, which Harvin would have enjoyed under different circumstances. As an expedition guide for teenagers, he'd certainly heard more than his share of mindless chatter.

But now their stillness worried him.

They were being hunted. And when the time came for them to run, he worried they wouldn't have anything left in the tank.

"Come on, Bronson," Harvin shouted to a straggler. "You can breathe when you get to the top of this rise."

Harvin didn't wait to see if the kid started walking again before marching forward. He kept his eyes on the path. This section had grown rocky, the footing unsure. If he fell . . .