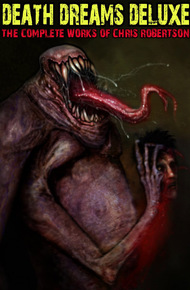 Chris Robertson is the editor of the series Demonic Visions 50 Tales of Horror. He wrote and directed the feature length film “Disposal of a Corpse”, and has had his speculative fiction published in Monomyth Magazine, Doorways Magazine, and various anthologies.

Death Dreams Deluxe includes every piece of horror and science fiction that I wrote from 2005-2013. Many people believe horror to be an inferior genre, but not I. Horror done well is really just drama taken to a higher, more primal level. The ideas for the stories in this book came from many sources: dreams and nightmares, waking fears, homages to my favorite films and books, imagination, and in one instance a voice heard telepathically during a night of insomnia.

"Some of these stories are creepy enough to literally make your skin crawl! Keep your phone next to you with your safety person favorited, because you'll need someone to bring some light back into the room where you're reading this. Bound to zero in on at least one of your phobias and twist the knife a little harder..." – The Dead Redhead

William stood and stepped into his clothes, and took his hat before exiting the cottage. There awaiting his emergence were David, Paul, and Edward, each holding their tools for the day.

"Good morning William," said David somewhat strangely, to which William did not reply.

"It is time to harvest the wheat," said Paul, with the same empty tone as his companion.

"Get out of my way," said William as he looked amongst his tools for the hammer.

"Your scythe awaits you," said Edward. His voice was as empty as the other’s.

"I choose the hammer," said William with a voice of defiance. "What have you done with it?"

The three men did not answer him, and began to enclose him with their stance. Then with malice in there steps, they began to descend upon him. The wall of his cottage cornered him, and he turned to reenter the door. A small sound then came into the air, as the bolt was set into place from the interior of the dwelling.

"Augustine, it is me!" he called. "Augustine, open the door!" But his wife would not reply. He knew then that she had been entranced a second time that night prior, and had engaged physically with the beast of stone. He turned to face the villagers as they bore down upon him, each wielding their scythes in their hands.