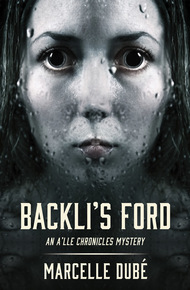 Marcelle Dubé writes speculative fiction and mysteries. In Backli's Ford, she combines her two loves to create a fascinating alternative history with strong characters, an unusual situation and an alien species stranded on Earth. Dubé's novels include the Mendenhall Mystery series as well as fantasy, science fiction and suspense novels. She lives in the Yukon, where people still outnumber the carnivores, but not by much. Learn more about her and her other published work at www.marcellemdube.com.

In the early 1700s, an A'lle generation ship crashed in the woods of Lower Canada. Survivors stumbled out of the wreckage to find French settlers working the land. While many of the colonists sheltered the injured A'lle, some reacted with fear and loathing. Two centuries later, nothing much has changed.

This is the world Constance A'lle, first A'lle investigator for Lower Canada, must deal with when she investigates the beating death of an A'lle boy in the small village of Backli's Ford.

Set in 1911, Backli's Ford follows Constance as she survives an ambush that would have killed a human, fights prejudice in the constabulary, and discovers a terrible secret that risks destroying the delicate balance that has endured for two centuries between A'lle and humans.

Marcelle Dube's Backli's Ford brings mystery into science fiction in a perfect blend. An alien ship crashes in Canada in the early 1700s and the alien survivors must find a balance between their culture and the humans they are forced to live among.

Marcelle's novel might be the purest of all the novels talking about the aliens among us core of science fiction. Historical science fiction with some stunning writing, this book will grip you from the start, and when you are finished you will search for more A'lle Chronicles, I promise you. – Dean Wesley Smith

She shivered and tried to sit up, but her body refused to move, as if a great weight pressed down on her. She lay on her side, her left arm trapped beneath her body, her cheek pressed against something cold and wet. She strained to part her eyelids but could see nothing past the stabbing daylight.

She was lying in snow.

With a grunt, she managed to bring her free hand up to her face and felt a rough scratchiness on her cheek. Wool. She was wearing a woolen mitten.

She reached out a cupped hand and brought snow up to her eyes and scrubbed. The snow burned but she kept rubbing until whatever glued her eyelids shut finally gave way and she opened her eyes to dazzling brightness.

She blinked away the reflexive tears to see snow heaped in front of her nose and beyond that, a tree trunk.

By her constant shivering, she could tell she had been lying in the snow for a long time. Her A'lle genes had protected her so far but she had to get up now or she would die.

She pushed herself into a half-sitting position. The arm that had been trapped beneath her protested with pins and needles as it swung free and she stared down at it numbly, wondering why it hurt so much.

She reached inside her coat — a sheepskin coat, wet and weighted with warmth — and fished under a sweater until she felt flesh. And hissed when she encountered the hard knob of her shoulder out of its socket.

The realization called up a searing throb of agony that lanced through her shoulder and chest, and down her arm. She gasped, fighting the darkness that threatened to rob her of consciousness again.

Clutching her left arm close to her body, she struggled to her knees, then, slowly, to her feet. The world swam for a moment and she took deep breaths, willing herself to remain upright. When the darkness receded, she took stock of herself.

Her body ached with bruises. Those she could ignore. Besides the gut-wrenching pain in her shoulder, she felt as if every other joint in her body had been pulled free and inexpertly reset. Her feet, even inside the sheepskin-lined riding boots, were blocks of ice. But worst of all was the blinding pain in her head, made worse by the glare of fading daylight off the snow.

Using her teeth, she tugged her mitten off and tucked it between two buttons before exploring her bare head. Through the thick, shoulder-length hair she felt a lump on the back of her head that was big as her fist. She gingerly poked it but the bone beneath seemed intact and there was no broken skin.

The lump above her temple was a different story. Though smaller, it sported a deep gash that had crusted over. The hair around the gash was matted with dried blood. She barely touched it, for fear it would start bleeding again.

At last she looked down. The snow was packed tight where her body heat had melted it. In spots, the snow was tinged pink with diluted blood. Her stomach heaved and she quickly looked away.

Tall trees loomed in front of her, still dark and sleepy from winter. Black spruce, willow, aspen, a few pines. Together they formed a forbidding wall that cast long blue shadows in the fading light. It should still be morning… shouldn't it?

She glanced at her body's imprint again, bothered. Where were her boot prints? She studied the disturbed snow all around her body's outline. The snow showed no boot prints. No hoof prints. No carriage sled tracks.

Slowly, she turned to look behind her. A cliff reared at her back, at least sixty feet tall. Its face sloped slightly outward as it reached for the ground and it was covered with snow and brush. A path of broken bushes and disturbed snow gave mute testimony as to how she had arrived at the bottom without leaving boot prints.

She stared up at the cliff, trying to understand. Where was her horse? She'd had a horse, hadn't she?

She couldn't remember falling, but that was a blessing. If not for the bushes and thick snow that had broken her fall, she likely would have died. Her A'lle constitution couldn't protect her from a broken neck.

But even as she thought it, she found herself studying the cliff's edge anxiously, expectantly. Without consciously deciding to, she began moving toward the trees, toward shelter. Someone had been up there, had pushed her off.

Whoever it was would be coming to make sure she was dead.