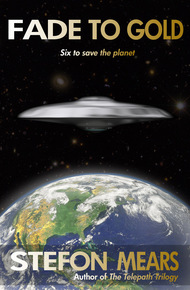 Stefon Mears has published more than twenty books to date, including the Cavan Oltblood series (epic fantasy), the Ars Portlandia series (urban fantasy), and the Rise of Magic series (space fantasy). Stefon earned his M.F.A. in Creative Writing from N.I.L.A., and his B.A. in Religious Studies (double emphasis in Ritual and Mythology) from U.C. Berkeley.

Fade to Gold by Stefon Mears

Aliens land in midtown Manhattan. They claim to seek out planets on the verge of deep space travel and prepare them to join the galactic community.

For Charlie Evans – the star blogger known as Evansessence – the alien arrival means canceling his big job interview. Because the aliens will help Earth only if a panel of six humans can pass their tests. A panel of five international celebrities … and Charlie.

And the worst dilemmas facing Charlie don't come from the tests.

Fans of alien contact stories and SyFy's Childhood's End will want to read Fade to Gold, a science fiction novel of choices and consequences, where the future of the human race relies not on our science or our industry, but our humanity. From Stefon Mears, author of The Telepathy Trilogy.

In Stefon Mears' Fade to Gold, the aliens have landed in midtown Manhattan. Maybe one of the best alien contact stories I have read in a long time, this ranks right up there with the classics like Childhood's End by Clarke. The future of the human race relies not only on our science, but on our humanity. And after all, isn't that what great alien stories are all about? Humanity. – Dean Wesley Smith

The trucker blared his tuba of a horn again, and this time Charlie Evans gave the jerk a one-finger salute over his right shoulder.

Charlie knew his compact Garfield Caravel sedan wasn't exactly the fastest car on the road. In fact, it wasn't the latest and greatest anything. Not even when it was new, which was three owners and twelve years ago. Not to mention some two hundred twenty thousand miles.

The Caravel smelled like old French fries with a hint of cough syrup, the latter a side effect of Charlie's record two-month cold last year. The air conditioner would have been fine, if Charlie could afford to get it recharged so that it blew actual cold air instead of recycling the August morning wind, which was warm enough at this early hour to warn of a scorcher by the afternoon. And the car's exterior was an armada of parking lot dents and dings on a sea of hazard-cone orange that Charlie's most recent ex-girlfriend, Lucy, had dubbed a violation of the Geneva Convention.

But the smart cruise control worked just fine, and it would keep Charlie moving up One-Oh-One through the heart of Silicon Valley at a generous eight miles per hour above the speed limit. Or at least as close to that speed as the traffic allowed in lane three.

If that wasn't fast enough for the trucker, the jerk was more than welcome to go around.

And Charlie had set his cruise control and kept one ear open for the instructions from his GPS so he wouldn't have to waste precious firing synapses on his speed or directions or obnoxious truck drivers. Charlie wanted all his faculties focused on the reason he was on the road right now, and not tucked away in his San Jose apartment — his upcoming interview with Frenzy, "the ultimate search utility for all your devices."

After two years of post-college freelancing scramble — ten years freelancing total if you counted high school work — Charlie wanted, needed, to find out what it was like to have vacation time. Sick leave. A 401K.

So Charlie had a red folder full of ideas on the faded tan cloth of the front passenger seat, and he imagined the questions interviewers would ask, the answers he could give that would make him sound confident without veering into arrogant.

And most of all, not desperate, which was closer to the truth than he wanted to admit. Which was why it wasn't just the August heat making Charlie sweat into his nicest work-casual red polo shirt and tan cargo pants, and dampening his short, curly brown hair.

Frenzy was a company that everyone used, but many people loved to hate. They had plenty of market share for their main products — the search utility, of course, but also their streaming video and audio, and their social media tool — but a growing segment of their base was either trying to develop alternative tools or actively supporting anyone else's tools out of frustration with the company's public image.

Charlie had good ideas how to go about changing that public image.

Charlie had great ideas. In that folder next to him sat a mock-up for a potential online campaign to improve Fenzy's image with checkpoints at two weeks, two months, six months and a year. Not a complete reinvention, of course, but a one-eighty on their current direction and progress toward making them seem the kind of company people would want to see succeed. The kind they'd trust again.

Charlie knew what size team he'd need, what sort of budget it would take to do it right. He had spent more time and effort on preparing for this interview than he had on anything else in the last six weeks.

Which was part of the reason Lucy was an ex-girlfriend. She could handle dating the professional social media wizard known to the world as "Evansessence." She seemed to rather enjoy it at first, even if Charlie only barely eked out a subsistence living here in one of the most expensive regions of the United States. Probably didn't hurt that he overhauled and idiot-proofed her cosmetics website.

But a professional social media wizard who was spending less and less time with her?

Charlie couldn't really blame her for leaving. Though he tried. At least, in the privacy of his own head. Over beers with his friends he admitted the truth. Charlie Evans spent too much time on the computer trying to earn a living, and not enough time actually living.

When the trucker leaned on his horn long enough to pull Charlie out of his thoughts, Charlie realized he was being passed on both sides. That wasn't right.

Worse, his speedometer read forty miles per hour and dropping.

Charlie stepped on the accelerator. Nothing happened, except that cold fear washed down his body, tightened his bladder. And his sweat kicked up a notch.

The trucker went around now, that tuba horn of his still holding its note while the trucker screamed obscenities and returned Charlie's salute.

But the engine was on. The light on the push-button ignition was green. The oil gauge read in the safe range. The digital readouts on the GPS were all…

All at once, every idiot light on Charlie's dashboard started flashing. The GPS went black.

Charlie gritted his teeth and flipped on the turn signal with his left hand and steered right with his right.

Or rather, he tried to.

The power steering was dead. All the idiot lights kept flashing. Lots more horns and drivers screaming at Charlie. Cars in the right hand lane swerving as he yanked the wheel with both hands now, desperate to get off the freeway before…

The Caravel died, there in the slow lane of highway One-Oh-One. Momentum kept it rolling off the freeway, but the dashboard was dead, the accelerator useless.

But there wasn't a lot of room on the shoulder. Ten more feet of asphalt. Two feet of dirt. Then a tan cinder block soundproofing wall that loomed very solid.

Charlie slammed down the brake pedal. Squeezed his eyes closed.

The power brakes were dead too.

Slamming into the wall jarred Charlie's gritted teeth. His airbag failed to deploy. He jerked forward against the seatbelt.

Then slumped back against his seat. Very much alive. Uninjured apart from a kink in his neck and a sore jaw, thanks to the fact that the car hadn't had much speed left when it hit the wall.

Charlie sighed once, hard, then once more, slowly. He opened his eyes. His folder was on the car floor, his papers scattered. Some of them would probably be greasy, and the way his luck was running, that would include his résumé.

Cars whizzed past on the freeway behind him, mockingly fast and operational.

Charlie forced another slow, deep breath. He unplugged his phone, which was no longer charging there on the dashboard anyway. In less than a minute with his flicking finger he accomplished three important things.

First, he checked the local social media ride-sharing apps. No one could get a car to him in less than a half hour. No luck there. Second, he checked the prices of the local taxi services — all of them were urgency-sensitive these days, which meant they cost too much for him. So, third, he hit the distress button on the app for his roadside assistance service, which submitted his GPS coordinates and got him in the queue for a tow.

Charlie dropped his head forward and thumped it on the wide center of his steering wheel with its stupid, un-deployed airbag.

Which, when he thought about it, was probably a small blessing in disguise. He wasn't going fast enough to need it, and now he didn't have to pay to repack it.

Charlie sighed again and looked at his phone. He had six friends who all worked within range to pick him up and get him to that interview on time. But the operative word there was "worked." His friends were coders and tech writers. They couldn't just take off whenever they wanted to.

Well, maybe Jimbo could. He was the star programmer at a small company that made games for mobile devices. If Jimbo wanted to get away for half an hour, they would probably ask if a full hour would help.

"Are you watching the news?"

"Turn on the news. Pronto."

"Fuck the news! I have to get to this interview."

"Fuck your interview. Aliens have landed in New York!"