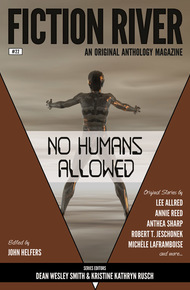 John Helfers is an author and editor currently living in Green Bay, Wisconsin. During his sixteen years working at Tekno Books, he edited more than fifteen short fiction anthologies for DAW, as well as numerous ones for other publishers in all genres. He's worked with bestselling authors and co-editors such as Lawrence Block, Charlaine Harris, John Jakes, Anne Perry, Jeffery Deaver, Mercedes Lackey, Margaret Weis, and Kevin J. Anderson. The Vorkosigan Companion, a guide to the SF world of Lois McMaster Bujold co-edited with Lillian Stewart Carl, was nominated for the 2009 Hugo Award in the Best Related Book category. He also edited the Shadowrun™ anthology Spells & Chrome, which won the 2011 Origins Award for Best Related Book. Besides his Fiction River anthology, he's currently working on several other editorial projects through his editorial and consulting company, Stonehenge Art & Word.

Humans prove great fodder for fiction. But what about the universe of possibilities offered by the nonhuman protagonist? The eighteen daring humans of Fiction River's latest volume explore just that. From a goblin who must choose whether to risk everything for love to a heroic rat adventuring at sea to sentient underpants (yes, underpants), these nonhuman tales demonstrate why Adventures Fantastic says: "If you haven't checked out Fiction River yet, you should. There's something for everyone."

Table of Contents
“In the Beginnings” by Annie Reed
“At His Heels a Stone” by Lee Allred
“In the Empire of Underpants” by Robert T. Jeschonek
“The Sound of Salvation” by Leslie Claire Walker
“Goblin in Love” by Anthea Sharp
“Slime and Crime” by Michèle Laframboise
“Always Listening” by Louisa Swann
“Here I Will Dance” by Stefon Mears
“Rats at Sea” by Brenda Carre
“Sense and Sentientability” by Lisa Silverthorne
“When a Good Fox Goes to War” by Kim May
“The Game of Time” by Felicia Fredlund
“The Scent of Murder” by Angela Penrose
“Still-Waking Sleep” by Dayle A. Dermatis
“Inhabiting Sweetie” by Dale Hartley Emery
“The Legend of Anlahn” by Eric Kent Edstrom
“Sheath Hopes” by Thea Hutcheson
“We, The Ocean” by Alexandra Brandt

Now in one of the real treats of the bundle, eighteen writers in Fiction River: No Humans Allowed have written science fiction short stories that will keep you reading. The book offers what seems like an entire universe of nonhuman protagonists and top writing and storytelling. – Dean Wesley Smith

One of my favorite volumes of Fiction River is Recycled Pulp, edited by the redoubtable John Helfers. In that volume, John took a group of stellar unrelated stories and somehow managed to create a single whole. I cannot tell you what a feat of editing that was.

I didn't think John could do such a thing again. And I certainly didn't think an anthology titled No Humans Allowed would come close to comparing with the amazing Recycled Pulp.

I should have trusted not only John, but the cadre of writers who form the core of Fiction River's family. Given an assignment to write stories from a nonhuman point of view, these writers stepped up and created some of the best stories I've read in years.

While I love all of the stories in No Humans Allowed (and that's saying something in and of itself), I do have my favorites. Lisa Silverthorne's "Sense and Sentientability" takes on Jane Austen in a wholly original way. Brenda Carre writes an entire sea adventure worthy of Patrick O'Brien, but the narrator of our tale (tail?) is a heroic rat. And Anthea Sharp always manages to touch my heart with her fiction, and "Goblin in Love" is no exception.

However, much as I love those stories, I think at least two of the stories in this volume are classics—the kind of stories anyone who reads them will remember forever.

The first, from the fertile mind of one of the most original writers of our time, Robert T. Jeschonek, is called—aptly, I might add—"In the Empire of Underpants."

The second comes from a brand-new writer, Alexandra Brandt, whose story, "We, The Ocean," is inventive, heartbreaking, and wholly original.

I can say no more about either story without ruining them for you. I can say that what you'll find in No Humans Allowed are incredible stories that will surprise, shock, and entertain you.

No Humans Allowed isn't quite the editing feat that Recycled Pulp was. After all, these stories have a theme to unite them. But that theme provided some of the best stories we've seen at Fiction River since Recycled Pulp. And considering the high quality of the fiction we buy around here, that's saying something amazing indeed.