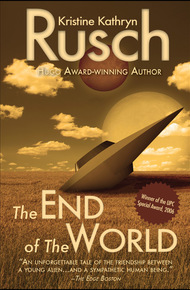 The End of the World by Kristine Kathryn Rusch

Small-town detective Becca Keller must struggle with her own demons when her ex-husband calls her to help with a mass grave unearthed at the site of his resort-restoration project in the Oregon desert. Her investigation unearths more questions than answers—about the bones and about the past.

Winner of the UPC Special Award, The End of The World explores the complexities and range of the human condition.

The End of the World won the UPC Special Science Fiction Award, Europe's top science fiction award. The story explores the complexities and range of human conditions when faced with real aliens as only Kristine Kathryn Rusch can do. – Dean Wesley Smith

The air reeked of smoke.

The people ran, and the others chased them.

She kept tripping. Momma pulled her forward, but Momma's hand was slippery. Her hand slid out, and she fell, sprawling on the wooden sidewalk.

Momma reached for her, but the crowd swept Momma forward.

All she saw was Momma's face, panicked, her hands, grasping, and then Momma was gone.

Everyone ran around her, over her, on her. She put her hands over her head and cringed, curling herself into a little ball.

She made herself change color. Brown-gray like the sidewalk, with black lines running up and down.

Dress hems skimmed over her. Boots brushed her. Heels pinched the skin on her arms.

No spikes, Momma always said. No spikes or they'll know.

So she held her breath, hoping the spikes wouldn't break through her skin because she was so scared, and her side hurt where someone's boot hit it, and the wooden sidewalk bounced as more and more people ran past her.

Finally, she started squinching, like Daddy taught her before he left.

Slide, he said. A little bit at a time. Slide. Squinch onto whatever surface you're on and cling.

It was hard to squinch without spikes, but she did, her head tucked in her belly, her hair trailing to one side. More boots stomped on it, pulling it, but she bit her lower lip so that she wouldn't have to think about the pain.

She was almost to the bank door when the sidewalk stopped shaking. No one ran by her. She was alone.

She flattened herself against the brick and shuddered. Her skin smelled of chewing tobacco, spit and beer from the saloon next door.

She had shut down her ears, but she finally rotated them outward. Men were shouting, women yelling. There was pounding and screaming and a high-pitched noise she didn't like.

But she couldn't move.

She was shivering, and she didn't know what to do.