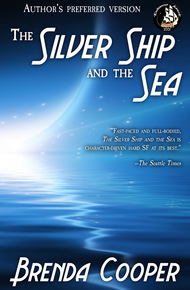 Brenda Cooper is the author of nine science fiction and fantasy books. Her most recent novels are Wilders (Pyr, 2017), POST (Espec Books, 2016), and Spear of Light (Pyr, 2016). Her other works include Edge of Dark (Pyr, 2015), The Creative Fire (Pyr, 2012), and The Diamond Deep (Pyr, 2013) as well as the Fremont's Children series and Building Harlequin's Moon, with Larry Niven (Tor, 2005). Her most recent short fiction includes "The Hand on the Cradle" (Humanity 2.0, 2016), "Iron Pegasus," (Mission Tomorrow, 2015), "Biology at the End of the World" (Asimov's, August 2015), and "Elephant Angels" (Heiroglyph, 2014). Brenda blogs frequently on environmental and futurist topics, and her non-fiction has appeared in Slate and Crosscut. She is the winner of the 2007 and 2016 Endeavor Awards for "a distinguished science fiction or fantasy book written by a Pacific Northwest author or authors." Her work has also been nominated for the Phillip K. Dick and Canopus awards. A technology professional, Brenda is the Chief Information Officer for the City of Kirkland, which is a Seattle suburb. Brenda was educated at California State University, Fullerton, where she earned a BA in Management Information Systems. She is also pursuing an MFA at StoneCoast, a program of the University of Southern Maine. Brenda lives in Bellevue, Washington with her family and three dogs.

The Silver Ship and the Sea by Brenda Cooper

Prisoners of a war they were barely alive for … Fremont's Children must find their way in a world that abhors their very nature, or discover a way to leave it … In her award-winning novel, The Silver Ship and the Sea, kickoff to the Fremont's Children series, Brenda Cooper explores what it means to be so different that others feel they must oppress you. Six human but genetically enhanced children are stranded on the colony planet Fremont by a war between genetic purists and those that would tinker with the code. Orphaned by that war, the only remains of the children's heritage are an old woman like themselves who was left for near dead at the end of the war, and a mysterious silver ship that appears to have no doors. To preserve themselves the children must leave the safety of the insular community and brave the wilds of Fremont, beautiful but dangerous. An echo of their own natures, or a proving ground of their genetic worth? In this battle of wills and principles, what does the future hold for Fremont's Children?

From the story of Chelo Lee, dated July 17, year 222, Fremont Standard, as brought to the Academy of New WorldHistorians

Fremont was discovered in the year zero. Zero always begins the marking of a new planet's time, as if it did not exist before humans found it.

My story did not begin until after year zero, but I should tell you about discovery. About zero. Zero is full of infinite possibilities. Five bright metallic probes swooped in from Inhabited Space, circled a wild planet, and then, one by one, plunged to the surface. Three landed in oceans, reporting salt and brine and signs of life. One disappeared entirely, possibly swallowed by the molten Fire River that issues from the mouth of the volcano Blaze, the hot soul of the continent Islandia. The fifth probe landed in Green Valley, where we live today. It reported that humans could breathe the air and that carbon-based life existed abundantly on Fremont.

They parked Traveler in orbit, taking seven small planet-hoppers to the surface, shuttling up and down for months with people and supplies. Being careful. Even so, Fremont's predators began killing them even before they all made it to the surface. For Fremont was joyous, riotous, very alive, and very wild. The probes mapped a moment in time: a snapshot, not a movie. If more had found our valleys, had found the two livable continents (Islandia and Jini), had found the wide grass plains, the colonists might have been better prepared.

Fremont rumbles and moves and shifts. Its blood flows across the surface in red-orange rivers and slides into its waters, sending steam hissing and spewing to honor the marriage of water and fire. Fremont's grasses and plants and animals are sharp-edged and sharp-toothed. Edible, but only once their defenses are breached.

After a full hundred years, Fremont hosted only fifteen hundred people, now third and fourth and fifth generation, ragged and hungry and tired. Two hundred wanderers, called roamers, traveled the continent of Jini. Twice a year, they returned to Fremont's one city, Artistos, nestled between the Lace Forest and the Grass Plains. The roamers planted and tended a continental network of information feeds, which they used to document the beauty and danger of Fremont. They fought to gain the knowledge and experience needed for the colony to survive. Everyone else lived in Artistos, behind fences.

The colonists' stubborn clutch on the values that drove their flight from Deerfly made Fremont even harder. They claimed true humanity, refused to be augmented, to improve their physical nature to better match the wild things thatsurrounded them.

Two surprises landed on the Grass Plains in the year 200, ships bearing my parents and others like them. New Making andJourney were nimble enough to land on the empty concrete pads, Artistos's spaceport, searing the ground around them black and bending the yellow-green whip grass flat. They bore a mere three hundred people, but three hundred altered. Modified for intelligence, for strength, for quickness, for long life. My early education on Fremont taught me they were evil, but they were my own people.

We now call what happened the Altered War, or the Ten Years War, and hope that no one else comes to make another one. Most say it started over scarce food supplies, or over demands from the altered that the original humans follow their footsteps. Others whisper that it started over bad advice given intentionally to the newcomers.

I don't care. I do not know why it became war. Why couldn't we all live here? After all, we believe both Jini and Islandia are habitable, even though no human lives on Islandia yet. But never mind, for that fact matters later, but not now.

However it began, in the end fewer than a hundred altered survived. They fled Fremont, taking the Journey. Half of the first colonists died. One altered had been left behind: Jenna—blind in one eye, one arm lost, but fast as a paw-cat. Jenna ran, climbed, hunted, and outfoxed everyone who tried to kill her.

And us. The only altered, as far as we know, born onFremont.

There are six of us; children of the dead. We were adopted, mostly separated. Alicia and Liam, both three years old, went to two groups of roamers, while four of us stayed in town. My brother and I remained together, adopted by Artistos's leaders, Therese and Steven, as a sign of the end of the war. Kayleen went to the popular, and barren, biologist, Paloma. Bryan became part of a large household in the builder's guild. I was five at the time and Joseph two. Kayleen and Bryan were both four. So I was the oldest, the one who had to keep us alive.

My new mother, Therese, once told me the altered designed our unique talents for Fremont. The words she used were, "They made you for this place." My first parents must have been made for Fremont as well, but made for the snapshot the probe sent back, not for the real place.

We did not grow up in time to do whatever they madeus for.

They are, of course, gone, or dead. Their ship, the New Making, stands upright where it landed. The ground surrounding the ship is still mostly bare and black in a circle as wide as the ship is tall. Wider than twenty of us lying down. It reminds us of our heritage. It remains locked, inaccessible.

The Altered War ended twelve years ago. The first colonists returned to an enemy that had harried their flank, and in some ways had become their ally, as they fought the altered. They returned to the struggle to survive Fremont.

I barely remember my first parents. They floated in and out of our lives like smoke, coming to our tents late at night, exhausted, then leaving again at daybreak. I do remember Chiaro, one of the last altered to be killed. She raised us, and she was our teacher. To this day, although the pain has shrunk to a small stone in my belly, I miss Chiaro. Therese told me once that Chiaro saved us, bartered her own life for the six of us, claiming that we would someday be helpful.

Therese and Steven treat me well enough, and I respect them. At first, they were our captors more than our parents. It was only when we became old enough to work alongside them, old enough to begin learning our abilities, how to offer them carefully and subtly, that they began to treat us with respect and, perhaps, as family. My brother Joseph loves them, I think. He has no memory of our first parents. He has little memory of the first few years we lived in Artistos. He does not recall being watched carefully, as if he would turn and bite the hands that brought him breakfast. He does not remember the time before Artistos began to appreciate our abilities, to begrudgingly allow us to participate in the life of the colony.

And why not appreciate us?

I am very strong, and think well about spatial relationships, about trajectories, about trends, about interactions between people. Those skills let me become quietly important, useful without being easily noticed. Joseph, like me, has no external physical enhancements, although he, too, is strong and fast with keen senses.

His extraordinary gift is built deep inside him. He absorbs and synthesizes and directs data, balancing multiple streams in his brain, accepting many inputs, seeing multiple current moments, and correlating information. He is so earnest in his desire to please that most love him. Again, I ask why not?

We all need each other to survive.