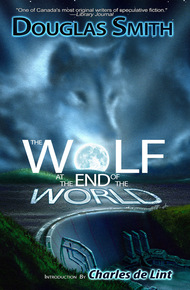 PART I: "Draw to You the Wolf and Boy"

"Of old, men were placed here on Earth by the Powers in this wise: they were pitied and befriended by every kind of thing, by as many things as are seen, and by things that are invisible. They dreamt of every kind of thing. Even the animals taught them things. That is why the old-time people had Manitou power."

What had she been thinking? Why had she gone along with Jimmy and the rest of them? She was an A-student. She was going to university in the fall. She had plans, plans to get off the Rez. Plans that didn't include jail.

Hanging a banner over the dam protesting the loss of Ojibwa land was one thing, but then somebody had poured gasoline on one of the construction vehicles and lit it on fire. And she'd let herself be part of it.

Just because Jimmy had a cute smile and cuter butt—a butt that was getting farther and farther ahead of her as she struggled to keep up. She was a bookworm, not an athlete, and the ground was starting to rise. Jimmy was heading for the west ridge overlooking the still inoperative dam site and its reservoir lake. She didn't know where the other kids had gone. Everyone had scattered when the guards had appeared, and she'd followed Jimmy. Or tried to.

The tall Jack pines stood closer here, the undergrowth thick between them, their high tops touching, blocking off the cold light from the waxing half moon. Whatever path Jimmy had taken was invisible, hidden by darkness.

She swore softly to herself. Her dream, too. She stood up, her anger conquering her fear. They wouldnot catch her. Sucking in a deep breath, she let it out slowly to calm herself as she looked back down the hill she'd just climbed.

The dam and its dark captured lake lay in the distance below. Five burly figures were climbing the bottom of the hill. But worse, ahead of the guards, two grey shadows leapt over the rocks and brush of the slope. The dogs would reach her in less than a minute.

The barking stopped. In the sudden silence, she heard the yip of a fox. She shuddered involuntarily, remembering a saying of her misoomish, her grandfather. "Bad luck," he'd told her as a child. "You hear a fox bark in the night, that's bad luck." But then the dogs took up their call again, and she allowed herself a small thrill of hope. The barking was fainter now. The dogs, and presumably the men with them, were moving away from her. They hadn't found this path.

She was going to get away. The tension gripping her vanished, and her shaking legs gave way. She collapsed onto the soft cushion of pine needles that covered the ground. Sweat soaking her t-shirt under her parka, she hugged her knees to her chest, shivering from the chill and the adrenaline still in her.

Now that the immediate danger was gone, another thought came to her. Just last week, a worker had been killed at the dam site. Animal attack, they were saying. Because his body had been partially eaten, she recalled with a shudder.

A brightness grew ahead. A few seconds later, she stepped into a clearing lit in cold luminescence by the half moon above. A rocky outcrop rose ahead and to her left as well. She turned to her right. Her heart fell.

She stood at the top of the ridge. Below, the ground sloped away sharply, the pines thinning halfway down the slope then disappearing completely where the forest had been cleared near the bottom. The slope ended at the road leading onto the top of the dam. Beyond the dam, the black surface of the lake rippled like some great beast shuddering itself awake in the night.

She'd been running the wrong way, back towards the dam.

With a sudden sick feeling, she realized what she should have figured out earlier. The dogs would have followed a scent. They hadn't followed her, so they must have been on Jimmy's trail, which meant that Jimmy had taken another path, not the one that had led her here.

She looked wildly around the clearing, searching for some alternative to retracing her steps. The slope below led right back to the dam and the scene of the crime, so that route was out. The dark lake caught her attention again, recalling childhood memories of her grandfather's stories, the ones about the evil spirits that lived in deep water.

She turned her back on the lake and those memories. Enough. Time to go home. She considered the rock walls. The one facing the entrance to the path was almost sheer and rose too high for her even to think of trying to scale it. The wall facing the lake was less steep and offered some handholds for climbing.

It looked about twenty feet high. She examined its face for the best route, finally selecting a path that would bring her up beside a large boulder that perched by itself at the top of the wall.

Another gust brought a smell down to her, thick and heavy—the smell of mushrooms and rotting wood and wet moss. Bitter, and yet so sickly sweet that she thought she would vomit.