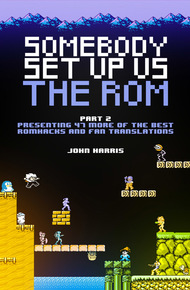 John Harris has been bumping around the internet for over 20 years. In addition to writing the columns @Play and Pixel Journeys for GameSetWatch and writing several Game Design Essentials columns for Gamasutra, he's an active member of the web community Metafilter, where he writes about all kinds of crazy things. He's spoken at Roguelike Cellebration. Current projects include a cave exploration game using cellular automation and a weird kind of world simulator. John Harris has a MA in English Literature from Georgia Southern University.