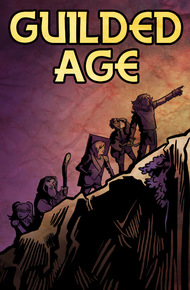 An ex-stage actor and failed Internet shut-in, T Campbell has written eighteen gazintillion pages of comics, won some awards and gotten high-flying writers to praise his work, so if you don't love this series, it's probably your own damn fault. He spends his "spare time" designing crosswords, drafting health care bills and seeking the Anti-Life Equation.

While other children played in the sun and dreamed of becoming astronauts, a young Erica Henderson sat alone in her room reading Zot and drawing Jughead. In the years since… not much has changed. Through anti-social behavior and an obsessive need to keep doodling, her first published piece debuted when she was fourteen. Since then she has dabbled in a few other projects- the most notable being illustrations for Baby's First Mythos and animation for Infinite Frontier, until she found stardom re-inventing Marvel's own Unbeatable Squirrel Girl with Ryan North.

A longtime Professional Neckbeard, Phil Kahn has spent a few years writing for various Webcomic, Webcomic Criticism, and Webcomic Enthusiast sites, and is now trying to take his accumulated knowledge and put it all to good use on Guilded Age. While building a daytime career as an IT Support Specialist and Pokémon Trainer, he also spends a great deal of time practicing silly voices/faces in front of a mirror for the inevitable day where the only thing that can save the whole of humanity from certain doom is his impression of Henchman #24.

Out of the three creators, he is also totally that Gnome Warlock who just won't DIE ALREADY.

When pirates kidnapped the children of the Heads of Houses, the aristocratic families that govern Gastonia, the Heads hired a handful of adventurers to rescue them. Impressed by the adventurers' performance, the Heads kept them around as a special team of "Peace-Makers."

While often sent on diplomatic and reconnaissance missions, as well as some criminal investigations, the adventurers were recruited for their muscle, and are fully aware that such missions can, and often do, turn violent. While some of the Peace-Makers view Gastonia's policies with a jaundiced eye, all are aware that the Savage Races represent a far greater threat to peace and freedom.

Elsewhere, on Earth, there's a man. He's CEO of a major corporation, yet he lives like a hermit. He labors night and day on what seems to be a virtual world, but which he insists has a reality all its own. He claims that he has bridged the gulf between Earth and another realm, that he has successfully interwoven computation and sorcery. He is correct. And his plans have profound and disturbing implications for Gastonia and the Peace-Keepers.

Then again, the Savage Races may just kill them all before it becomes an issue. Silver lining!

Written by duo Phil Khan and T Campbell, and drawn by John Waltrip, Guilded Age is a humorous take on the High Fantasy genre. In this exciting dramady a political conflict lurks in the shadows and that threatens to tear Arkerra apart. – Simon Watts