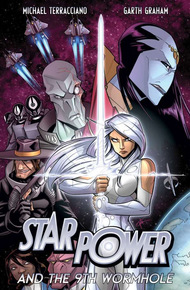 Michael Terracciano loves comic books, superheroes, outer space, and telling stories. His friends call him "Mookie." He spent the last ten years as the author and artist of the fantasy webcomic, "Dominic Deegan: Oracle for Hire." He enjoys spending time with his wife and their three cats. His favorite planet is Jupiter because it's awesome. He wants having superpowers to be fun again, and for this to be a universe you want to escape to, not from. He hopes you enjoy reading Star Power.

Born in Known Space, raised by the likes of Lazarus Long, Dr. Susan Calvin, and Lt. Miles Vorkosigan, Garth Graham has only ever partially shared the same reality as most of us. Fascinated by what might be and what isn't, rather than weighed down by the drama of what is, he has forged a tenuous bridge made of ink and paper between our world and some strange unknowable scape where improbable dreams are born. Perhaps it has driven him a little mad. Yet such madness has born fine delectable fruit for our eye organs. His previous works include the webcomics Comedity and Finder's Keepers. In his spare time Garth likes to laugh maniacally about the abstract and fictional concept of "spare time" and does his level best to refute entropy.

In the far future, a young astronomer on a distant space station is chosen to wield the Star Power. Now, as the last of the Star Powered Sentinels, she must protect and explore a galaxy far more dangerous and wondrous than she could have ever imagined.

Danica Maris is chosen to wield the incredible Star Power, forcing her to become a space faring superheroine who stands against the dangers of the 9th Wormhole. Michael Terracciano and Garth Graham's Star Power is a beautifully illustrated and exciting comic that feels incredibly fresh in a medium dominated by superheroes. – Simon Watts