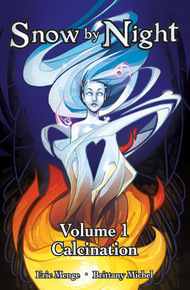 Eric Menge: Eric Menge is an author, editor, game-designer, and intermittent attorney. He has designed Dungeons & Dragons adventures, written articles, and acted as a campaign administrator for Wizards of the Coast. Most recently, he co-authored Menzoberranzan: City of Intrigue, an award-nominated RPG supplement. He has served as a telecommunications attorney for the U.S. Small Business Administration and then in private practice where he represented wireless telecom companies and broadcasters.

Eric lives in Virginia with his linguistic wife Amy and his daughter who is doing her best to ruin his productivity through sheer cuteness. He is currently creating an online graphic novel Snow by Night, a tale of colonial fantasy and dreams of muskets, alchemy, and snow in the moonlight.

Brittany graduated in 2008 with a Masters degree in Sequential Art from the Savannah College of Art and Design. She grew up in Northern Virginia and enjoys beaches, walking on them, and poking washed up jelly fish with sticks. On weekends in the fall she's usually dressed as a pirate and running amuck at the Maryland Renaissance Festival. Any time she might have left over is taken up by sculpting, mythology, and making costumes and jewelry. She is currently pursuing a career in voice acting in Atlanta.

Snow by Night by Eric Menge and Brittany Michel

Snow by Night is the story of a winter spirit on a quest to find her heart, though she doesn't quite understand what that means. Her quest does not go as she hoped, and she is drawn into the cares of the mortal world. The story is set in a fantasy version of colonial North America on a frontier where cultures, empires, and spiritualties collide. It's a time of enlightenment, a period of transition, and an age of discovery.

Snow by Night is an online graphic novel, written by Eric Menge and illustrated by Brittany Michel. Muskets and alchemy replace swords and sorcery in this tale of colonial fantasy.

Snow by Night tells the tale of a winter spirit's quest to find her heart in a colonial fantasy world, a setting wonderfully brought to life by Writer Eric Menge and Artist Brittney Michel. Eric's knowledge and love of American history and myth is etched into every page of this meticulously researched comic. – Simon Watts