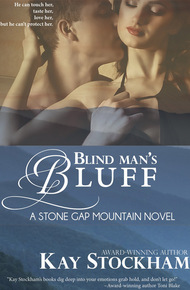 Kay Stockham always wanted to be a writer, ever since the age of seven or eight when she copied the pictures out of a Charlie Brown book and rewrote the story because she didn’t like the plot. Through the years her stories have changed but one characteristic stayed true— they were all romances. Each and every one of her manuscripts included a love story.

Published in 2005 with Harlequin Enterprises, Kay’s first release hit #7 on the series bestseller list. Kay has also been a HOLT Medallion, Book Buyers Best, RT Top Pick, and RITA Award nominee who has contracted fourteen books with Harlequin, and a novella with Berkley Publishing. Look for her most recent Stone Gap Mountain series with Kindred Spirits Publishing.

For more information regarding her work, please visit Kay’s website at www.kaystockham.com.

Can you love someone and still be free?

Emma Wyatt agrees to tutor a recently blinded, embittered soldier because of the $50,000 paycheck his brother offers. Blind herself, Emma dreams of independence and freedom away from her overprotective family. But when she’s attracted to her student, she fears falling for him means giving up her dreams.

Can you protect someone who you cannot see?

Good soldiers show no weakness. Ian MacGregor holds his battle with claustrophobia close to his chest, unsuccessfully trying to cope on his own. He’s lost in the dark and struggling to accept his fate. Ian knows duty, honor, serving his country. Ian’s desire for Emma is overshadowed by the danger lurking around them. Emma would be better off with someone else. Someone sighted.

Someone able to protect her from the person determined to keep them apart.

I know RITA-finalist Kay Stockham only slightly. We’ve met a few times in passing, but she was recommended by friends so I set off to read her story. By the second page, I knew she had to be included in our bundle: a bitter, sightless war veteran and a sightless woman who was determined to discover joy. They now find each other and all of the answers they were looking for. A powerful entry into her now complete “Stone Gap Mountain” series. – M.L. Buchman

“Doc, you know I meant what I said, right? I’ll do anything for you and Rose. I’ll get you specialists, hire nurses, domestic help, send you on the trip of a lifetime—but I can’t hire your niece.”

Duncan looked at the woman again and shook his head. Ian would eat her alive. “Doc, Ian’s not himself. This isn’t the job for someone as young as her.”

“She’s twenty-eight, your age or thereabouts, if I remember correctly.”

She looked younger. “Fine. Someone as soft as she appears.”

“You’re being judgmental, Duncan. Shame on you.”

Shame on him? Maybe it was the way her hair was pulled back from her face and how the length hung midway down her back, but he couldn’t imagine pitting her against a former Navy SEAL as lethal as Ian. What was Dibbs thinking? “Doc, it’s obvious you love your niece and think a lot of her abilities, but she wouldn’t last a day.”

“You’re looking at the outside, but you’re not seeing her strength. And you gave me your word, Duncan. I’m holding you to it.”

“Doc, Ian’s drinking, flying into rages. No,” he said with a firm shake of his head. “For your sake and Rose’s, I’m not hiring your niece.”

Duncan straightened when he spotted Emma making her way over to them.

“Here’s your Coke,” she said, setting the glass on the table. “Uncle Bruce, my shift is over, but I’ll be around for a few more minutes. Let me know if you need anything else, okay?”

“Emma, can you spare a moment? I’d like you to meet Duncan MacGregor. Duncan, my niece, Emma.”

“Nice to meet you, Duncan,” she said.

The entry door opened and lit up the interior of the bar.

“Emma! How’s my favorite bartender, eh, sweetheart?” an older man called out. “We’re celebrating George’s paper getting published. Set us up with eight longnecks, would you?”

“Sounds like a party, Professor Jackson. I’ll be right with you.” Turning back to their table, Emma smiled. “Patty is just coming on the clock so I need to help her out.”

“Come back and sit with us for a few minutes when you’re done. Duncan and I have been talking about a job opportunity you might be interested in. It pays well,” Dibbs added with a pointed smile at Duncan.

“Oh, really? That sounds intriguing. I’m sure I can spare a few minutes while my ride home finishes her dinner.”

“Doc,” Duncan warned as she walked away, not wanting to be put on the spot or made to feel bad the man wasn’t getting the seriousness of Ian’s behavior.

His gaze strayed to Emma as she headed back to the bar. Despite her words about needing to lend a hand, she trailed her fingertips along the tables and chairs, hesitating every so often to chat with customers.

Duncan shrugged. “Like I said, it’s a bad idea. If she needs a job, I’ll ask around and see what I can do, but I’m pretty out of touch with things here. As far as Ian is concerned, what I really need is another you, Doc. Don’t you know another shrink? My brother needs someone to—”

“To show him life goes on after being blinded,” the doc insisted. “Duncan, Emma is proof of that very thing.”

“What do you mean?” For the first time since Duncan had sat down at the booth, he saw Doc’s eyes take on their former sparkle.

“You didn’t even notice, did you?”

“Notice what?” Duncan felt like he wasn’t getting a joke when the man out and out laughed at him.

“Duncan, there is a reason I’m recommending Emma for the job—she’s blind, too.”

Duncan swung his head to the right, searching until he spotted Emma as she repositioned herself behind the bar.

No way. How had he missed that?

Emma laughed at something one of the newcomers said to her as she retrieved a tray and began the process of filling the order for the longnecks. That done, she replenished mugs, distributed pretzels and peanuts, and chatted up the customers. She even mixed a drink, her fingertips sliding over the varying bottle shapes until she found the right ones, like the way she’d trailed her fingers over the tables and chairs as she’d crossed the floor. To the unknowing observer, the gesture had looked innocent, casual. Even playful.

But despite the ready smile she wore for her customers, he now noticed other things. No matter how relaxed she seemed, there was an intensity about her, a quiet concentration as she focused on and performed her tasks.

Emma maintained contact with the bar or machines at all times, whether with her hands or her body, sliding her hip against the edge of the counter while she carried drinks to her customers or tracing her movements by the placement of the items behind the bar.