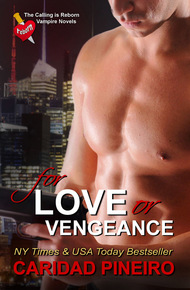 Caridad Pineiro is a transplanted Long Island girl who has fallen in love with the Jersey Shore. When Caridad isn't taking long strolls along the boardwalk, she's also a NY Times and USA Today bestselling author with over a million romance novels sold worldwide. Caridad is passionate about writing and helping others explore and develop their skills as writers. She is a founding member of the Liberty States Fiction Writers and has presented workshops at the RT Book Club Convention, Romance Writers of America National Conference as well as various writing organizations throughout the country. You can connect with Caridad at www.caridad.com.

For Love or Vengeance by Caridad Pineiro

What’s a goddess to do when her job is to mete out justice? FBI Agent Helene Alexander is Nemesis, the Goddess of Vengeance and she has a job to do or her days on Earth as a goddess may come to an end. To accomplish her mission, she has lived with a ends-justify-the-means attitude for centuries. That is until her new partner Miguel Sanchez has her wondering what it would be like to be more human for a change and not be burdened with her special powers and obligations. FBI Agent Miguel Sanchez watched an innocent bystander get caught in a deadly crossfire and so he knows what can happen if his partner should get careless with her quest for justice. He cannot tolerate her harsh ways and brash attitude, but it’s hard to ignore that beneath his partner’s hard façade is someone with great pain and unusual abilities. When the dangerous “Broadway Butcher” serial killer strikes again, Helene and Miguel are pulled into an investigation that will force them to face their greatest fears and their beliefs about finding justice for the killer’s victims. In a battle for life and death, Helene will have to choose between exacting justice or losing her powers in order to save the life of the most honorable human she has ever met.

I've been reading Caridad Pineiro's books before ebooks were a Thing. I was scrolling through her backlist just before writing this, trying to remember which book I read first. I think it was one of the South Beach Chicas books, but I'm not sure. I do know that I was really annoyed at Caridad at one point in my reading career because she got me to read about vampires, which I must say, takes a lot of work.

Caridad has sold over a million books worldwide in all kinds of genres and subgenres. Some of her work combines magic and the FBI, which automatically makes it eligible for a StoryBundle like this one. So I jumped at inviting her.

I have no idea how many books this New York Times bestseller has written, but there are more than I can count. So after you finish For Love or Vengeance, you'll have a lot of good reading ahead of you. I envy you the journey. I remember it well… – Kristine Kathryn Rusch

The chase was on once again.

Nemesis sensed her father's growing anger as he sought her out along the halls of Olympus. She had just returned from another mission down on Earth with the humans, her goals twofold. First: to make sure justice was served so that the puny mortals would not fall into chaos and disorder. Second, and possibly more important to her on a personal level: avoiding her father's rutting ways.

It had been nearly a month since he had taken her, brutally and against her will. Not that it bothered him that he had hurt her, physically and mentally. For that matter, it didn't seem to bother her mother or any of the other denizens of Olympus, none of whom were bold enough to challenge Zeus.

As Nemesis raced into the furthest wing of the palace nestled amongst the clouds, Zeus's bellow shook the walls and the ground beneath her bare feet.

To the humans below the sound would seem like thunder, but to the other gods and goddesses lingering about the palace, it instilled fear since they understood such a mood always brought punishment.

Nemesis sped to her room as quickly as she could, wanting to escape back to Earth before Zeus could lay his hands on her once more.

As she opened the door to her chamber, she realized she was too late. Zeus was already there, lying across the center of her bed, his head of golden curls pillowed against his muscled arms. At first glance he seemed the picture of contentment, but when she met his gaze, thunderbolts of fury lit his celestial blue eyes.

"You've been ignoring me, daughter," he said, swinging his legs over the edge of the bed and slowly rising to his towering height. His presence was immense as the force of his energies buffeted her psyche.

She ducked her head, wishing she could disappear into herself. "I've been spreading justice as you've commanded, Father."

Zeus laughed and the sound rumbled throughout the palace.

A second later her mother, Hera, flew into the room and came to stand beside her.

"Husband, is something wrong?" her mother asked, the tones of her voice demure since she, too, sensed Zeus's growing rage.

"Our daughter avoids me. She claims it is because she is on my mission—"

"I am," Nemesis insisted, raising her head to meet her father's stormy gaze.

"Silence," he commanded, and clapped his hands, the noise almost deafening. It shook the clouds beneath their feet and was followed by a bolt of lightning that burst from his palms.

Both she and her mother lowered their heads once more, and with a satisfied huff, Zeus strolled over and circled, inspecting them.

"You say you are on my mission?"

"I am, Father," Nemesis repeated softly, hating the sense of powerlessness his presence brought.

"Justice must be very important to you," he said as he tucked his thumb under her chin and urged her head upward.

His gaze bored into her, making her quake with fear that he would come to know the real reason for her determination to be on Earth.

"You enjoy your time with the mortals?" he questioned, arching a brow.

"I spend time with them to do what I must," she responded, her voice as neutral as she could make it.

"Methinks that is not the only reason, Nemesis." Obvious displeasure colored his words as he shifted his hand to cradle her jaw and leaned close. "Methinks it is to avoid me, Daughter."

As if to prove his point, he brought his face near until he nuzzled the skin of her cheek. In low tones, he whispered, "You will not refuse me. I will have you whenever I want."

Abruptly he pulled away, shooting daggers at her and her mother, who had remained impassive beside her. He paced a step or two before facing them once more. "If keeping the humans in line is so important—"

"Silence," he commanded again. "Then you will have no issue with taking a solemn vow to exact justice on Earth."

With a dip of her head, she answered, "Justice is my sole mission."

"Our daughter has fulfilled your word admirably, Husband," Hera said, slipping an arm around Nemesis's shoulders in a rare sign of support.

Zeus narrowed his eyes as he considered them.

Hera did her best to appear subservient, but she knew he could sense the disobedience hidden beneath her calm surface, as well as her daughter's. He would brook no such disobedience.

She suspected punishment would not be long in coming.

Leaning close to their daughter, he said, "As part of your vow, you must understand that if you fail, your time on Earth as a goddess will come to an end."

Nemesis bowed her head. "I understand."

"No! Wait, Daughter," Hera cried, but it was too late.

With a blast of lightning, Nemesis was gone from her side, returned to Earth to fulfill the vow she had just made. A vow she had not completely understood in her haste to be away from her father.

"You do not play fair, Husband. She did not comprehend the true terms of her pledge," Hera chastised, but Zeus only shook his head and laughed, the sound of it like thunder across the sky.

"Fair? All is fair in love and war," he answered, and with a clap of his hands, disappeared.

Her body trembling with fear and disgust, Hera stumbled to her daughter's bed and sat. Pressing a hand to the pain in the middle of her chest, she prayed Nemesis could keep her vow.

Justice must be served or else Nemesis would forever be condemned to life as a mortal, with all its inherent dreariness.

But worse, with the promise of death.