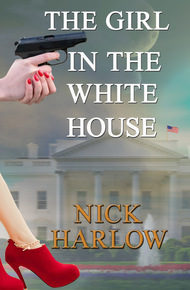 The Girl in the White House by Nick Harlow

When the White House is taken over by terrorists, the country's policy of not negotiating with them is put to the test. Especially since the President's seventeen-year-old daughter is one of the hostages the terrorists are threatening to kill while the world watches. But Sydney Donovan isn't a typical young adult. She and a group of teens she was leading on a White House bunker tour gain control of the underground facility.

A while back I happened to watch Die Hard and Red Dawn back to back… and thought it would be fun to combine the two. The result is The Girl in the White House with the President's teenage daughter trying to save her father and the country from terrorists. Yippie-ki-yay. – Nick Harlow

Six days before the Presidential election

Just about every high level political official in Washington, DC considered Sydney Donovan to be a royal pain in the ass.

The President's daughter considered it a compliment.

After living for nearly four years in the White House, the tall, broad-shouldered redhead had become a walking encyclopedia of politics, having pestered every single member of her father's cabinet and staff with non-stop questions. The seventeen-year-old First Daughter's emerald green eyes clicked over to high beams and her constellation of freckles caught fire whenever she picked up any tidbit of information on the inner workings of the country, her insatiable 160 IQ basically a sponge.

One that preferred to soak up life experience rather than regurgitate facts from a book.

She had taken home schooling to a new level, earning a veritable PhD in things like foreign affairs, military strategy and homeland security, her "teachers" members of her father's cabinet. Her trips to the shooting range with the Secret Service and martial arts classes with the FBI were simply extra credit that had turned her into a buffed tower of muscle. And in her spare time, Sydney studied the languages of the country's enemies.

Because you never know when any of that stuff will come in handy.

As for more traditional subjects, her mastery of math and science took little effort, her only challenge the minefield of what made the Nation's Capital tick.

And after her mother's sudden death two years ago, it became an obsession.

The only child of a widowed President had stepped into the ceremonial role usually held by the First Lady, and the country ate it up. The media couldn't get enough of a telegenic, whip-smart teenager with the brain of a spunky forty year old who often made ribbon cuttings and charity fundraisers must-see-TV by adding spot-on political comments usually reserved for senior members of Congress. Commentators speculated she'd return to the Oval Office in about thirty years.

But on a day the country was on the brink of war, she wanted to be doing anything but giving a VIP tour of the White House bunker, even if it was, in her opinion, the coolest place in Washington.

Sydney power-walked to her mother's old office, long legs eating up huge chunks of hallway, her copper tangles dusting the shoulders of her royal blue jacket with every step. She smiled at the Secret Service agent next to the door. "Morning, Agent Brooks."

"Good morning, Miss Donovan." Suddenly the fortyish agent with the olive complexion and eyes to match stepped in front of her. "Quick question… our computer is down and I need to confirm your schedule. Do you still have the two tours of the bunker today?"

She rolled her eyes. "Unfortunately. First one at eleven o'clock. I'll be taking some of the spoiled brats of parents who donated to my father's campaign along with some other kids of important people. We all have a cross to bear, Agent Brooks."

The muscular agent with the black wavy hair chuckled a bit. "Do you remember who's on the tour?"

She furrowed her brow, wondering why he would care since she did regular behind-the-scenes White House tours for friends of the President and all guests were routinely cleared far in advance by the Secret Service. Then again, Brooks was newly assigned to the White House and was probably just being overly careful. No one on the President's detail ever wanted to make a mistake. "Not everyone. Like I said, some kids of those with deep pockets, an intern, a Senate relative." She couldn't help but smile at the thought of one other guest in particular. The only one who would make the tour palatable. "And Speaker Rusch's son Scott."

"Is the Speaker's kid on the first tour or the second?"

The smile got a little bigger as her eyebrows did a little jump. "He's on the first tour."

"Thanks. You have a good day, young lady."

"You too. Be careful out there."

"I would if I were going anywhere today." He raised his wrist to his mouth and spoke into the microphone tucked into his sleeve as she walked past. "Brooks here. Confirm Spitfire will be leading bunker tour, first one at eleven hundred hours, second at thirteen hundred. Spawn of Loudmouth included on guest list for first tour."

Sydney couldn't help but laugh at the Secret Service code name for Speaker of the House Sterling Rusch, who really did have a tendency to yell having never figured out that microphones actually work. She loved her own code name, an obvious reference to her hair color.

Though she liked to think it may as well have referred to her personality.

She opened the door to her mother's large office, the aroma of fresh flowers filling her lungs as she found administrative assistant Gladys Haines on the phone. The sixty-year-old slender gatekeeper pulled a pencil from her gray hair, made a few notes, then ended the call with her usual, "Yeah, tawk laytuh," in her wicked Brooklyn accent. She looked up at Sydney, studying her face with dark eyes as she held out her hand. "Homework assignment, young lady?"

"Yes, Miss Haines." Sydney stood up straight and handed her the paperwork in order to satisfy the local home schooling requirements which kept her out of the social hell known as high school.

Gladys immediately slid the sheets into a file, knowing the assignments didn't remotely challenge the student. She pointed at the old-school desk blotter she used instead of a computer. "Youse gotta bunkah tour at eleven."

"Yes, ma'am." While technically Gladys worked for Sydney, she had acted as a strict Aunt since the death of the First Lady. Sydney was smart enough to realize she needed an adult in the room with her father gone so often, and actually enjoyed the structure Gladys provided. She could have easily called her by her first name, but wanted to show respect to the woman who had taken her under her wing. Her mother had adored Gladys, and she was beginning to feel the same way.

"Yestuhday I noted a certain Democratic progeny is on the list for the early tour." She shot a little smile at Sydney.

Sydney's face flushed a bit. "Oh, uh, who would that be? I forgot who's coming."

Gladys raised one eyebrow as she always did when anyone tried to sneak one by her. "Oh, gimme a break. Just be careful, young lady. He's a cute little thing. Boys who look like that are dangerous. I oughta know. Been married to one for thirty-six years."

"Yeah, but I've got my eye on a guy who works in the kitchen. You'd like him. The one with the motorcycle and all the tattoos. He's taking me out for dinner at a hot dog cart and then we're going for his-and-hers body piercings."

"Smartass. But I will admit the young man who has captured your interest of late has a lot of good qualities."

"I've known that since I met him in fourth grade."

"I realize that, but now you see him in a different light, yes? I've seen the way you look at him. And the way he looks at you. Like I said, he's dangerous."

"Can we please change the subject?" Sydney glanced at the framed portrait of her mother on the wall, then moved around the desk, leaned down and gave the woman a hug. "I'm glad you look after me, Miss Haines."

"Hell, somebody has to when your father isn't here. Can't have the Spitfire running wild around the White House." Suddenly Gladys turned serious. She cocked her head at the door and lowered her voice. "Honey, close the door. I need to talk to you for a minute and the hallway has ears."

"Sure." Sydney moved back to the door, closed it, and sat in front of the desk. "What's up? You look worried. Everything okay?"

"I'm fine. But watch what you say around that new agent."

"Why, what's wrong with Brooks? He seems okay."

Gladys shook her head. "I dunno. I gotta sixth sense about things. Something's up with him. I overheard a conversation he had with another agent. Pretty critical of your father. And his handling of the current situation with the Russians. Most new agents are smart enough to keep their political views to themselves."