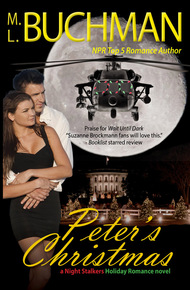 They met at the United Nations, two people from different worlds.

Peter Matthews is D.C. born and bred. Since the tragic death of his wife two years before, he has become the most eligible bachelor on the planet.

Genny Beauchamp is a French-Vietnamese beauty, with an intelligence that dazzles Peter.

Little do they know that not only their hearts, but their very lives will be on the line this Christmas season.

My “Night Stalkers” series is based on the real-life US Army Night Stalkers, the guys who flew the helicopters into bin Laden’s compound, among hundreds of other missions. The series has been consistently chosen as Top 10 and Top 5 romances of the year. Here I journey to the lighter side to take the US President—who lost his wife back in book 1, The Night Is Mine—and have fun showing him the meaning of true love, even if he has to risk his life to find it. – M.L. Buchman

It was December first and Kim-Ly Geneviève Beauchamp of Vietnam stood not twenty paces from the base of the American National Christmas Tree on Washington, D.C.'s Ellipse. The slight fluttering of snow was captured in the streetlights of the park, enchanting for the news cameras, making the scene glitter like a fairyland. Her breath made small white clouds that softened the night even more.

She had come to the lighting of the tree every year that her UNESCO job placed her in D.C. or even New York at the right time of year. Something about this moment—the colors, the children filled with wonder, the spectacular music, the President's message—had always filled her with a hope and a joy. It reminded her of so many good things in the world. She also attended the lighting of the New York tree in Rockefeller Center whenever she could. Though her tropical blood was never thick enough to convince her to join in ice skating with the holiday crowds who made it look so fun.

"Tu es un Christmas sap absolu, Genny," her mother often accused her with a gentle smile; their family language a crazy mix of French heritage and Vietnamese homeland, overlaid with the ubiquitous English. And her mother was absolutely correct. She was.

But this year was different. Genny wasn't shoulder to shoulder with mothers and children and small business owners and twenty thousand others who had braved the cold and dark of a D.C. winter night. She wasn't blocked from a clear view of the tree by the fifty reporters, their cameras, and their lights.

This year she stood close beside cabinet members, White House staffers, and soon, the United States President and his phalanx of Secret Service guards who would be arriving at the podium for the lighting of the tree.

"At the President's personal invitation," a Secret Service agent standing beside her whispered back in response.

"Oh sorry," she turned to face the female agent who looked neat and dangerous in her suit and long overcoat, with the telltale coil of wire leading up to her ear mostly hidden by dark hair. "I was actually speaking to myself. I do that."

"No worries, ma'am," the agent didn't look the least put out or the least worried that she might have offended. "Always takes a bit of getting used to, your first trip to the White House."

Of course, the Secret Service would know that about her. She wondered what else the agent knew about her life now that Genny was the President's personal guest to the tree lighting ceremony. Did the woman know that five months earlier Genny had practically hijacked a meeting at the U.N. to convince the President to pay more attention to the UNESCO World Heritage Sites in Southeast Asia? That had been one of her most audacious acts, irritating the Vietnamese, Laotian, and Cambodian U.N. ambassadors in the process. Or that she'd since dodged three invitations to the White House prior to this one?

The towering tree was still unlit. A U.S. Marine Corps Band was playing Good King Wenceslas. And who would follow in this good President's steps through the winter that seemed to chill the news headlines? She shook off the thought as being unworthy of a Christmas moment.