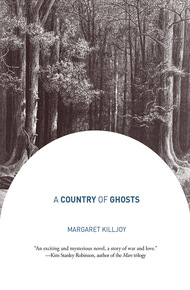 Margaret Killjoy is a transfeminine author and editor currently living on a land project in the Appalachian mountains. Her most recent books are the Danielle Cain novellas, published by Tor.com. Her work primarily deals with themes of power and anarchism, as well as gender, social transformation, and people living itinerant or criminal lifestyles. Margaret spends her time making crafts and complaining about authoritarian power structures and she blogs at birdsbeforethestorm.net.

A Country of Ghosts by Margaret Killjoy

Dimos Horacki is a Borolian journalist and a cynical patriot, his muckraking days behind him. But when his newspaper ships him to the front, he's embedded in the Imperial Army and the reality of colonial expansion is laid bare before him.

His adventures take him from villages and homesteads to the great refugee city of Hronople, built of glass, steel, and stone, all the while a war rages around him. The empire fights for coal and iron, but the anarchists of Hron fight for their way of life.

From the editor of Mythmakers & Lawbreakers: Anarchist Writers on Fiction and author of What Lies Beneath the Clock Tower comes a seditious novel of utopia besieged, a novel that challenges every premise of contemporary society.

"The Man Beneath the Top Hat" is what I thought I was going to call the series, back when the editors of the Borol Review first assigned it to me. Forty, maybe fifty column inches a week for six months on Dolan Wilder, "the man who conquered Vorronia." Dolan Wilder, the enigmatic young upstart of His Majesty's Imperial Army, famous for his bold, ride-at-the-front-of-the-charge style. The man who put more square miles under the gold-and-green than anyone had in a century.

I was all set to write about his rough-shaven face, his black locks, his fine taste in brandy, and the soft touch he had for granting quarter to conquered foes. I was told at least two column inches were reserved for his gruff-but-friendly tone. I was to write about a cold, stony man who nursed a tender heart that beat only for service, only for the King, only for the glory of the Borolian Empire.

Instead, though, I saw him die. But no matter, that—he bore few of those traits I'd been told to ascribe to him, and bore none of them well. Instead I write to you of Sorros Ralm, a simple militiaman, and of the country of Hron. And it seems you won't find my report in the Review.

For a writer of my adventurous temperament and immodest ambition, it was a dream assignment. I can't tell you I wasn't elated when Mr. Sabon, my editor, called me into his smokey office and told me I'd been sent to the front, to be embedded in Wilder's honor guard.

"I understand," I replied, because I did. My middling place in the stable of writers had been made clear to me near-daily since my demotion.

"I know you like to tell the truth," he continued. "You're an honest man. And that's fine—we're an honest paper. But I don't want you stirring anything up just for the sake of stirring it up."

"I mean it. Look me in the eye and tell me all that's behind you."

"Good," he said. "Because this is an important assignment, real important. You do this, and everyone in this city is going to know your name."

That much, at least, was true.

I walked out of his office with my head held as high as my spirits, floated down the stairs, and returned to my desk in the pool of hacks. I put on my bowler and coat and walked out of that building and onto the streets of Borol, the low winter sun failing as always to bring even a hint of warmth through the chill fog that rolled off the bay and stunk of industry.

I took more mind of the city that day than most, knowing I was soon to depart. I was off to the savage wilds, to the very edge of empire and civilization, to leave behind the comforts and sanity of His Majesty's capital city. Not ten feet from the door, I tripped over an urchin girl passed out from hunger or vice.

I know most of my readers will be well-acquainted with the conditions of the working and middle class of Borol, so I won't linger too long on the details of that walk, but I hope you will indulge me a bit as it serves such an amazing contrast to Hron, to the world I did not yet know I was off to see.

My walk took me through the docks and their attendant horrors of press gangs and bribed officials, through the meatpacking district and the human screams that were so often indistinguishable from the death cries of slaughtered beasts. I walked through Strawmarak Square, where the nobility and merchant houses attend theatre, defended from the protestations of the poor by means of policemen with sticks and guns. I walked the edge of Royal Park, where, scattered among the birch groves, were the sorry lot who'd been left with little to sell but sex. I walked past men at work and men without work, past children playing games like "nick a wallet or you won't eat tonight," past barkers and buskers and scavengers and skips, past cripples and beggars and whores, past dandies and gang fights, past lamentations and sorrow and the strange joy one finds in the daftest of places.

In short, I walked through Borol. And I didn't suppose I would miss it.