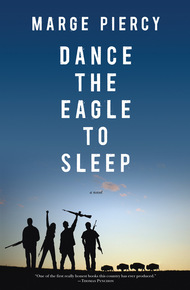 Marge Piercy is the author of seventeen novels including the national bestsellers Gone to Soldiers, Braided Lives, and Woman on the Edge of Time; seventeen volumes of poetry, and a critically acclaimed memoir, Sleeping with Cats. Born in center-city Detroit, educated at the University of Michigan, the recipient of four honorary doctorates, she has been a key player in many of the major progressive political battles of our time, including the anti-Vietnam War and the women's movements, and more recently an active participant in the resistance to the war in Iraq.

Dance the Eagle to Sleep by Marge Piercy

Originally published in 1970, Marge Piercy's second novel follows the lives of four teenagers, in a near-future society, as they rebel against a military draft and "the system." The occupation of Franklin High School begins, and with it, the open rebellion of America's youth against their channeled, unrewarding lives and the self-serving, plastic society that directs them.

From the disillusionment and alienation of the young at the center of the revolt, to their attempts to build a visionary new society, the nationwide following they gain and the brutally complete repression that inevitably follows, this is future fiction without a drop of fantasy.

At age eighteen, Shawn was officially loved by sixty thousand four hundred and eleven girls registered in his fan clubs. His parents found this bizarre and in questionable taste, along with the change in spelling of his name from Sean. If they had been less permissive, they would have stopped the whole episode. Shawn was the second generation born out of the Church, and his name was a sop to the quarter Irish in him. His father was a partner in a prestigious Philadelphia law firm. His mother owned buildings, had studied psychology and been analyzed by Jung, and was still beautiful in a gaunt silvery way. For a rock singer, Shawn was enormously protected and counseled and underexploited.

All three members of The Coming Thing—Frodo and Shep and Shawn—went to the same prep school, where they roomed together and kept up their grades to acceptable levels. When they had to miss exams, they made them up as a group. Their concerts were scheduled inside the rhythms of the school year, and they recorded intensively over vacations. Of course they had their share of bad scenes—oversold concerts in dingy halls with mushy acoustics and twitchy lightshows, and now and then a producer would try to chisel them out of their take. But on the whole, they were exploited as a careful investment, not as a quick-turnover commodity.

Falmouth was ossified in comparison to the primary school they'd all gone to as kids. That was a school almost without walls, a beautiful place with human teachers, and they had played mathematics and music and rattled on in French and German together since they were fat sloppy toddlers.

I am not an ice cube or a stone,

I am not an ice cube or a stone.

Honey, even teddy bears don't like to sleep alone.

At Falmouth, they were popular but aloof. Frodo called it the Pimple Farm. The lead guitar, Frodo was small and squat and mean-looking and by far the most talented musically. He saw the world as a series of references to earlier rock and rhythm and blues. He was rough with the groupies sometimes, and perhaps Shep and Shawn could only remain in contact with him because they had had that common childhood. Shep was slender and fair with long fine brown hair, as much dandy in his dress as he could get away with at any given time, the only one who ever took an interest in their finances.

At Falmouth, the other boys had hang-ups. Shawn was at ease with his creativity, at ease with his brain, at ease with his body. His first sex had happened with Melanie Clinton, whose father made airplanes. She was a year older but in the same language group: they had no formal grades. They got undressed under the sprinkler in the garden of the Clintons' summer home on the Jersey shore. Melanie was as blond as he was, and they had both just begun to have pubic hair, golden under the sun as tiny wires from jewelry making. She had no breasts, and they were both coffee-tan and fishbelly-white.

"It's so cunning," Melanie said. "I wish I had one like it." They both laughed, because they understood she was saying something the school psychologist would seize on. They tried to perform what they understood of the sex act. The water made her slippery, and there really seemed to be no extra room. Still, it was pleasant and exciting as he lay on her cool slippery body with the droplets from the sprinkler and the sun on his back, warm and cool, warm and cool.

He finally accomplished it with her later that summer on the shore. In the twilight, their bodies were pale and warmer than the air, though the sand was still warm under them. He tried kissing her but he was awkward. It seemed silly, faking it, as if they were pretending to be adults. It was better to play with each other. He stretched her with his fingers, and finally he got his prick to slide in. They moved around and worked out the ways that felt good. He kept at it till she got sore.

He was too young to go out with her, and anyhow they were both very busy. A liberal school didn't mean an easy one. But they were both in band, and sometimes after rehearsals they would hang around and screw on their nested coats. Melanie did not like the word fuck. She said it had negative connotations. He thought fuck but said screw to please her. He was playing drums then, and she played clarinet. Sometimes when they were rehearsing, he would get a hard-on looking at her and hoping. In the middle of the spring her periods started, and then she was afraid to, so that ended that.

I need you, gal, to hold down the dark half of my bed.

My back gets cold, I might come down with flu,

My front gets cold, I might come down with flu,

Don't want no electric blanket, all I want in bed is you!