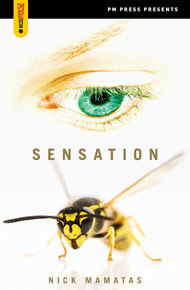 Love. Politics. Parasitic manipulation. Julia Hernandez left her husband, shot a real-estate developer out to gentrify Brooklyn, and then vanished without a trace. Well, perhaps one or two traces were left... With different personal and consumption habits, Julia has slipped out of the world she knew and into the Simulacrum—a place between the cracks of our existence from which human history is both guided and thwarted by the conflict between a species of anarchist wasp and a collective of hyperintelligent spiders. When Julia's ex-husband Raymond spots her in a grocery store he doesn't usually patronize, he's drawn into an underworld of radical political gestures and Internet organizing looking to overthrow a ruling class it knows nothing about—and Julia is the new media sensation of both this world and the Simulacrum.

Told ultimately from the collective point of view of another species, Sensation plays with the elements of the Simulacrum we all already live in: media reports, businessspeak, blog entries, text messages, psychological evaluation forms, and the always fraught and kindly lies lovers tell one another.

AYMOND saw his ex-wife twice—both times by accident—in the first few months after she went into hiding. The context in which Raymond first saw Julia after her murder of Peter Neads Fishman was so bizarre to him that he didn't even realize it was her at first. She was at the Food Emporium on the corner of West 12th Street and Sixth Avenue, where she never ever shopped before, and her shopping cart was stocked with items he knew she didn't eat.

She even wrote a check, pulling her checkbook from the purple purse—Purple! thought Raymond—and filling out every line while two of the other customers behind her silently fumed. There was a third customer too, a large man of indeterminate ethnicity in whose emptied-out brainpan we rode. We cradled a gallon of skim milk like it was an infant and waited more patiently. Raymond had thought she might have been someone from high school, or maybe even the television, until she smiled at the oblivious cashier and, in response to his clipped "Have a good day," said what Julia always used to say:

Half acknowledgment, half farewell, that's what Julia had been like. She had a way of looking at Raymond, at anyone with whom she was speaking, really, that made him (or them, or you, and once even us) feel like the most important person in the world, but only so long as you kept proving it to her every few seconds. By nodding intently when she spoke. By feeding her windups for her punchlines. Raymond might fuss over some story he'd heard on NPR about the Gaza Strip and how one-state solutions to the crisis seemed so unfeasible and she'd say, "Well, you can't expect the world to give the Palestinians their own land. Look at how they live." She'd smile a statue's smile for a second and then burst into laughter at his chagrin. Then she'd move on to some other topic, or, ultimately, some other person or way of life so profoundly challenging to the status quo that we had to step in; we had to bring her from her world into ours.

In a flash, Raymond realized something, just from the twitch and curve of the pen in Julia's hand. She'd finally stopped using his surname, Hernandez, and was back to Ott. Whatever life she was living now, he was not in it. Raymond started shopping at the Food Emporium every day. He never saw Julia there again, but did frequently run into the man of indeterminate ethnicity. Vaguely Asian, but no. Saami perhaps, Raymond almost decided. He hated his tendency to pigeonhole, despite the fact that he could muster some professional interest in the subject of ethnicity and physical anthropology. He taught at City University of New York's City College. He'd published articles about the conflation of Gitano, Roma, and Travelers in dominant cultures. He also shared a laugh with Julia whenever she used the name Hernandez, which would sometimes fluster and annoy drug store clerks and the like.

"Julia looks like an icicle," Raymond's mother once complained. "An icicle topped with crabgrass hair." Julia had even gotten a minority scholarship to return to grad school—MBA of all things—since no college would dare question whether or not she was actually Hispanic. A discreet inquiry? No. Genetic testing? Out of the question. Julia left school before graduating anyway. And yet, there Raymond was, struggling with the large man of indeterminate ethnicity.

The man's ethnicity was indeterminate by design, thanks to careful breeding, the manipulation of both genes and diet, and a large amount of tubiliform silk andchoreography. We live inside his left ear, and in many other places. We kept an eye on Julia, but we also now had to keep an eye on Raymond.

He'd been at the Food Emporium that day because he'd suddenly been caught up in the memory of the texture of Entenmann's Rich Frosted Donuts. The way the chocolate coating, hard and plasticky, split on his tongue. The meat of the doughnut, thick and spongy like it was made a day old. Objectively, these were not the qualities Raymond enjoyed in doughnuts. But that day he was slain in the spirit of Entenmann's Rich Frosted Donuts, and Whole Foods doesn't carry them, so there he was at the Food Emporium.

Raymond thought he'd glimpsed Julia around town several other times before finally deciding to track her down. But he couldn't be sure it was her. There Raymond was, sitting on the other side of and across from her on a train car on the M line when he had to go to a dentist in his network because his regular dentist was on vacation.

And there Raymond was at Edson Carvalho Brazilian Jujitsu and Judo, staring out the second-story window during his free lesson, panting and drinking his own sweat, when she wandered by, a patch of crabgrass navigating the flesh of the streets below. She was headed east, deep into the Gramercy neighborhood that had previously been too boring for Julia.

Bellevue is out that way, isn't it? Raymond asked himself. Then he felt a tug on his borrowed judogi and returned to the mat to practice being strangled.

And there Raymond was, at 11:11 p.m. on a Thursday night at Times Square, after just having left a performance of a revival of How To Succeed In Business Without Really Trying with a woman he'd not see again after one tepid kiss and her quick sortie down the steps of the subway station, looking up at the huge digital displays of stock prices and headlines and the president's giant low-resolution head, noting the time and making a wish as he always did whenever he saw it was 11:11, and there was Julia next to him, chin high, doing the same, as she used to do when they were together. As she taught him to do when they had met ten years ago, on their first date. That was an 11:11 a.m. This time, this 11:11 p.m., he knew it was her.

You might think Raymond turned to say something and Julia was gone. That's how it goes. And he turned to face her, but she was gone. Raymond stood alone under the throb and thrum of Time Square's electric cathedral. But no, Julia was still there, and she smiled and put her eyes wide, expectantly, and I was behind them, in my large man of indeterminate ethnicity, ready to push Raymond into traffic, to end him right then and there, but his autonomic nervous system was wiser than his heart and he ran.