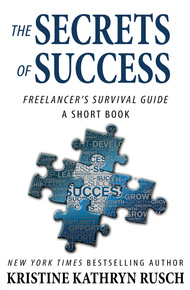 The Secrets of Success by Kristine Kathryn Rusch

Once you've become successful, you never have to work again—or so many people believe. But becoming a success is just the start. Staying a success is the hard part. This short book will help you both become a success and remain one.

International bestselling author Kristine Kathryn Rusch will show you the secrets to success that will change your life.

Success seems like such an easy topic. Easy to live with, easy to handle. But it's not. More people fail in the middle of their success than you would ever expect. Most of us aren't trained to succeed. We're trained to get by. Believe me, those two ways of approaching the world are diametrically opposed.

The tips in this short guide should prevent you from turning your success into failure. This entire book was initially published in five sections for my blog, The Freelancer's Survival Guide. The entire Guide is available as both an e- and a paperback book. But this piece will work better if you remember it was initially published every Thursday and written in real time during October of 2009.

The Secrets of Success is part of the Freelancer's Guide Short Book series. I carved some of the entries in the Guide into short books because not everyone wants all of the advice in the larger Guide. Sometimes people buy how-to books for one small section. If you're one of those people, then this short book is for you. I hope it answers all of your questions about success.

If you want to see how others responded or if you want to see the original posts, go to my blog, kristinekathrynrusch.com, and click on the Freelancer's Survival Guide tab at the top. That will take you to the table of contents. The success posts are clearly marked.

Enjoy this short book. I hope it brings you a lot of success.