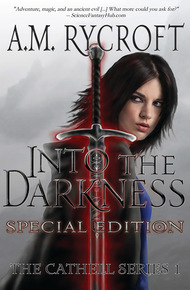 A.M. Rycroft is the award-winning author of multiple dark fantasy books and horror stories. She was born and raised in Pittsburgh, PA, so naturally, she loves binge-watching hockey and football, and bleeds black and gold each time she gets a paper cut. Other hobbies include ignoring her inbox as long as possible and adding to her collection of Funko superhero bobbleheads.

Into the Darkness - The Cathell Series Book One by A.M. Rycroft

Aeryn Ravane needs the sword to repay a blood debt, but it guards an unimaginable evil, buried long ago by the gods.

She chose the gray path of a sell-sword over that of a hero like her father. When he died, however, Aeryn chose to fulfill her debt to him by finishing his last quest. She just never suspected that taking up his search for the sword bound by a legendary curse would open a dark portal and bind her and an innocent to the same fate.

Coins scraped under the sell-sword's boots when she spun around, drawing her sword as she did so. Theo pressed her hands over her mouth, not even daring to breathe now.

The woman shouted, "Show yourself!"

Theo's heart hammered in her chest as the sell-sword's steely gaze slid over the circular chamber, past the entrance where Theo stood, hidden in plain sight by the bracelet she wore. She felt sure the pounding in her chest would give her away, but it did not. A frown crossed the woman's face as she waited for another sound or movement that would betray Theo's presence. The young thief did not oblige.

Finally the woman resheathed her sword, but Theo could tell from the crease in her brow that she did not believe for a moment she had imagined what she heard. Theo silently cursed herself. She would have to be extra vigilant now about keeping her presence hidden.

Her fingers played with the leather and bead bracelet on her other wrist, just below her dirt-stained shirt sleeve. The magik bracelet was too big for her thin wrist, but it was all that stood between her and failure, and she could not afford to fail with this job. Brien's life depended on her getting the sword before the sell-sword.

Theo waited until the woman left the room, heading down a new corridor—one thankfully devoid of any creepy doors—before she dared to move again. She counted to five before she followed the woman down the corridor. The soles of her broken-down boots made no sound on the stone floors.

Theo stopped when the sell-sword stopped, at each and every junction, marking each new room and corridor on the map she was creating. The sell-sword was meticulous about her lines. Theo noticed that every so often, as she sketched, the woman's brow furrowed more deeply and her hand would shake.

The tic did not seem to be caused by nervousness, though Theo could see tension in the set of the sell-sword's shoulders. Something else seemed to bother her when she was drawing. Perhaps it was related to whatever made her pause sometimes and tilt her head, as if she heard something.

Theo knew it could not be any sound she made. The woman would have caught her by now, if so, and shown her the business end of her sword.

Theo's attention started to wander when she followed the sell-sword into yet another corridor, past open chambers much less interesting than the room with all the gold. Most were work spaces or vast libraries filled with tomes and tables piled high with dusty, rolled-up scrolls. She could not even begin to imagine why anyone would want to collect so many books and pieces of crumbly parchment. In her experience, books rarely had a sellable value. Then she thought back to what little she knew about the history of the Black Caverns. If the tomes and scrolls were magikal or contained spells, then they might be worth a little something. A handful might fetch a pile of gold coins.

But then, why bother snatching something that she could not easily carry back to Valis? The sword would be heavy enough and probably almost as tall as she was. Getting it out of the valley and back up the mountainside would be a chore in itself without adding dusty scrolls that would probably just make her sneeze anyhow.

When Aeryn paused again to update her map, Theo sighed to herself. She let her eye wonder to a nearby doorway. Through it, she could see weapons and armor stored on moldering wooden racks. A few racks had fallen apart with time, and their contents were spilled across the black stone floor.

The subtle glow from a long chainmail shirt hanging on one of the standing racks caught her wandering eye. Without thinking, she left the passageway and walked toward the chainmail. The glow told her it might be enchanted. The scrolls might not be worth the effort to haul them back to Valis, but enchanted chainmail definitely would be.

A smile crossed her face as she tucked strands of her dark blond hair behind an ear, considering how she would get the chainmail out of the caverns. It was far too long for her short frame and looked quite heavy. But when she grabbed hold of an edge of the chainmail, it felt as light as a feather.

Her eyes grew wide. It was enchanted!

Before she could decide whether she could get the chainmail off the rack without the sell-sword noticing, she heard a scraping sound, like something heavy sliding open. She turned slowly, looking over her shoulder. Then she froze.

She swallowed hard as a scream rose in her throat. Before she could give it voice, a sticky glob shot across the room, striking her and knocking her flat.