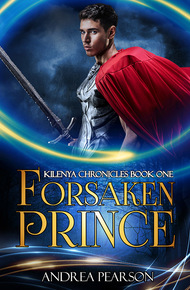 USA Today bestselling author Andrea Pearson has been a leader in the indie author arena since early 2011, with 50+ books under her belt and over a hundred articles for professional blogs and websites published. She's a host for the Self-Publish Strong podcast that focuses on both marketing and craft, and she's a cohost of the Six Figure Authors podcast. She offers multiple online courses that surround her favorite topic: marketing.

Andrea was executive director for Indie Author Hub for a year and a half, and she is frequently invited to teach how to reach readers through both advanced newsletter marketing tactics and successful promotional campaigns at conferences and conventions. She has been interviewed on the Science Fiction and Fantasy Marketing podcast, the Rocking Self-Publishing podcast, and the Author Hangout. She has guest posted on JA Konrath's A Newbie's Guide to Publishing blog, and her tips have been mentioned several times on the Sell More Books Show.

Sometimes magic comes to those who least expect it . . .

Jacob Clark doesn't have time to believe in fantasies. He goes to school, works his after-hours job hard, and does what he can to keep his family above water. So after a mysterious girl tells him he's a prince from another world, he laughs the story off as fiction. But when his family is kidnapped by very-real attackers, Jacob has no choice but to team up with the girl to get them back . . .

In just 48 hours, Jacob must cross worlds to retrieve a magical key and rescue his family. With only the girl's misfit band of traveling companions and his own untested abilities at hand, the quest seems doomed to fail. But this is one job he can't bear to lose. To save his family and the kingdom, he'll have to live up to his princely legacy . . .

Forsaken Prince is the first book in a series of teen epic fantasy. If you like original magic systems, imaginative monsters, and fast-paced action, then you'll love Andrea Pearson's series. Read Forsaken Prince today to join an epic quest fit for a prince.

The lights inside Jacob's home were off. That wasn't normal. Mom always kept lights on. She would rather pay an elevated electric bill than live in a dark house.

Jacob flipped the switch. Nothing happened. He stepped inside, and something crunched under foot. He looked down. He'd stepped on broken glass. Jacob glanced around the room. All the bulbs had been shattered—the lamp near the front door, the overhead light, and the lamps on the shelves by the piano. Nothing else was broken.

His heart did a little flip, and foreboding settled over him. What had happened?

He stepped into the kitchen. Everything there was broken—not even the battery-operated clock on the wall was still ticking.

Jacob's breath caught when he spotted blood all along the edge of the counter.

In a rush, he searched the rest of the first floor, then bounded up the stairs. He didn't get far before stumbling to a halt. A huge body was sprawled across the top of the staircase. Jacob gasped, stepping back involuntarily, and nearly fell down the stairs before catching himself. It wasn't human. It couldn't be. No human looked like that.

He clung to the railing, staring at the dead beast. What the crap was it? The thing was huge. Humanoid, with stubby, muscular legs, massive arms, and four fingers on each hand. The wall all around it was splattered with blood and marred with spray from a shotgun.

The creature wore dark leather pants. It wasn't wearing a shirt, and Jacob nearly wretched as he stepped up the stairs and saw a huge gaping hole in the thing's chest. More blood slicked down the stairs and pooled beneath the beast.

The entire thing was covered everywhere with very short hair. Spikes jutted out from the lower jaw, coming to sharp points about two inches from the chin. The eyes had rolled back in the head, the lids open.

Jacob stumbled up the stairs, trying not to touch the creature or its blood. Were there more of those things in the house? Was he in danger? And where were his parents?

His breathing came in pants and gasps. His dad's shotgun lay in the hall near the top of the stairs. Shells—some empty—were scattered across the floor. Jacob grabbed the gun and several of the shells, fumbling to load the weapon in case he needed to defend himself.

Someone whimpered, and he rushed down the hallway. He passed another one of those beasts, this one missing a head. His stomach flipped. He refused to look at the gaping neck.

"Hello?" he called out, clenching the shotgun. "Mom?"

His parents' room was empty. He barely glanced into his and Matt's separate bedrooms before pausing in the doorway to Amberly's. A familiar figure huddled on the other side of the princess bed, and he gasped.

"Mom!" Jacob rushed to her side, dropping to his knees. He set down the gun and placed a hand on her shoulder.

She jumped, shrinking against the wall, her hair falling over her face.

Mom slumped in relief and sobbed. "I'm so sorry."

He gently pushed her hair away from her face, then startled. She was covered in blood. Bruises were blossoming across her cheeks and neck.

"What's going on?" he repeated.

"Where are Amberly and Dad?"

"The Lorkon." Mom's eyes cleared as she concentrated on her son's face. "They sent their servants. Your father and sister have been taken. You must go get them!"